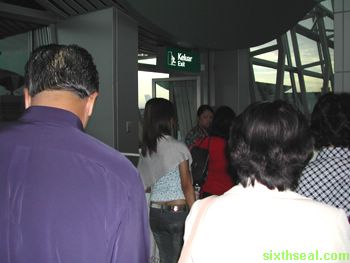 Well, I’ve got an interview scheduled on Monday, the time isn’t
confirmed though, so I’ll have to call earlier to confirm the time.
Does anyone know the easiest way to go from Bukit Bintang (heart of BB)
to 27, Jalan Tun Ismail via public transport? How long will the journey
take? Anyway, I have armed myself with Mapopolis [mapopolis.com] and map of KL [virtualmalaysia.com], and there’s always a taxi if I can’t get there.

Anyway, I’ll only be able to update very sporadically in the week
starting tomorrow, daily posts is likely, but without photos. My
digicam is still broken, most recent photos have been taken using a
webcam or is from my personal stock photo collection – the random shots
I take while carrying my digicam around. The plan is to get Nikon
Malaysia to fix it or to get another one, probably the latter though,
because I can’t justify the price to fix it when a better model can be
had for a little more. Anyway, we’ll see about that. FYI, veritas sends
word that he won’t be posting for this week too, in consideration of my
quest for employment, but he’s got “experience reports (all with
photos) of buprenorphine (without naloxone), pentazocine (also w/o
naloxone), triazolam + several other benzos and a wierd zolpidem
experience, basically quite a few from The Wonderful World of
Pharmaceuticals and one rare illicit that is long due (methcathinone –
experience report ONLY)” after this week or when I get a job, whichever one comes first. 😉

Well, I’ve got some last minute packing to do and I’ll also have to
read up some stuff in preparation for my interview, so till next time,
see ya everyone. My apologies for not being able to reply the comments
today, but I’ll do that next time I update. Thanks!