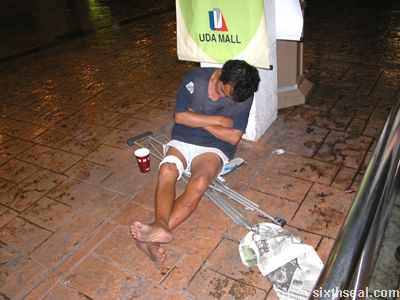 It all started at around midnight today (that’s Friday night, it’s
still Saturday now). I happened to be at the Sungei Wang area and saw
this apparently destitute guy sleeping at one of the support beams. He
doesn’t seem to be in top physical condition as well, from the crutches
he was using. Anyway, I gave him RM 2 (that red drink container is the
receptacle he was using for this purpose) and took several photos of
him. 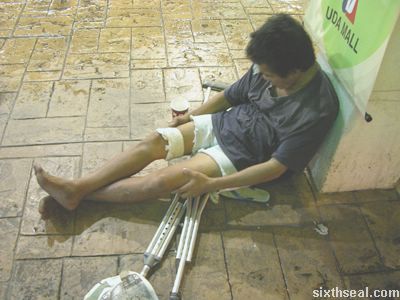 Anyway, he didn’t mind being photographed, and he was going on about
how his legs hurt and he kept on dozing off in the middle of the
sentence so I figured I’ll leave him alone after taking the photos. I
was still in the area though, was talking to some people when two
police came up, one male and one female and stopped beside the guy. 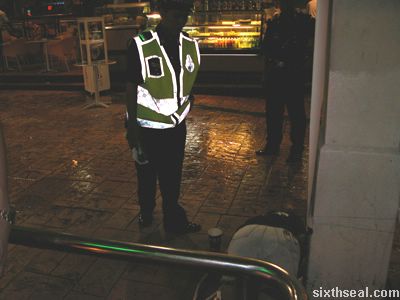 The female police is the one wearing the jacket with reflective
strips. She proceeded to rouse the sleeping guy by kicking him…now, I
understand that there are laws against these situations, but obviously
the guy had some sort of injury from the bandage on his leg so
personally, I didn’t think that was necessary.

Anyway, I had my digicam slung around me like always and I
immediately started it up and started taking photos of the scene.
Unfortunately, my digicam defaults to red-eye correction flash upon
startup, so the photos are really terrible, since my position allows
too many reflective materials into the frame eg the metal railing, the
strips etc. I couldn’t use no flash since everyone was moving, so going
without flash would result in a blurry photo.

The ideal setting would be fast/quick flash but I didn’t have time
to change the settings before the law enforcement officers managed to
get the guy to move. Now, obviously taking photos with red-eye
correction flash is not very discreet since there’s a pre-glow before
the actual strong flash. This did not go unnoticed by the police,
especially since I took several photos in quick succession. 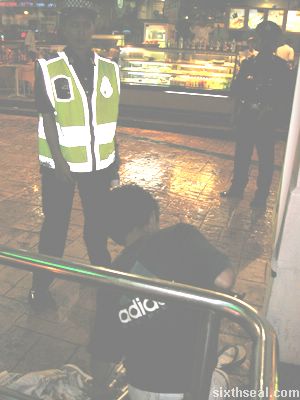 The male policeman walked up to me and asked “Ambil gambar itu untuk
apa?” (“Why were you taking photos?”). Now, here’s the funny thing…I
should be worried about a law enforcement officer standing beside me
and looking at my digicam, especially while I was putting it back into
the carrying case, which does not only store an extra CF card, a spare
battery and another USB cord, if you get what I mean.

He was obviously waiting for an answer…I should have been
concerned since the carrying case was open and at a slightly higher
angle, ThingsTM which would not pass the scrutiny of the police would be visible and the ThingsTM in question would be enough to get me into a fuckload of trouble. To top it off, I had More ThingsTM in my backpack! Either ThingsTM or More ThingsTM would have resulted in shit hitting the fan on their own, and two collective ThingsTM…now that’s should have make me a little anxious to say the least.

Strangely, I did not even feel so much as an iota of mild
trepidation, which was surprising since it’s my 3rd day without sleep
and paranoia usually sets in around that time. I was completely calm
and worry free. I zipped up my digicam carrying case, slung it back
around me, grinned at the policeman, gave him a friendly pat on the
shoulder and said “Oh, tak ada apa, ini untuk koleksi sendiri sahaja.”
(Oh, no reason, just took it for my personal collection.”). I gave him
another big grin, waved and walked away, leaving him smiling in a
decidedly puzzled fashion.

Disclaimer: The usage of the words ThingsTM and More ThingsTM in this post refers to a counterfeit digicam battery and several pirated DVDs respectively, which may not be legal. ThingsTM and More ThingsTM
are not to be interpreted as an allusion to any illicit substance,
because I do not possess anything like that. I reiterate that it’s just
a counterfeit digicam battery and several pirated DVDs. However, you
should neither be bringing ThingsTM nor More ThingsTM around, regardless of what tangible objects the words refer to. You never know who you’re going to bump into. 🙂

In hindsight, drawing attention to yourself from the police by
taking full flash photos of them in action is not a very bright thing
to do when you have ThingsTM and More ThingsTM in
your possession. I would not do it again, I thank my parents for the
genes which allows me to be real friendly when the need arises, the
“Hey, buddy, how’s it going?” kind of friendly, and also for a
relatively innocent looking facial profile with a repertoire that
includes a Shit Eating GrinTM, which seems to be rather effective in diffusing situations like this. =D

I didn’t even get good photos due to the flash going off so
hard…it’s a good thing luck was on my side. Even though taking photos
in public is perfectly legal, dealing with police here requires a
delicate assessment of the situation and a careful evaluation of the
psychological state the policeman in question is in, to either:
1. Be real friendly
2. Act submissive
3. Appear to be busy
lest they get sudden and uncontrollable urges to question you and
search your digicam carrying case and your backpack and take you in,
which is not unheard of in my hometown, but I’ve not had that happen in
KL so far.

I’m glad I made the right profile projection and chose #1. I think
it was that friendly pat on the shoulder that closed the deal. 😉 Hail
Mary!

Oh right, I added something new in the sidebar, look under Photo
Gallery. No flames please, it’s only for people who want to. :p I’m not
sleepy but I shall brute force myself into a state of slumber now, lest
I go into Day #4 without sleep. I will reply the comments tomorrow, I
bid thee farewell and good night.