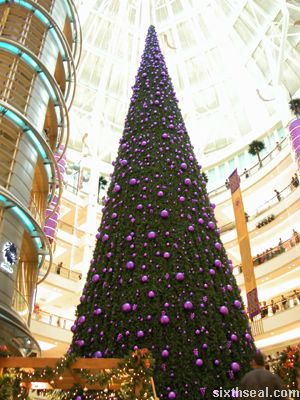 Behold! I am one! I tricked you all.

It’s so obvious that we (meaning me and veritas) should be beheaded
for even mistaking it. There were never two or three trees. There was
only meant to be one. If you squint a little (though squinting isn’t
really necessary once you’ve seen the light) you can see that the
coniferous objects starts to become smaller in circumference, and
together with the unfinished top (which AlCee
[tripod.com] pointed out), it might be obvious to someone of a superior
intellect and/or observational skills that the 3 trees were meant to be
stacked on top of each other to form one gigantic, disturbingly pointy
and phallic looking Christmas tree. 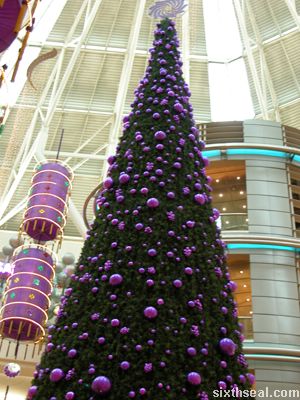 AlCee, it has both a top with the Suria KLCC decor… 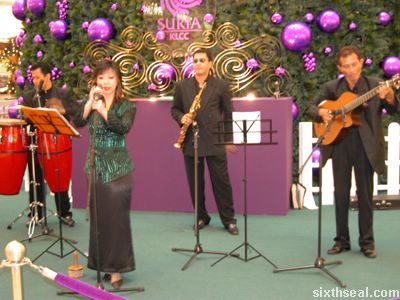 and a bottom. With performers to boot.

However, that still doesn’t change the fact that Suria KLCC
duped me into believing there were three trees in the first place. I
just realized yesterday (Friday) on the way back. My whole belief
system has been shattered. 🙁 Thus, I am going to stop patronizing the
place in protest! Well, except for the necessary passing through during
my daily commute that is. *cough* It’s like if one day I go “Hey guys,
sorry for misleading you all, but there never was a veritas in the
first place…”. You’ll be going wtf and “That’s it, I’m out of here.”
and all that too. 😉

Anyway, enough nonsense…just got back from Bukit Bintang, will
post up photos of that event in front of Low Yat just now later. I
won’t be going anywhere tonight, I have heaps of things on my “To Do”
list, starting with writing my long due The Weblog Review review and
ending with a through cleansing of my wallet (which I’ve decided to
bring over). I’ll be flying to Melbourne on Friday! 🙂

Oh and btw, there’s this question for anyone who has the experience
before. I’ve only had experience with Melbourne -> Malaysia, not the
other way, so just to be sure. Anyway, I have a Schedule 4 (Australia)
prescription which I have to bring over. It’s 100% legitimate, I’ve
explained the situation to the doctor and he says to get customs to
call him if there are any problems. It’s a go right? A few concerns:

1. He doesn’t work Saturdays (which is when I’ll be arriving in Melbourne).
2. The prescription does not have the name of the substance, only “morning” and “night”.
3. I have to declare it and I’ll have to say what it is and the tablets
are generics (one local and one popular recognizable generic brand).

I mean, it should be okay, since it’s just Schedule IV and it’s
legit after all. No problems right? I just don’t want to be given the
third degree and have sniffer dogs all over me, ya know. I probably
won’t through, I’ve brought flunitrazepam (Schedule 8) and clobazam
(Schedule 4) back to Malaysia before, no one even blinked or showed any
interest, but this is going the other way.

Disclaimer: The flunitrazepam was disposed of in-flight since it’s illegal in Malaysia.

I’m not going to state my prescription here since a lot of people I
know in real life read my blog, the schedule should be enough
information and not bringing it over is not an option since…well,
don’t ask, it just has to go with me that’s all. Thoughts? No problems
right?