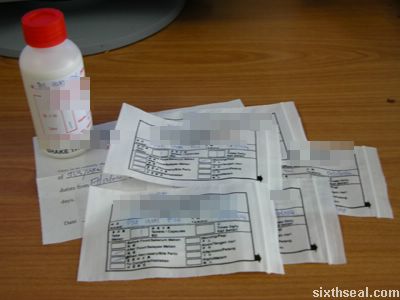 My apologies for the lack of updates yesterday…I had to take sick
leave due to food poisoning. I was throwing up the whole night and sat
on the porcelain throne for longer than I cared for. I called my CTO at
7:30 am to tell him I’m going to see a doctor and headed out to search
for a clinic.

I didn’t know what caused the food poisoning coz I ate:
1. Pork leg rice
2. Kampua mee
3. Mee Jawa
No, seriously, I ate all three (at different times, obviously) during the course of last night.

Anyway, I intended to head to the Saberkas area to look for clinics
but I took a wrong turn and ended up somewhere else (where exactly, I
will not reveal due to reasons which will be clear later). I tried to
drive back when I noticed a clinic. Why not, I thought, and I went in
and told the doctor about the food poisoning. He gave me some pills for
diarrhea, colic, antibiotics and milk of magnesia together with a sick
leave certificate. 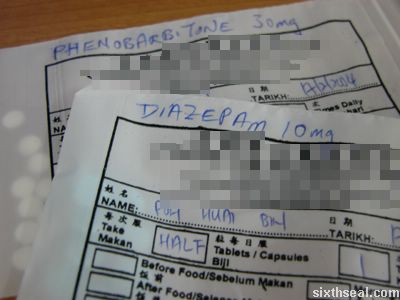 Now, there is a discrepancy between the medications I just mentioned
and the ones in the first photo. 🙂 The other two are shown above. =D I
figured it wouldn’t hurt to try and hit the doctor for some
benzodiazepines so after he gave me all that stuff for my food
poisoning and wrote me the MC, I brought up the issue. Please note that
I didn’t plan ahead and just wore a T-shirt (visible tattoos, usually a
no no while doctor shopping here) since I didn’t decide to ask for
benzos till the last minute. To my great delight, it was fucking easy,
excuse the profanity, I’m exalted at the permascript I got from this
doctor. 🙂

Me: Oh, yeah, there’s another thing. I just came to Kuching
from KL and I’ve been on benzodiazepine therapy for 4 years. I’m
running out of medication and I was wondering if you could help with
this.

Doctor: Benzodiazepines? Yeah, I have those. What did you take?

Me: I take 2 mg clonazepam mornings and 5 mg nitrazepam at night.
(That’s not my actual dose – I didn’t want to shock and awe (and alienate) the doctor with my real dose.)

Me: Yeah, I’ve been on it for 4 years so…you know, there’s the tolerance issue…

Doctor: I understand. Well, I don’t have those here, I only
have Valium…if you want the ones you’re currently taking, you’ll have
to see (psychiatrist name). But I can give you Valium if you want.

Me: Diazepam…yeah, thanks doctor, that would help, appreciate it. Do you have any other benzodiazepines?

Doctor: Unfortunately, I only have diazepam…oh, and I’ve got phenobarbitone too.

Me: Oh great, can I have the phenobarbitone to replace my morning dose and diazepam to replace my night one?
(Phenobarbitone aka phenobarbital is a (very weak) barbiturate which
I’ve taken before, but never done a review on, and taking only diazepam
from this doctor would be a little boring, so I went for the pheno as
well. :))

Doctor: Sure…so I’ll give you 30 mg of phenobarbitone and…how much temazepam did you say you were taking again?

Me: Er…I was taking nitrazepam, not temazepam. 5 mg. The equivalency would work out to be…around 10 mg diazepam.

Doctor: Hmm…alright, but I usually replace nitrazepam and
temazepam with a same milligram, but I’ll give you 10 mg diazepam
tablets, try taking half and if it doesn’t help, then take the full
tablet. I’ll still give you 14 full tablets just in case.

Me: Thank you very much doctor. So…I’ll see you again in two weeks to get a refill?
(Testing to see if the script was permanent)

Doctor: Yup, just come to me in two weeks and I’ll give you
more tablets. Or you could just give your card (the ones that they give
registered patients) and tell the nurse to refill it without having to
come in. I’ll write a note in your history.

Me: Thanks again, I really appreciate your help doctor.

Doctor: No problems at all.

🙂 This is doctor shopping #3 (first one is the nurse bribing
fiasco, second one is for clonazepam and lorazepam which I haven’t
written, third is this, which was unplanned for, but worked out fucking
well, pardon my French). 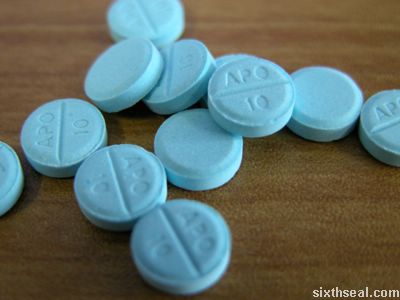 Anyway, these are the tablets for diazepam – generic APO-DIAZEPAM 10
mg tablets. I shall find out the LD50 values for phenobarbitone and see
if I can dump 420 mg at once. I didn’t take that much last time, but
then again, I didn’t have a high benzodiazepine tolerance then, which
IIANM is cross-tolerant with barbiturates. I will also have to find out
equivalencies and see if I have to wait two weeks for 840 mg for a
reasonably recreational experience, since I forgot all about
phenobarbitone dosages. That would happen on the only day I have free –
Saturday night, so report next week on castitas.com.

The wonders that can occur during a wrong turn while driving. 🙂

Regarding my food poisoning, the throwing up has eased up though I still have to sit on the porcelain throne every hour or so…