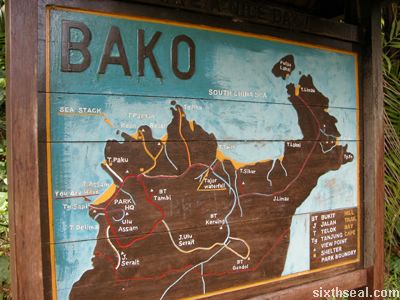 Bako. It was when we were drinking at a coffee shop (discos and
other entertainment venues raided in a show of We Are Doing Something
(TM) to Badawi) when a Drunken Inspiration (also TM) struck – Let’s go
to Damai! Thus, we drove around town (well, not all of us obviously, I
never drive on Saturday expeditions coz I aim to get fucked as) and
went to several hotels and finally Holiday Inn, Kuching to ask for all
the numbers. 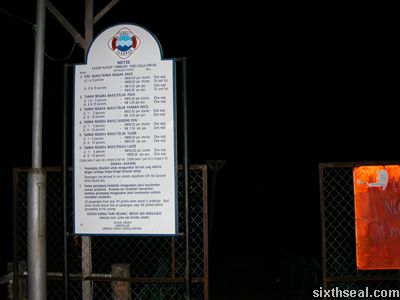 Damai (both resorts) were fully booked due to the long weekend
(public holiday on Monday) and so was Santubong. It was suggested that
we go tomorrow instead for a day trip. Obviously, being in enough such
situations, I knew we weren’t going anywhere tomorrow if we didn’t
leave now, so “Off to Bako!”, I said. =D Despite it being close to 5 am
and boats probably start at 7 am, off we went to pick up Ah Ann. The
four of us arrived at the jetty for boat pickups around 5:30 am. 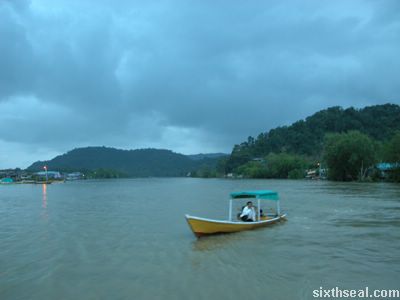 It was dark still and we sat there stoned, I mean, drunk, while
waiting for the first boat to depart. It was beautiful, the sun slowly
coming up and brightening everything slowly, the scene was an amazing
work of art by nature. I was looking forward to taking photos of Bako
National Park. Please note that no substances were consumed besides
plenty of alcohol, barbiturates, benzodiazepines, and wheatgrass
*cough* juice for sustenance. I think it was amazing that so many
sedatives could be taken and still keep us up for so long. 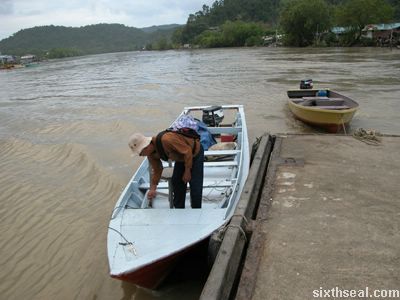 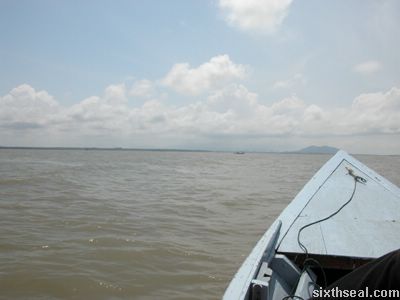 The speedboats did not go as fast as the name suggests, but it did serve its purpose and got us there in about 20 minutes. 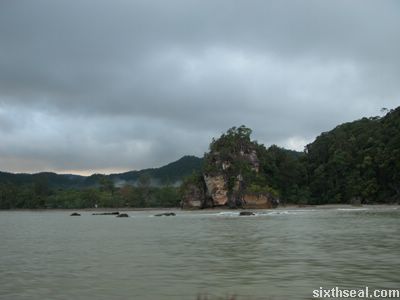 There were a lot of interesting structures (by nature) that we passed on the way to the national park.

The boat driver dropped us off at the jetty: 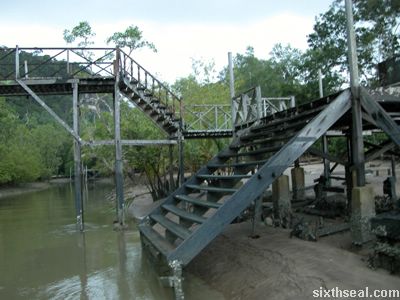 This jetty is only accessible during high tide, the sea water (South
China Sea) recedes far below this point during low tide. We had the
munchies really bad so the canteen was the first destination. There is
only one canteen in Bako, imagine that! 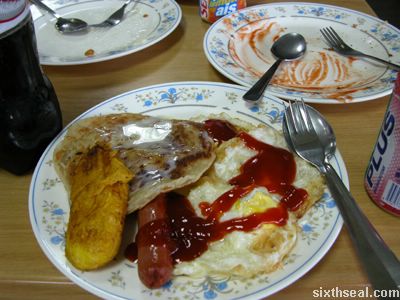 They had sausages, eggs, roti canai (like it with milk), pisang goreng etc and I had two big plates of that. 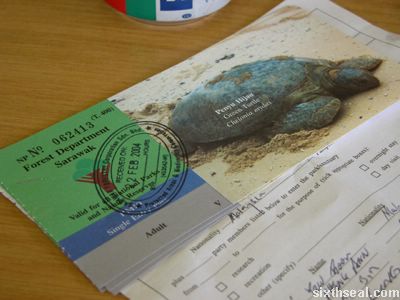 We then went to get registered – it costs RM 10 per person for entry
to Bako National Park on top of the boat fare. We then went on one of
the trails that leads to a viewpoint towards the sea. I noticed that
most of the shots I took were blurry due to a lack of sobriety. It
should be noted that walking on Bako trails while not quite sober is
not exactly the safest thing to do due to the sharp dropoff inclines. 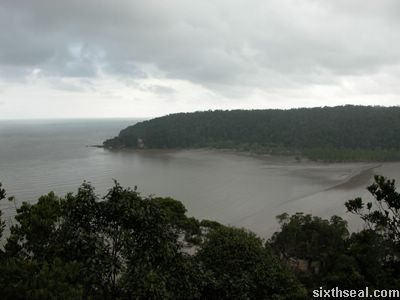 This is the view from the top of the Tanjong Sapi trail. We then decided (unwisely) to go on another more challenging trail. 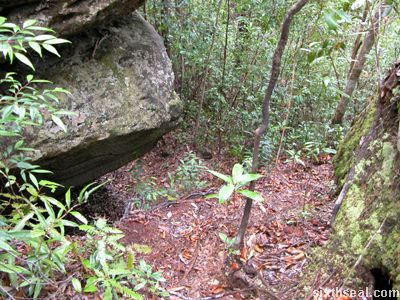 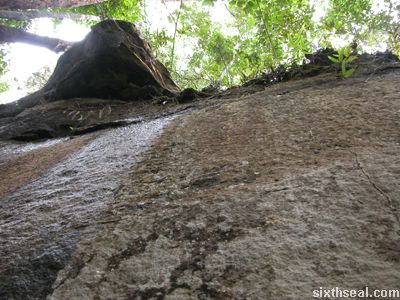 It involved walks around huge boulders with a feet of leeway between
the boulder and a 200 meter drop into the jungle. However, massive
benzodiazepine consumption tends to lead to a nonchalant attitude and
general suppression of any fear triggers (which is where the
therapeutic use comes in) and alcohol leads to a pugilistic attitude,
so off we went (I wonder how many times I’ve used this phrase in this
post). 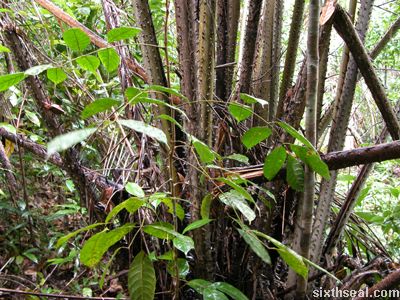 It should be noted that most plants in the jungle have thorns! Fuck.
Many a times, I grabbed into a benign looking vine only to feel my
flesh penetrated by spines. The trail didn’t lead anywhere (think we
got off it at some point), so we went back to base to go on the
waterfall trail. It was too far (5 1/2 hours return trip) for our
scheduled 2 pm pickup so we went on to the mini waterfall near base. 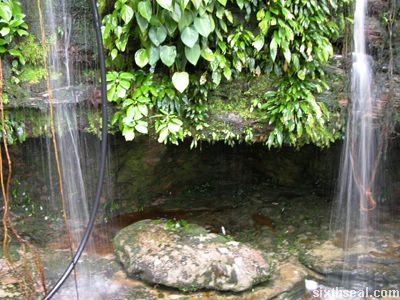 I nearly fell in if not for one of my friends grabbing me while taking photos. You drink, you walk, you spill. 😉

Here are some other notable photos taken at Bako National Park: 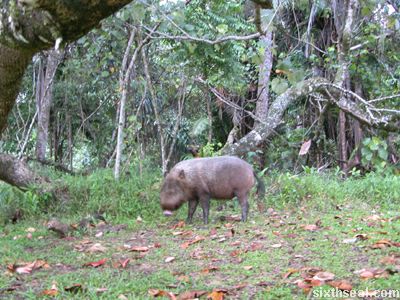 A wild boar roaming through the park. I wonder what it’s thinking. 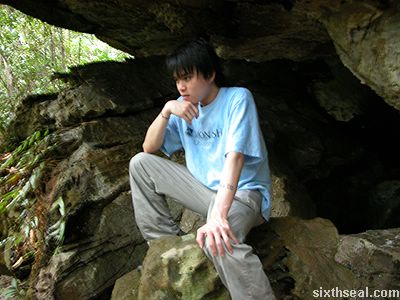 There was some kind of divine statue carved into the limestone that the natives seem to worship. 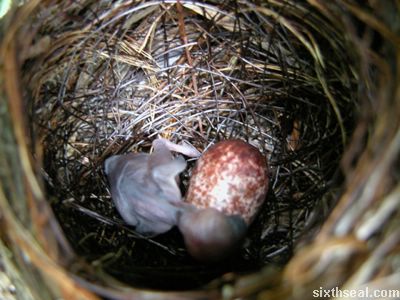 The best photo of the day (week, month even). A tiny featherless bird
hatching out of an egg with another egg by its side. Anyone who takes
or uses this photo without due credit or compensation will be promptly
castrated. 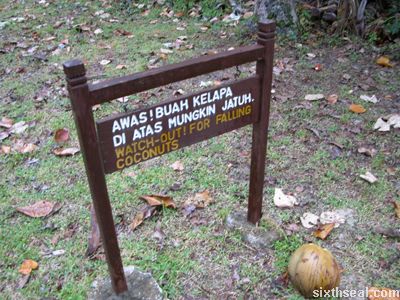 Watch out for falling coconuts! 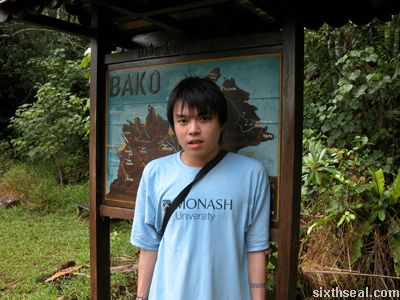 Obligatory photo of me at the Bako National Park sign. My gf tells me
that I must be fat coz if I get thin, she would assume I’m using
methamphetamine again, giving in to the siren calls of “faster,
stronger, better”, “sleep is for the weak”, “be all that you can be”
and all that, thus I have to carry excess baggage… 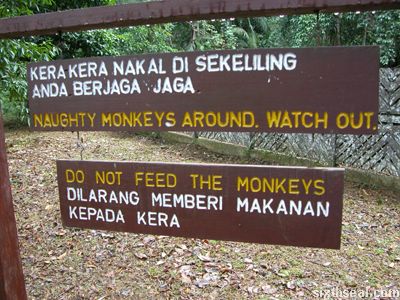 Naughty monkeys around. Watch out. 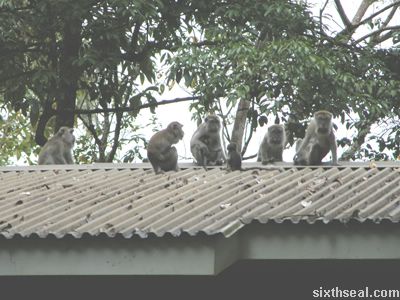 Monkey family on top of the roof of a chalet. Dominant male not too happy that I was eying his mate. 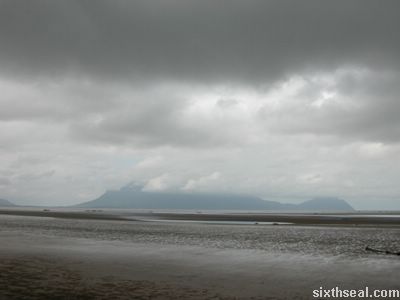 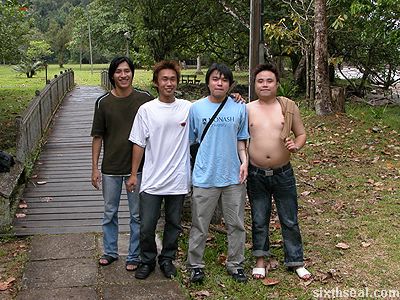 This is us at Bako National Park. Monash University should pay me for all this product placement. 😉 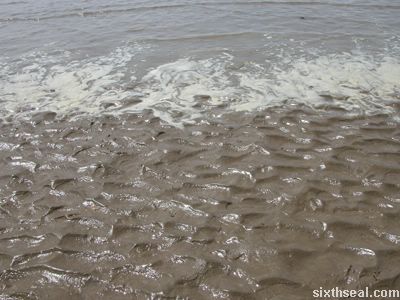 Everyone has to walk through knee deep sea water to reach the boats
coz low tide recedes the water level to beyond the jetty. We got on the
speedboat and it was back to Kuching we went… 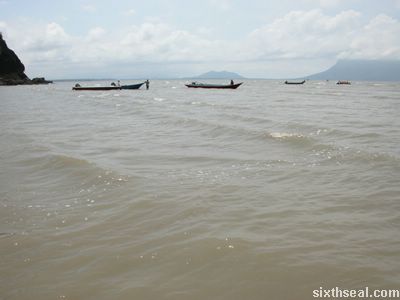