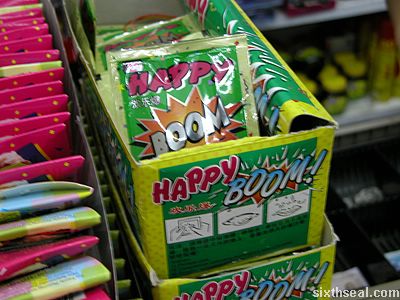 Happy Boom. Do you remember the packets that you squeeze and it
explodes when you throw it away? I finally found them! I’ve been
looking for this for ages, I’ve only seen it during my primary school
days and now I’ve found it at a grocery shop in Tabuan Jaya. Basically,
what you do is give these packets a bit of a squeeze, throw it away,
and it expands and explodes. 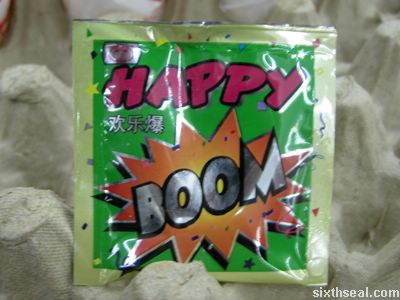 The Happy Boom packs go for RM 0.40 each. I got a couple to play
with. I had to take the photos in the egg containers in the shop coz
the lighting goes better this way. 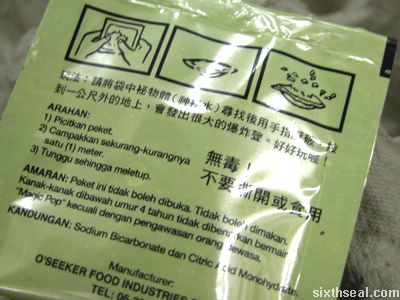 This is the back of the package. It contains Sodium Bicarbonate and
Citric Acid Monohydrate. I prepped my digicam, gave it a bit of a
squeeze and got ready to take pictures. 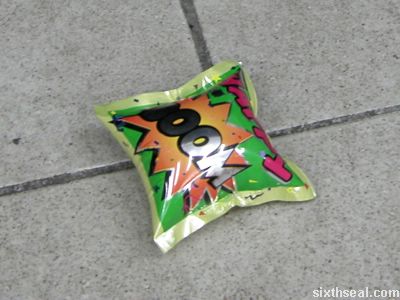 This is the Happy Boom expanding. Once you squeeze the packet,
friction combines the two components (shown later) together and it
starts to expand. It will explode soon after that, leaving no visible
remnant. 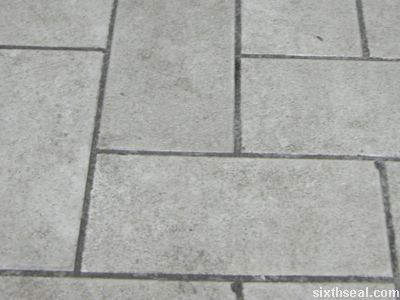 We were too close the first time and when it exploded, it got three
of us, except Ah Boon. The discharge was not unpleasant, just a quick
wipe and everything’s fine. It got on the digicam lenses too, but I
keep camera wipes in there (amongst other things *cough*) so that’s no
problem. 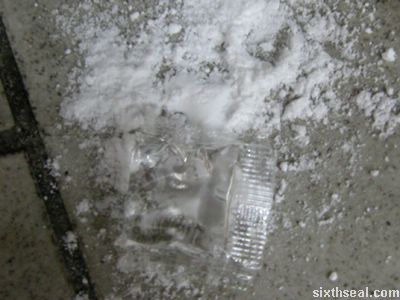 The back of the packaging says “Peket ini tidak boleh dibuka” (This
packet cannot be opened) which basically has the effect of telling me
to open the packet, and so I opened one up to see what’s inside. This
is what it contains – a small packet of sealed liquid, which I presume
is the citric acid and some powder, which I presume is sodium
bicarbonate. 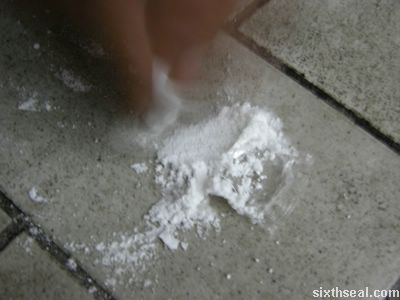 I broke open the liquid pack, and the liquid seems cool, it’s no
industrial grade acid, obviously, so don’t worry about it. One of my
friends mixed the powder into the water while I snapped a photo: 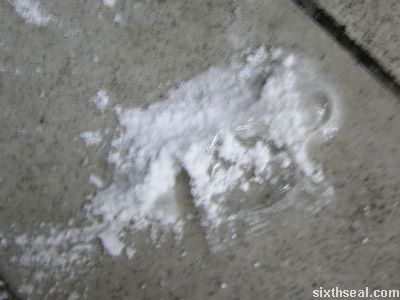 This is what the reaction would be outside an enclosed package – it
just bubbles and froths. I imagine Happy Boom works by making the
package expand with the gases made by the reaction between the two
chemicals to the stress limit, which makes it explode.

Thus, I’ve compiled the events of last night. Miriam and Ah Ann came
over. We watched Ju On (the first one) for a while. I generously
self-medicated with benzodiazepines, alcohol and *cough*. We went out
to meet Ah Boon. Then this Happy Boom experiment happened. After that,
we went to eat. I overestimated my stomach capacity and ended up
throwing up. Whoa, like, everything is clear now. 😉 All hail digicams
for memory retrieval!