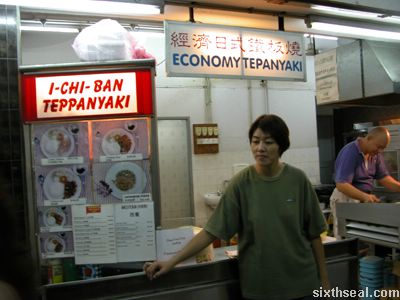 There is this wonderful Japanese Pizza available at either I-Chi-Ban
Teppanyaki or Economy Tepanyaki (depending on which sign you look at)
at Tabuan Jaya. I had this last night as well, and this eating
establishment scene preceded the teh c peng post chronologically. 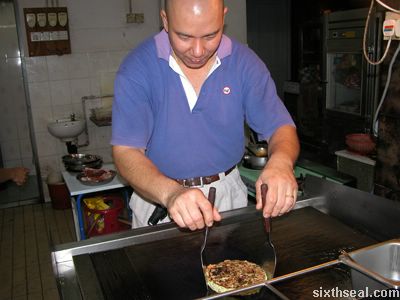 This is the proprietor preparing my Japanese Pizza. Watch him shape the pizza into, er…a pizza. 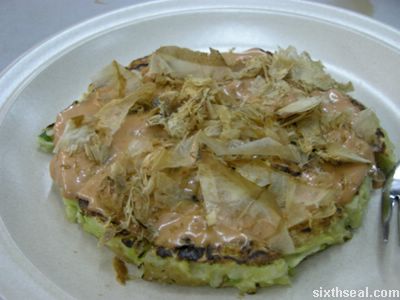 Now this, my friends, is the Japanese Pizza. It looks and tastes
wonderful. Those brown flaky things on top are cuttlefish! There is a
layer of pork floss between the topping and the pancake. Lovely! The
sauce is a mayonnaise – Thousand Island fusion topping, which goes
really well with the ingredients. There are some brown onion skins
which adds to the taste too. 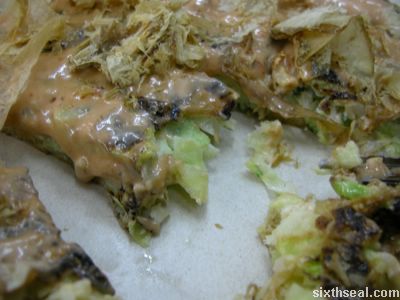 Here’s a closer look at the pancake. This is the interior, which
shows raw onions, meat and some other stuff. It’s not authentic
Japanese cruisine, obviously, but this goes for RM 4, and the portion
is generous, which is a great bargain! 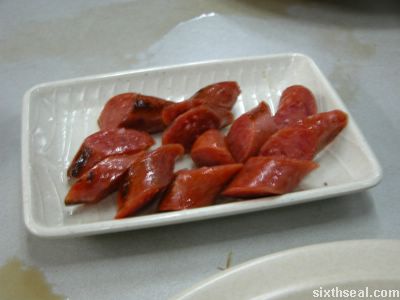 Ah Boon had a plate of chicken chop and this Taiwan sausage (shown
above) which I had as well. Ah Ann had some rice with beef and onions
and Miriam had the Japanese Pizza as well.

I will rewind the events of last night to the last post (which is
chronologically the second post after the initial post) in this series
which lead to me throwing up in the middle of the night in a dirty
longkang in Tabuan Jaya.