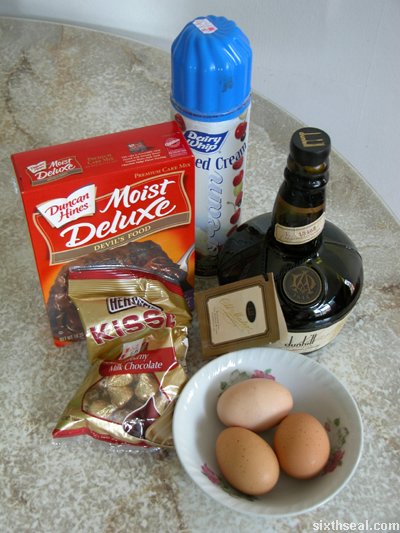 This afternoon was baking day at the sixthseal.com bakery. That, of
course, is just really my girlfriend’s kitchen – she has more baking
stuff than my kitchen does, coz my family doesn’t spend time doing
things like baking. We made a Devil’s food cake which I’ll like to call
The Devil’s Kiss. Yes, it was from a cake mix, but we customized it
(er…kinda), so there. :p

Recipe for The Devil’s Kiss: 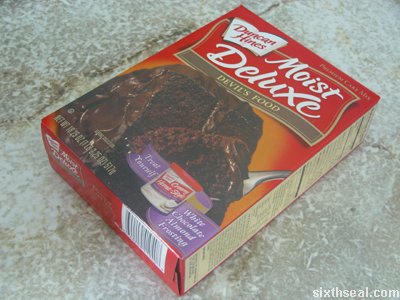 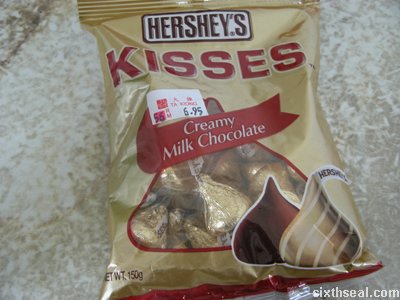 One pack of Hershey’s Kisses 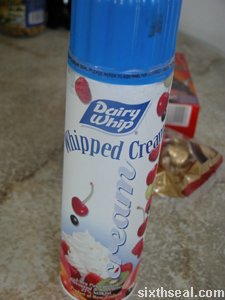 One can of Dairy Whip whipped cream 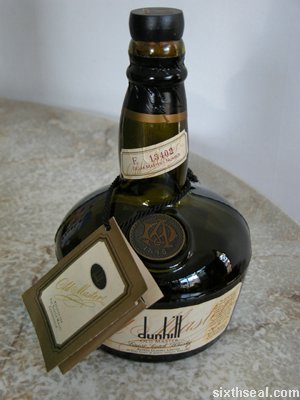 and the things that the cake mix requires, which wasn’t much – 3
eggs, 1 1/3 cups of water, and 1/2 cup of vegetable oil. Nothing you
would be hard pressed to find in any kitchen (even mine). 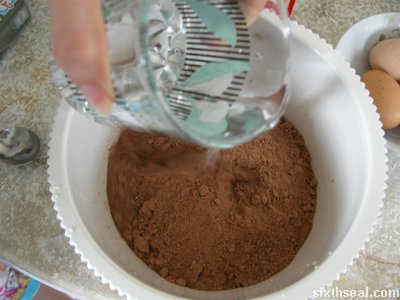 We started out by pouring the cake mix into the mixing bowl and
adding in 1 1/3 cups of water. I don’t know the exact empirical figures
for “cups” so we didn’t bother with conversion to SI units like litres,
and just poured in (literally) one full cup and another filled a third
up. 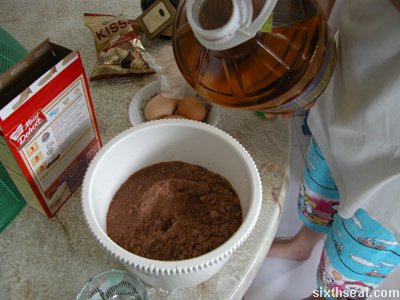 Next, we added in the vegetable oil. I was a bit doubtful when I
read this…a recipe that calls for cooking oil instead of butter for
cake seems kinda dodgy. However, that’s what it says on the package, so
that’s what it’s going to be. My girlfriend handled the huge cooking
oil bottle while I took a photo – we did not bother with cups because
that would mean more things to wash up after we’re done. 😉

It should be noted that more than 1/2 cup of vegetable oil was
poured in…the oil container is as unwieldy as it looks, and while I
sat on the frontlines to monitor the pourage (meaning, I sat on my ass
while I watched her pouring it), too much oil got into the mix. I was
going like “yeah, that looks about right, you can stop now, thanks” and
my gf was still going at and I was like “OMG, stop!” and she was still
going at it and when I finally put the digicam down and took the
cooking oil bottle away from her (it’s dangerous in her hands), I
guesstimated that more than one cup of oil landed into the mix. Oh
well… 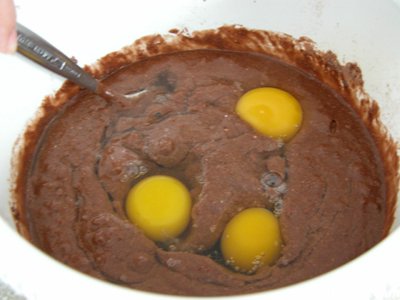 Anyway, three large eggs were cracked into the mix after that. It’s
noteworthy to say that all these preparations took a long time and we
did not follow the recipe religiously, and spent ample time doing other
stuff while the mix was lying there. I also added about 6 shots of
Dunhill scotch whisky into the mix. I was considering whether to go for
Chivas Regal or this one, and decided on this one, because it tastes
better than Chivas. 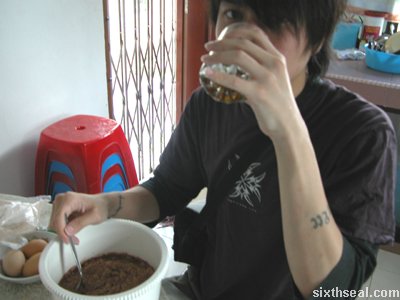 I also took the liberty of adding some whisky into myself at this
point. The recipe calls for 30 seconds of stirring, and I felt that
having a drink in my hand would make the task much more pleasurable. 😉
One does get sick of cheap alcohol, so this premium scotch is a very
welcome drink instead and makes the baking process much better. It goes
very well with clonazepam too, but don’t add that into the baking mix,
for Christ’s sake. 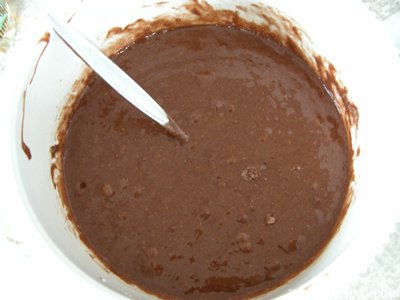 Thus, I stirred the mix for about 30 seconds (or until I was tired of stirring, didn’t know which came first, really). 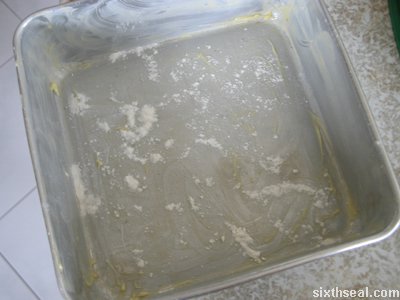 Now, we realized that we need to find an appropriate receptacle for
our cake mix, so we searched for one. The candidates were: a small
circular cake tin, a long bread mould tin and a square cake tin. We
chose the last one and used butter to grease the inside and finely
powdered it with flour as per the cake mix instructions. 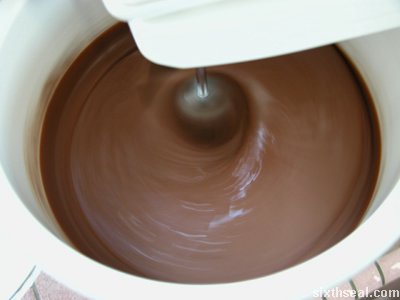 The cake mix, which now contains the original Devil’s food mix,
three large eggs, water, vegetable oil, and scotch whisky was processed
with one of them cake mixers for two minutes or so. The box said two
minutes anyway, we did not time ourselves, we just looked at the very
hypnotic swirls until we shook ourselves and realized that the cake mix
seems to be smooth. 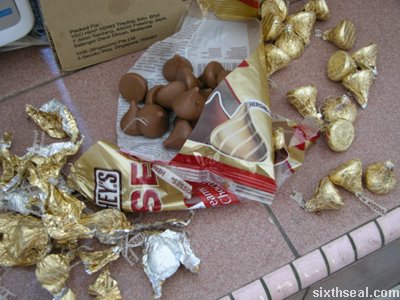 I then proceeded to prepare the Hershey’s Kisses by unwrapping it
from the foil and pulling out those damned liners. I like to call this
“unkissing the kisses”. 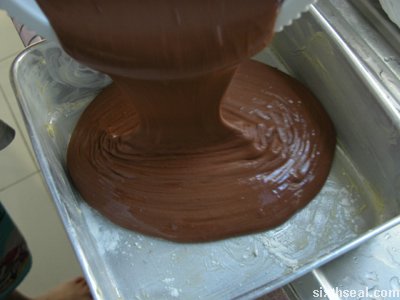 The cake mix was poured into the cake tin… 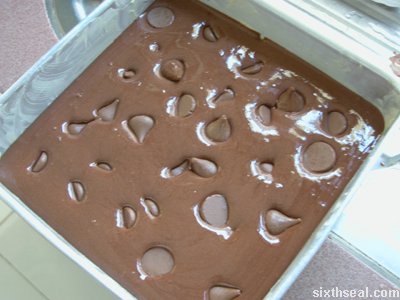 and Hershey’s Kisses were dropped into the mix at random spots. I
used up the whole packet, there is bound to be one in every square inch
of the cake. 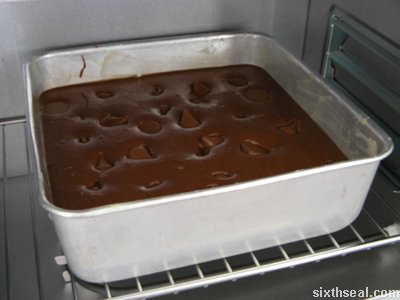 Finally, we realized that we have not pre-heated the oven and did
so. It should be noted that I did not want to do any calculations to
change Fahrenheit to Celsius so I let my girlfriend set the heat
settings to what “should be about right” for a cake. The cake mix is
finally inserted into the oven. 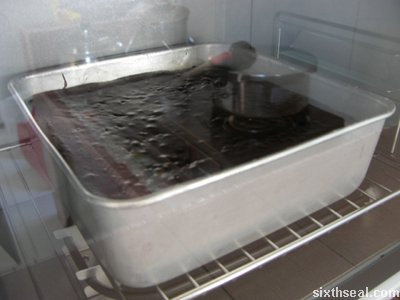 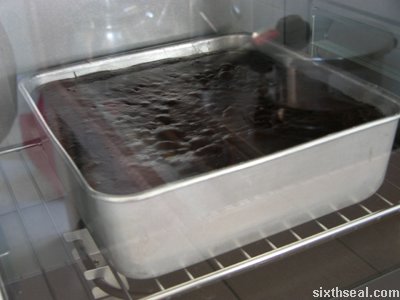 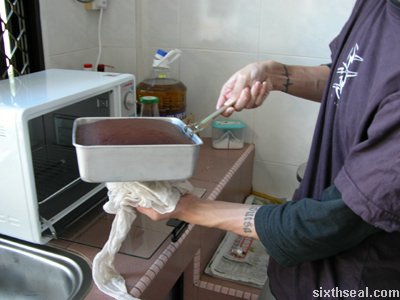 and I finally took the cake out of the oven with this nifty cake tin lifter when it looked right. 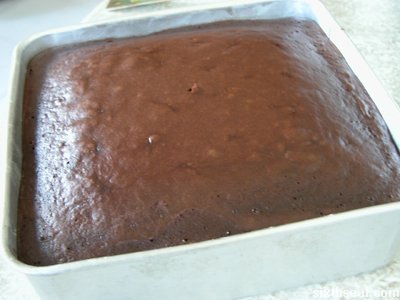 My girlfriend poked a hole in the middle with a toothpick and it came out moist, so back to the oven it was… 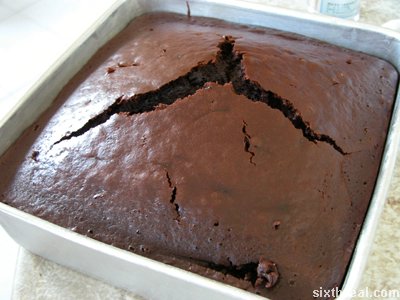 I present to you…the final product! We had waited for about 15
minutes and took the cake back out again. My gf then proceeded to poke several
holes across the cake while laughing hysterically. My
cake…sabotaged… :p Oh, by the way, the crack in the middle is
apparently the result of taking it out before it was fully done and
putting it back in again. The temperature differential shock tends to
make it go that way. 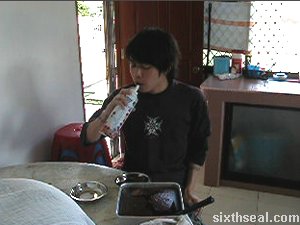 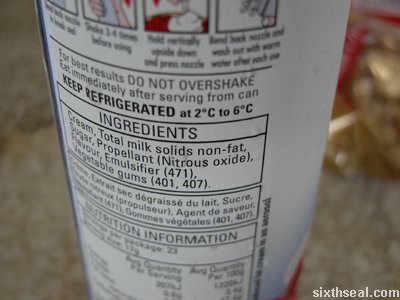 However, if you’re expecting to get recreational hits of nitrous off
a whipped cream bottle, you’re going to be very disappointed. It’s only
a small canister, and the dispensing system will produce whipped cream
no matter now tenderly you manipulate the nozzle to produce nitrous
oxide. You’re not going to get anywhere near recreational doses off
this, and it’s not for the lack of trying. I did, and the best I could
do was get a minute amount into my lungs and my exertions expended the
nitrous canister of the whipped cream container…which made it produce
sludge instead of whipped cream. Oops…my bad. I didn’t realize it had
such a small amount of nitrous in the bulb. Stick with nitrous
canisters and crackers and leave the whipped cream container alone. 😉 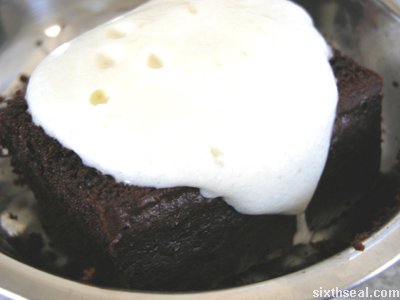 Here’s a shot of a slice of The Devil’s Kiss with some…er, cream
sludge. It tasted pretty good actually, but it was a little too rich (I
think it was the oil). I’ll tell you something interesting…it seems
that some of the Hershey’s Kisses were preserved intact in the final
cake! The scotch did not shine through though, probably due to the
overpowering chocolate taste. Nevertheless, it was a great experiment
and it yielded a rather tasty cake. 🙂