I saw more than a couple of people with digicams and video cameras
in Jolin’s concert tonight. I will pay you if you have photos or videos
of the guy in the red shirt who was on stage. Email me at jolin@sixthseal.com for arrangements. 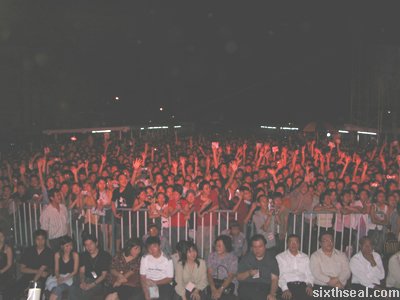 I’m asking coz I just went and all I got was this lousy photo of the
crowd before I was told digicams are not allowed on stage. I’m kicking
myself now for not making the first shot a close up of Jolin. I’ll
write a post in detail later, but basically I was on stage but an
organizer told me that digicams are not allowed on stage. I started to
argue with her, and then another organizer came over and I think he was
trying to gently “escort” a troublesome person off the stage so I
relinquished my photographic opportunity since I wanted to see Jolin up
close. 😉

I kindly asked the first organizer (who suggested to keep my digicam
for me until after the contest) to take a photo of me, but she said she
couldn’t do that. (insert sincere_apologies.jpg from images)

Thus, I don’t have photos of myself with Jolin Tsai. I will be
willing to pay someone who can offer me the photos in question. I am
the one in the red t-shirt.

Concert ticket: RM 10
Bribing the girl in front to give up her prime spot: RM 50
Getting up close and personal with Jolin Tsai: Priceless

There are some things in life Mastercard can’t buy…for everything else, there’s Ringgit Malaysia. 😉