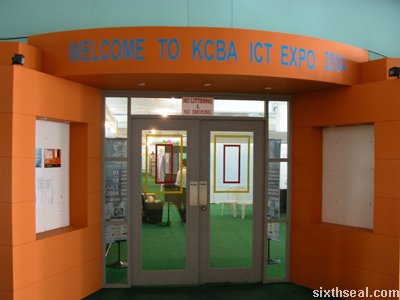 This is KCBA ICT Expo 2004 – the second expo we’re establishing a
presence in. KCBA is the acronym for Kuching Computer Business
Association and ICT apparently stands for Information, Communication,
Technology. It’s organized by the good people at IDA Exhibition
Services and it’s at Level 5 of the Permata Carpark Building. 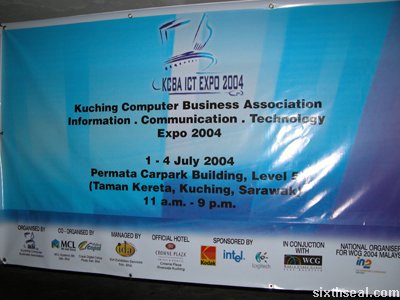 ICT Expo 2004 is more oriented towards entertainment and consumer
electronics, and is supposed to attract a younger crowd, compared to
the previous expo, which was mainly for suppliers and trade people. It
will officially open tomorrow, today is the day the exhibitors come in
and set things up. 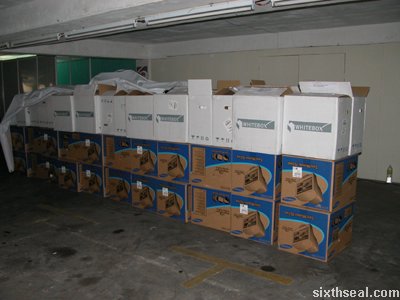 Anyway, the WCG (World Cyber Games) East Malaysia preliminary is
held at the same expo. That’s a pro gaming tourney, and I had half
thought about joining for fun, but they told me the spots were full and
the signups were closed five days ago. The above shows the boxes that
the games are going to be played on. 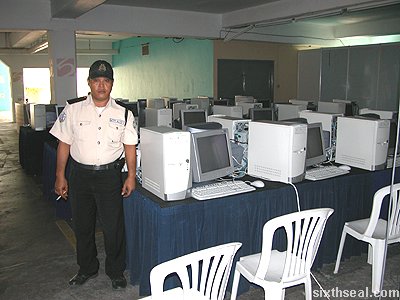 There was a security guard walking around, no doubt to prevent
competitors from installing aimbots or something. I got him to pose
beside the arena of PC’s and he kindly obliged. Cheers!

Here’s the customary video of the day: 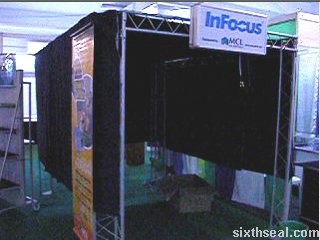 The reason for the long pause is coz I was checking my Exhibitor tag
to see what expo this is…you tend to lose track after a while. :p

Well, since today is the setup day (not open to the public), not all
the booths are finished yet, but from what I see, this is going to be a
more interesting expo. There were a lot of promising booths offering
intriguing products. 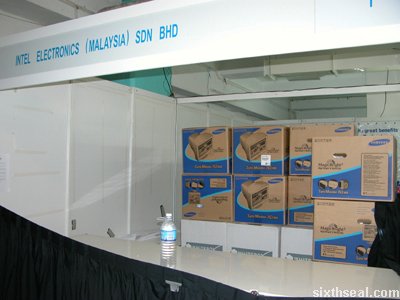 Intel is also renting a couple of booths at the expo. They have a
“Loot me!” sign attached to their booth. There’s no one there, in fact
the whole expo floor was practically empty. Monitors anyone? 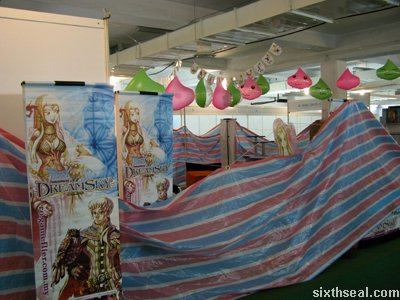 The booth to opposite us and a little to the left has Ragnarok Online – Dream Sky stuff. I’m not into MMORPGs… 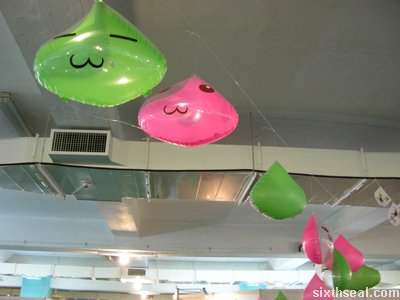 …but these balloons were going “Grab one, I’m cute!”

Here are some miscellaneous shots from the expo floor on setup day: 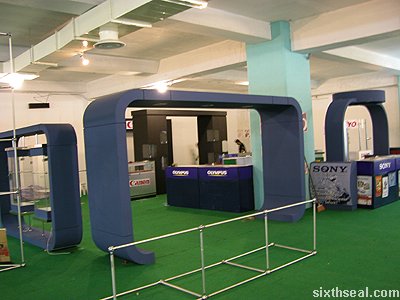 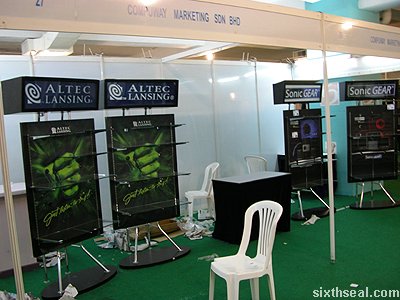 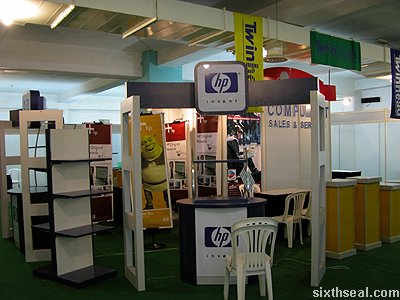 I’m intrigued by this device. 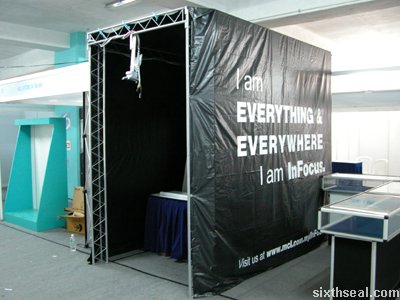 It goes “I am EVERYTHING & EVERYWHERE. I am InFocus.” I’m not
sure what it does, the dark walk in display doesn’t do anything, but it
could be one of those integrated home entertainment system things. I’ll
report back tomorrow. 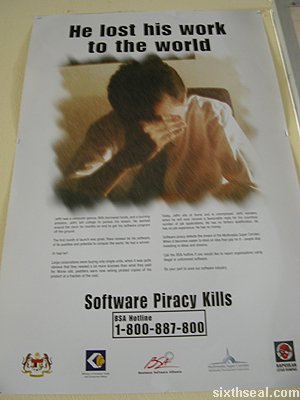 This poster really made my day. Anti-intellectual property theft
(the correct term for “software piracy”) propaganda. This is John, a
“computer genius” falling victim to “software pirates”. Poor John…a
minute of silence please, for John’s plight. 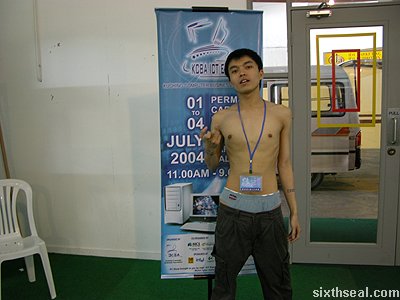 Men behaving badly. This illustrates the concept of “chao huey”
well, a local term which literally translates to “fire escaping”. It’s
one of the few things that survives cross-language translation. Chao huey
is the term people use to describe that aggressive and pissed off state
of mind following prolonged and high caffeine intake before benzos are
called in to temper (no pun intended) the negative effects. It can
manifest itself in various ways, namely, aggressive behavior towards
other people, a general simmering rage, and here, it shows a shirtless
someone giving you the finger with his pants falling down, showing his
tattered, but comfortable briefs.

When questioned, the man said that he’s feeling hot from all the
manual setting up work and wanted to go shirtless. I did not talk to
him much coz he was really agitated and confrontational.

Disclaimer: I made sure that there were no organizers
in the vicinity before taking that photo. There wasn’t anyone at the
empty expo grounds at that time except for us and this girl who was so
surprised she stopped in her tracks as I was posing for the photo. This
is just a fun photo taken by an employee and should not be taken to
reflect upon the company in any way. 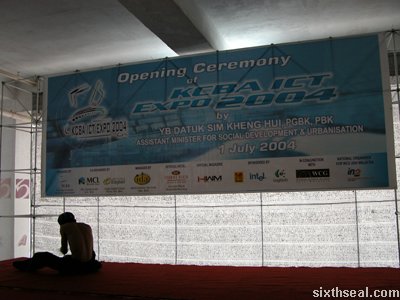 Anyway, we take turns having our lunch break…mine is up, I’m going back to the expo to set up the wireless LAN.