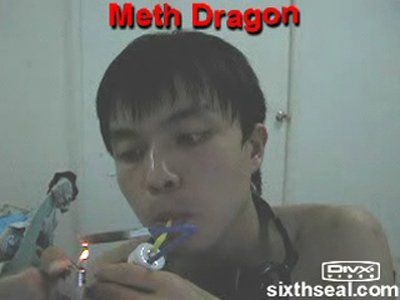 This video is the first one on sixthseal.com that has
post-production work done on it. The video shows veritas smoking
methamphetamine crystals (otherwise known as ice, shabu/syabu, batu
etc) from a make shift glass bottle design. I’ve been tinkering with
video editing software and this is the end result:

You will need the DivX 5.2 codec to play the video, older versions
causes a couple of quirks. Please tell me if you have any problems with
the video.

The original .MOV file was converted to DivX using the DivX 5.2
codec before minor post production work was done on it. The changes
made to the original video are documented below:

1. Gamma (brightness) adjustment. The video is actually BRIGHT for a change!
2. Nifty fade in, fade out “sixthseal.com” text at the lower right corner.
3. Scrambled “Meth Dragon” title dropping down in the intro.
4. Audio track replaced several seconds into the video by one of my favorite tweaking anthems.

It’s amateur stuff, but I had a lot of fun doing it, and it made a cleaner video.

Credit goes to crystalcallas
[bluelight.nu] for inspiring this video from the photos with her
exhaling impressively solid plumes of methamphetamine smoke. I remember
something about “dragon” being a local slang for tweakers there due to
the amount of smoke they exhale. 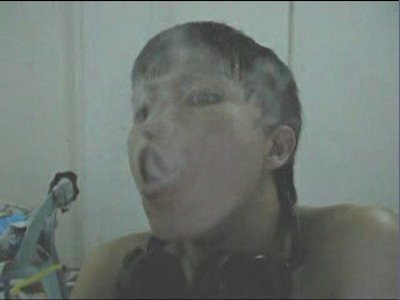 She hails from Spun-derland, my friend and neighbor from the east.
She has probably accidentally dropped more meth crystals than most of
you have ever smoked. Legendary. Oh, and yes, that’s what I’m going to
call the place now, since God has blessed it with flowing rivers
of…wait, that doesn’t sound right. Sand dunes, then. Sand dunes of
methamphetamine.

Anyway, before any tweakers catch me on technicalities, let me
explain…there are several factors to consider while watching the
video, namely:

#1 I was pretty fucked up at this point
I usually do a high payload IV and then start smoking continuously.
This is take number god-knows-what. Excuse me for not caring whether I
burn my meth or waste it.

#2 I am not known for my patience
I’m well aware that applying a small flame indirectly will result in
maximum yield and minimal wastage, and that’s what I usually do…when
I’m about to run out. “Waste not, want not” is lost on me.
Though I must admit, I’ve been known to crawl the floor for shiny bits
of stuff that looks like meth crystals when I’m out. Hey, you wanted to
know…

#3 It’s shot for a video
That means aesthetics
takes precedence. It should be stated that my digicam is only capable
of recording 60 second video clips, so I had to somehow squeeze in two
inhales in that time slot. So yes, I didn’t care if the flame got too
close or if I wasted a lot of meth, it’s art, mate. 😉 I was going for
maximum volume of smoke, so direct heat is applied with minimal
rotation. Oh, and I had to pre-heat the meth before I started filming
too. 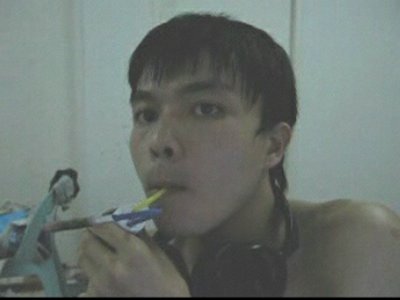 Disclaimer: The author wishes to make it known that
an insidious computer virus keeps on replacing the string “harmless
sugar crystals” with “methamphetamine crystals”. My apologies for any
misunderstanding stemming from the automatic parsing activity. No
illicit drugs were consumed at any point, and the author does not
possess anything illegal.

P/S – I know posting this up will catch me a lot of grief, and you
may wonder why I do it anyway. The answer is quite simple actually – my
mom dropped me on the head when I was a baby. 😉