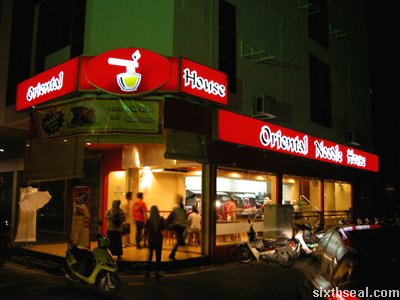 Oriental Noodle House is located in Jalan Satok. The name is quite
confusing because it’s staffed by non-Chinese and it seems to attract a
similar clientele. Despite our puzzlement, we decided to patronize the
outlet and check out their menu offerings. 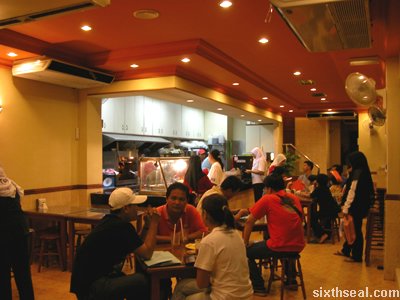 It appears to be a self-service establishment from the interior, but
we were handed menus and had our order taken. I had two noodle dishes
(it’s called Oriental Noodle House after all) and went for a drink called Nestomalt (RM 2.50). 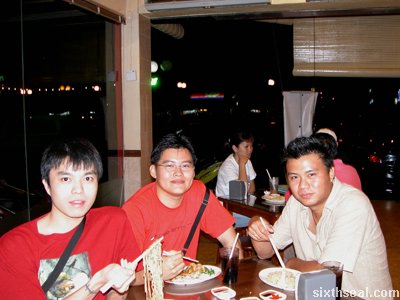 L-R: Huai Bin (me), Daniel, Johnny
This is a photo of the three of us – Daniel is my high school friend
who dropped by Kuching for a short visit and Johnny is also from my
high school and he’s working here. 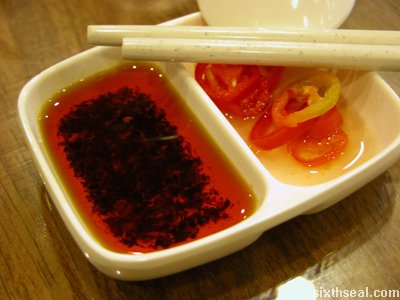 Here’s a photo of the standard sauce the establishment provides. The
left side contains chilli oil, the kind which comprises of an oil layer
with chilli pieces on the bottom, and sliced chilli in vinegar on the
left. It goes very well with both the noodles I had. Unlike the
emasculated sliced chilli most establishments serve, this one still has
its balls (well, seeds anyway) intact and retains the spiciness. 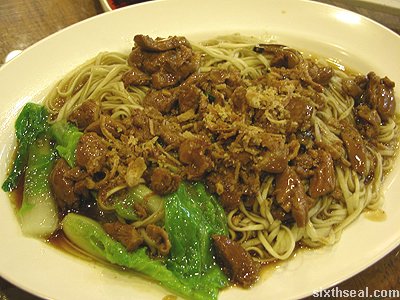 This is Chicken and Mushroom Noodles (RM 4.50). It was served piping
hot with a delicious flavor base with chicken and mushroom flavors. The
noodles tossed well with the sauce and it was soft and pliable enough
to slurp, just like the way God meant noodles to be eaten. 😉 This dish
has a nice home cook essence to it and is served with a generous
portion of chicken and vegetables. Not much mushrooms to be seen
though. Perhaps they’re on strike. 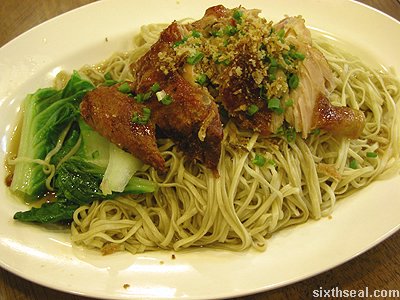 The second dish I had was the Roast Chicken Noodles (RM 4.50). This
one is drier than the previous dish, and it tasted quite different, but
in a good way. The roast chicken portion was generous and came from a
cut I like – the thigh. The noodles had a basic flavor, but it went
well with the strong tasting roasted chicken. It also came with some
vegetables and great grinded meat, and the final presentation was
dusted with fried onions and fresh spring onions. Delicious… 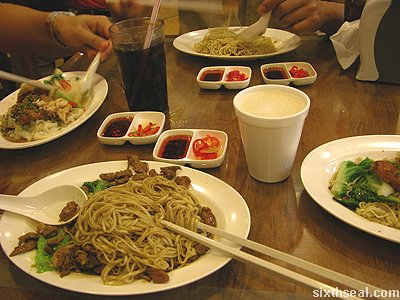 Nestomalt, which I strongly suspect came from a 3 in 1 sachet (just
add boiling water), is the Styrofoam cup you see on the table.