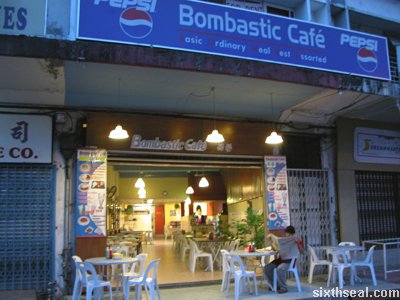 Bombastic Cafe is the…er, bombastically named cafe where one of my
coworker’s girlfriend works. It turns out that one of my friends has
also worked there before. I went there for dinner with a couple of
friends to check it out, coz I heard they have really interesting
drinks. 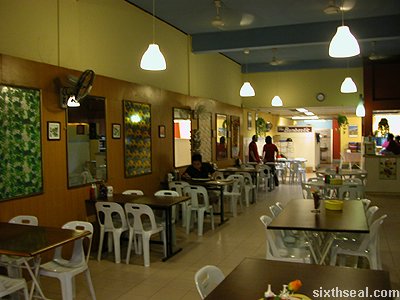 The interior of the cafe is nicely decorated, with very trippy
visuals adorning the walls. It got me wondering whether the mushrooms
in the rice I ate for lunch were the magical kind. 😉 The proprietor is
a nice guy too, talked to him and introduced myself, for no particular
reason, just coz I felt like doing it. 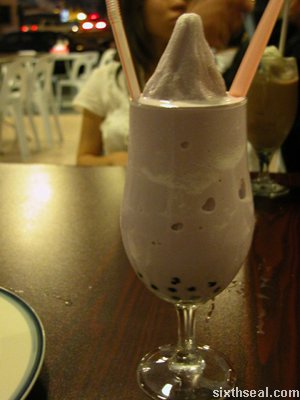 This is what I ordered – Rome Holiday. It’s a yam based drink with
pearl balls (is that what you call those? Taro.) which is ice blended.
Very nice. My friends had the other interestingly named drinks like
Gone With the Wind and Winter Sonata. 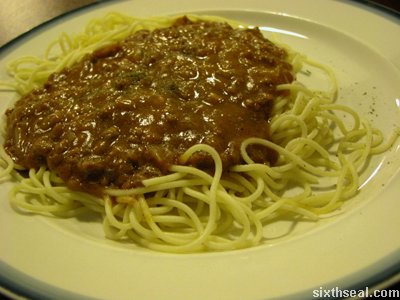 I had two main courses – I wanted to try both of their flagship
mains. This is The Bomba Spaghetti. I like the dusting of parsley on
the side, it makes it look nice. The sauce was meaty and tastes great,
and one of my friends who ate some from mine concurred. She had a mixed
plate of some sort, which I forgot the name of, but it was nice too. 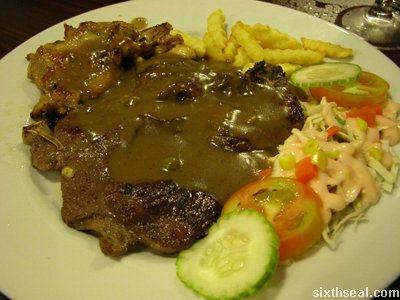 This is the second main I had – The Bomba Chicken. It doesn’t look
like chicken, it looks a little like lamb, but it tasted like chicken.
It was breaded and deep fried and complemented with a great sauce,
fries, coleslaw and other veggies. I found it delicious. I finished
both plates and then some, but that’s normal for me, I usually eat
double portions.

I would heartily recommend their flagship dishes, it’s really good.