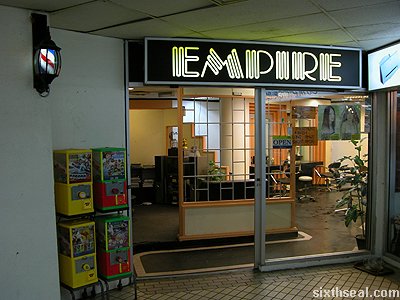 Empire is one of the many hairstylists (a pretentious word for
barber ;)) located at Wisma Saberkas. The shop’s logo looks like Empire
Records, but I sincerely doubt that this is one of their efforts in
diversification. 😉 I love the tiny little red blue swirling thing that
indicates a barber shop in the old days mounted to the side. 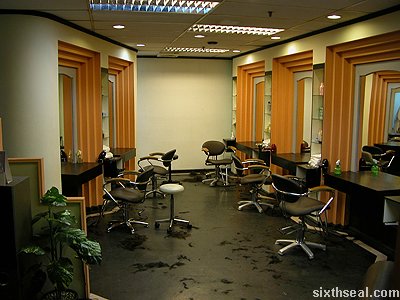 The place is surprisingly empty for a Sunday afternoon. It’s staffed
by four female and two male hairstylists – all of them aesthetically
pleasing. 😉 I would highly recommend this place if you’re into that. I
was offered a shampoo and hair wash service by my hairstylist, Su Fang,
which I declined. I was strapped for time, didn’t want to waste my time
cutting my hair. 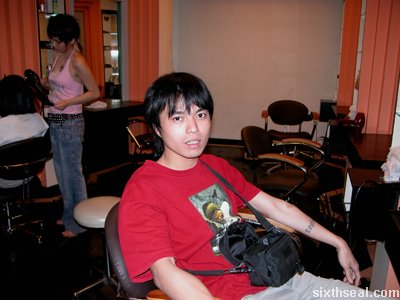 This is the ubiquitous “Before” shot. Quit the junkie jokes everyone
– it’s just a bad shot, alright. :p The quick flash was on, makes me
look washed out and all that. My hairstylist asked me about my age, and
she got it way off…I really look young for my age; or so it seems.
Heck, I’m even older than her. 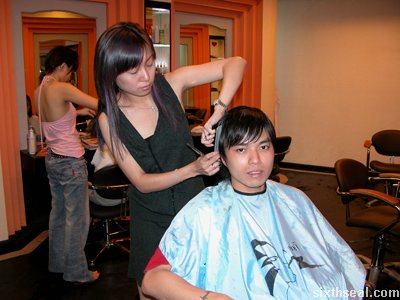 This is my hairstylist working on me. I don’t usually look like that
in real life, the quick flash washes out the details that’s all and I
was a little sedated during the haircut. 😉 Okay, I admit, I was kinda
nodding off at that time. It’s a little obvious. Hey, it’s Sunday;
don’t I have a right to relax a little? :p 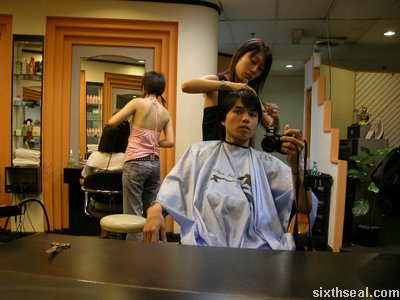 Here’s a photo taken through the mirror – I just asked for it to be
cropped short. Su Fang (my hairstylist) told me that it’ll make me look
like a school boy, and I said, that’s the image I want to cultivate.
The little innocent school boy “I didn’t do it”/”It wasn’t me” look and
all that. 😉 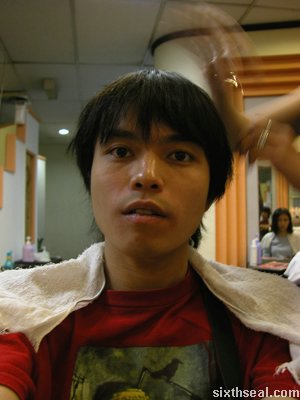 Su Fang was good enough to compensate for my loi. I don’t
know what it’s called in English, you know that swirl that you have at
the top of the head? Yeah, some people have two (they’re supposed to be
evil ;)). My second one is to the upper right forehead, and she left
the hair a little longer there, coz I told her I don’t comb my hair. 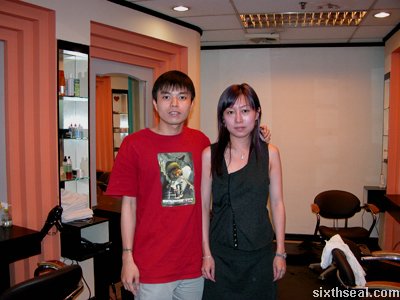 This is the finished “After” shot – it’s croppeds shot on all sides.
That’s my hairstylist beside me, her name is Su Fang. Empire is a great
place for a haircut, and the prices are reasonable too – RM 16 for mine.

w00t, I look like an innocent school boy again. 😉

0 thoughts on “Empire – my new haircut”