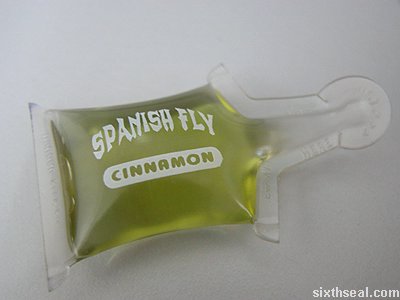 This is a cinnamon flavoured pillow of the infamous Spanish fly,
which is supposedly an aphrodisiac that will send people into throes of
orgasmic pleasure. Authentic Spanish fly preparations contains cantharides (also known as cantarides, which is made from the crushed wings of the Cantharis vesicatoria beetle, otherwise known as the Spanish fly. 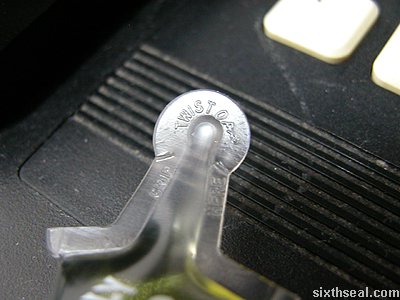 I bought a “pillow” (twist off pack) of this for RM 25 and the
proprietor told me that it’ll “make the girl feel hot all over”. I told
him I intended to consume this myself, in my never ending quest for
experience of potentially recreational substances. 😉 Well, he told me
I’ll basically feel the same effects, but I did a bit of research
beforehand to see what it actually is.

Spanish fly is supposed to “work” as an aphrodisiac by irritating
the urogenital tract, which would simulate arousal. This is where the
legendary aphrodisiac properties comes from – cantharides is used in
breeding farm animals by making them “feel” like they’re sexually
stimulated due to the irritation of the genitals. 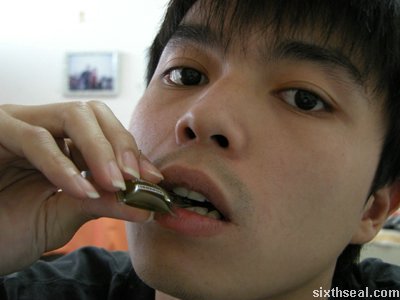 I decided to experiment with this substance and twisted open the top
and consumed the thick syrup consistency Spanish Fly liquid. It tasted
sickly sweet, but it’s not that bad and I emptied the whole pillow in a
swallow. Here’s the experience report: 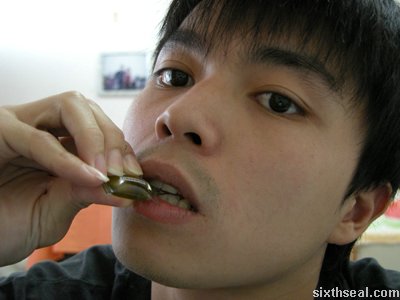 T+ 0:45 – I felt slightly “hot” at around T +0:45 but the feeling is
not “hot” as in sexually stimulated, but “hot” as in hyperthermia.
There seems to be some weak stimulant inside, probably caffeine or
ephedra.

T+ 1:30 – Facial flushing is present, as well as a general burning
sensation on the face. Still no evidence of the Spanish Fly working.

T+ 3:30 – I had forgotten that I took the Spanish Fly preparation until I took a piss. It felt slightly uncomfortable.

T+ 6:00 – I’m filing this under “Bunk”. There’s no evidence of
aphrodisiac action at all, but it does seem to have a little
cantharides in it. I just said it’s bunk coz I refute its supposed
aphrodisiac qualities.

This particular product does seems to have a little
cantharides (the active ingredient of Spanish Fly preparations) from
the qualitative itch, and a slight discomfort during the two times I
took a piss during the 6 hour period. Since this is an isolated
experiment, I cannot state whether this is a “reverse placebo” effect
or otherwise. There are no after effects on the second day (this
morning) except I do remember having a sleep erection (the ones you get
when you’re sleeping) that won’t go down. *cough*

However, I must make it clear that my experience with this particular “Spanish Fly” product leads me to state that it has no recreational potential
whatsoever. The initial mild “hot flushing” effect is quite enjoyable,
but you can emulate that with any old weak stimulant, like phentermine.

P/S – Beware priapism – it seems that this can cause it. :p