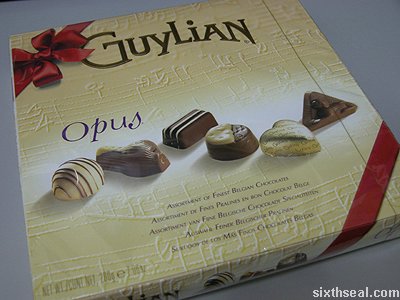 Guylian Opus is the Belgian chocolate manufacturer’s boxed set that
features six distinctive pieces named after the musical creations of
illustrious composers from the likes of Bach and Mozart. 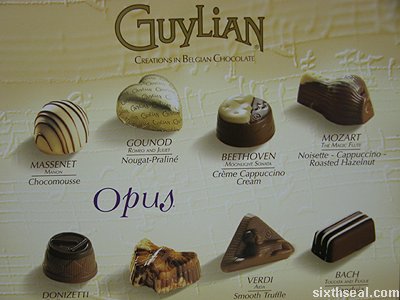 There are two sets of six different pieces of chocolate in the box,
mirrored and held in place in sunken receptacles. The box flips up to
reveal the composer and piece that each chocolate piece is dubbed and
what it contains. I found this unwrapped chocolate box in the pantry,
no one intends to eat it, so I did. 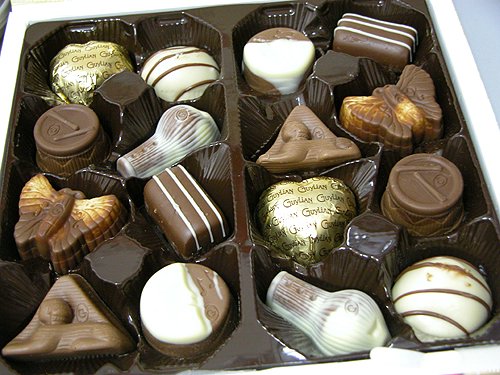 Mozart – The Magic Flute
Noisette – Cappuccino – Roasted Hazelnut
This is one of the more beautiful and intricately designed pieces. It’s
a burst of sweet chocolate followed by a surprise hazelnut slice
crunch, with a coffee aftertaste. This one is one of the gems.

Puccini – Madame Butterfly
Crème Orange Cream
The complex light-dark shade and butterfly piece is probably the most
aesthetically pleasing piece of chocolate. The filling is disappointing
though, but that can be attributed to my personal tastes. I don’t like
orange filled chocolates.

Bach – Toccata and Fugue
Gianduja
This piece is a simple chocolate block with stripes of white. I don’t know what gianduja is, but it tastes like Nutella to me.

Massenet – Manon
Chocomousse
This is one of the more disappointing offers in the Guylian Opus
series. The mousse is feathery and airy, but it’s not distinctive
enough to write home about. I won’t even consider sending a postcard.

Donizetti – The Daughter of the Regiment
Noisette – Praline – Roasted Hazelnut
It tastes like the Mozart chocolate, but there’s no hazelnut in this
one. The Guylian Opus box has two sets of each and I ate both…and
both are hazelnut-less (is there such a word?). Where my hazelnut?

Gounod – Romeo and Juliet
Nougat – Praline
This gold foil wrapped heart shape chocolate piece looks to be the
premier offering in the chocolate box set, as such wrapped pieces
usually are. It let me down…it’s just a soft nougat chocolate with no
distinctive notes.

Jesus, somebody please pass me an insulin shot…