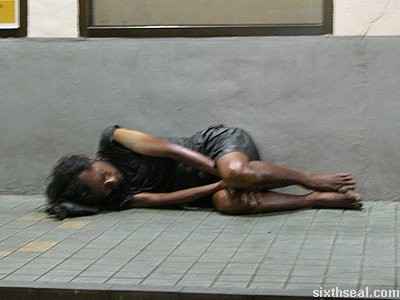 This is the Jalan Padungan resident crazy man (not a PC term), in a
more subdued situation. I’ve been wondering where he gets his sleep,
and my curiosity was finally satiated last night, when I saw him
sleeping on the sidewalk far away from his usual haunt. He was in India
Street when I caught him on my digicam.

He can be usually found wondering in an agitated manner in the
morning along Jalan Padungan. Every single day, without fail. He’s not
prone to violent behavior, though I’ve heard him shouting and mumbling
thoughts only coherant to himself while walking in his usual rapid
pace. Gotta love his dreadlocks though. 😉

Hey, I could probably be him, stalking along Jalan Padungan some
day. God knows I have enough psychological conditions to fill the
alphabet soup. 😉