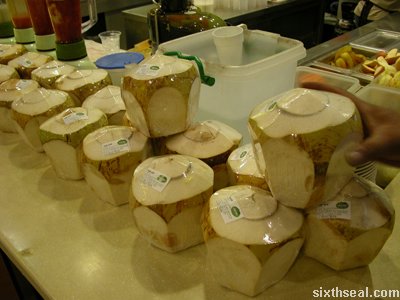 The Top Off coconut experience is commonly available in food
courts…it’s the shrink wrapped coconuts at the drinks counter with
the top partially serrated for easy opening. It’s a very user friendly
coconut. 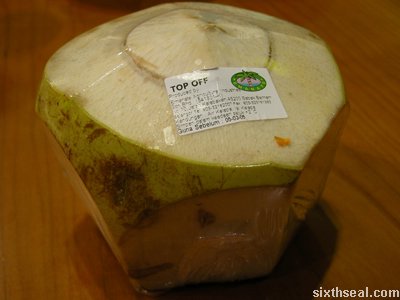 It comes in several varieties – a fully green one (skin on) which
tastes a little tart, a mostly skinned white one which has a sweeter
content, and the Thailand variety which is a small, fully skinned
coconut. I have had all of them, and my personal preference is the
partially skinned one. 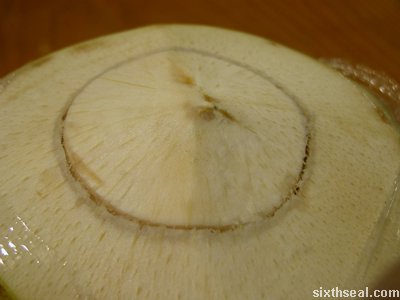 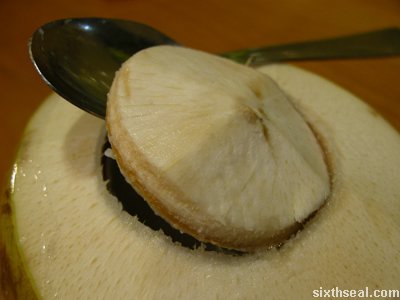 Next, you use the side of the provided standard spoon to remove the
“cover” of the coconut. The easy way to do this is to analyze the
partial factory cut top for the largest point of possible entry and
wedge the side of the spoon (the thin side) down, before using leverage
to “scoop” the whole top back up. 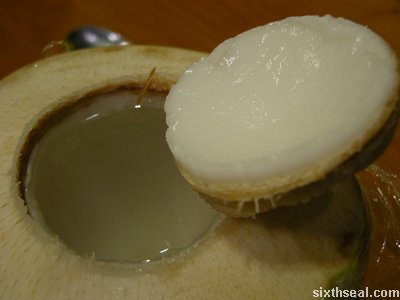 It should look like this after that step is completed. Do not, under
any circumstances, allow the top of the coconut to fall back into the
coconut. It should also be noted that this is the most difficult part
of the process, as there is a distinct possibility of causing a faux
pax by twisting too hard and spilling coconut juice all over the place. 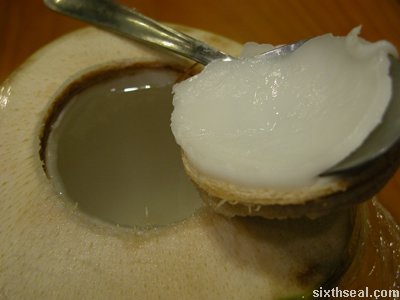 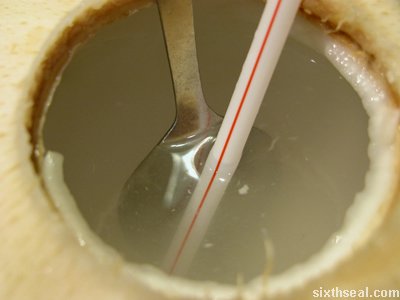 The next step is to insert the (provided) plastic straw into the
open coconut receptacle. The coconut juice can be sipped straight from
the coconut. Optionally, the spoon can be used to harvest more coconut
flesh from the inside of the coconut. It is important to remember that
the entire internal circumference of the coconut is coated with coconut
flesh…which is edible. 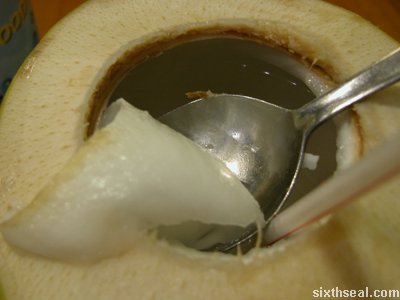 The coconut juice should appear as a clear liquid, unless the
coconut has been disturbed in any way (e.g. internal flesh scooped for
consumption, vigorous stirring etc). Do not be alarmed if the coconut
juice turns murky. This is perfectly normal and the coconut remains safe for consumption.
The color change is caused by cross contamination from the coconut
flesh, but this is not as bad as it sounds…since the flesh is edible.
Certain connoisseurs also appreciate murky coconut juice. I reiterate –
murky coconut water is perfectly fine. 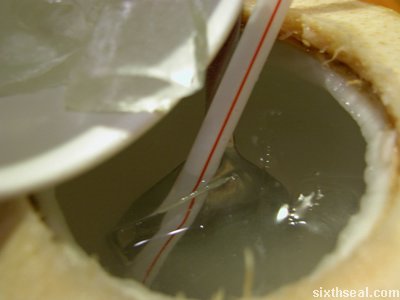 There is an option of adding ice to the coconut for a chilled
coconut drink. The user does this at the risk of diluting the coconut
juice. Coconut connoisseurs frown at this practice, but it is
widely…er, practiced for a colder drinking experience.

6 thoughts on “Guide to eating a Top Off coconut”