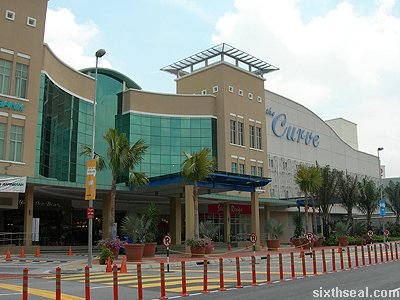 The Curve is the latest concept shopping mall that opened up in Mutiara Damansara, completing the Holy Trinity (IKEA-Ikano Power Center – 1 Utama – The Curve)
of consumerism. The Curve is located right opposite Ikano Power Center
and the architecture of the place is dominated by…well, curves, so to
speak. 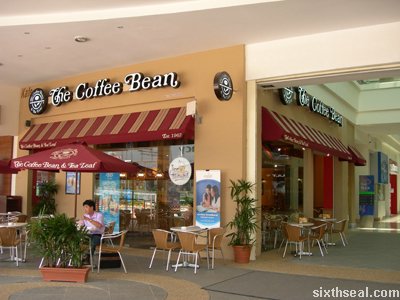 The anchor tenant at the main entrance of The Curve is The Coffee
Bean and Tea Leaf. Despite the prime real estate space, it seems that
this coffee chain does not attract as much patrons as the Medusa
figurehead located further in The Curve. Personally, I’m partial to
Starbucks too, so I didn’t linger here. 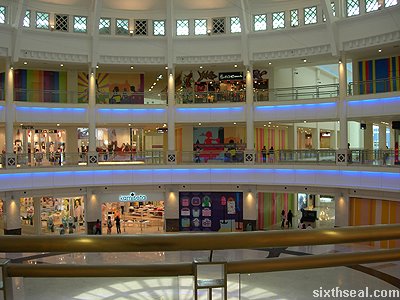 The Curve is being promoted as a different designer shopping center
and it just opened recently so I decided to spend an afternoon there to
check it out. Please don’t let this photo of the rounded interior fool
you – the tenancy rates at The Curve is still relatively low, which is
understandable, considering it’s new. 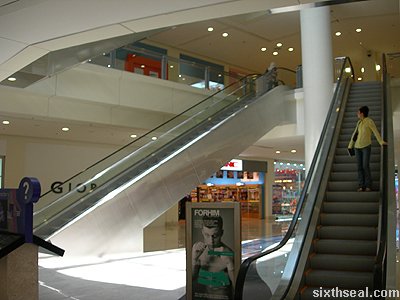 The escalators at The Curve are also subtly curved…I half expected
the toilets to be curved as well, but I can report with authority that
the washrooms at The Curve are perfectly conventional. The Curve
implements a very interesting concept of segregating the fashion
outlets from the eating establishments. The Fashion Mall covers the
interior of The Curve and The Street Mall twists and bends around the
exterior of the entire three storey shopping mall. 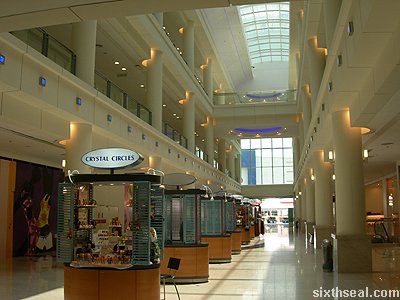 I found the architecture to be very novel and charming…each floor
is logically partitioned into two sections – The Walk and The Street.
It gave me the feeling that The Curve is half a shopping mall, albeit a
very artistically designed one. The Walk refers to the air-conditioned
interior of the mall and it leads out to The Terrace. 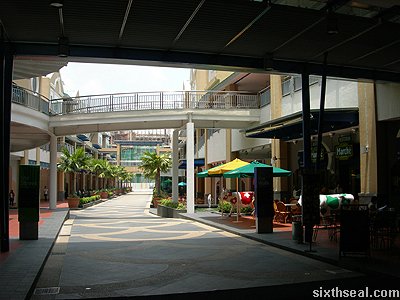 The Street takes up all the outdoor space around and inside the
mall. It’s an open aired path lined with shops. The right side of The
Street is dubbed the Western Courtyard, while the left flank is called
the Asian Courtyard. The Street is almost as big as The Walk and each
of the five floors follows the same The Street-The Walk partitioning,
including the two basement car parks. I’m just as confused as you are
regarding the architectural decisions and would in fact like to have
whatever he/she was taking when this concept mall was drawn up. 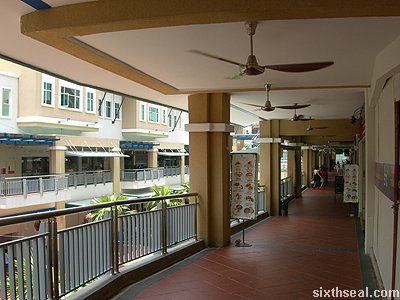 The Ground Floor, First Floor and Second Floor all leads out to The
Street at various points. It’s meant to be a mall that embraces the air
conditioned comfort of modern shopping malls on one side and an al
fresco open air retail space on the other half. It’s not as bad as it
sounds though; The Curve is just a three storey mall, so it would take
a lot of effort just to get lost. The balcony lining The Street is
densely packed with ceiling fans, which is a really good idea in our
climate. 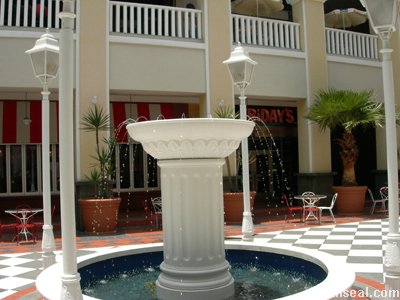 The Street leads to The Piazza at the end of the shopping mall and
the same segmented design is replicated across all the floors so it’s
actually pretty nice to walk around inside before stepping out to
stroll around in the fresh air. There are also several decorative
structures interspaced outside, like this water feature (a pretentious
name for a fountain) and gazebos. That’s a T.G.I. Fridays behind the
fountain. 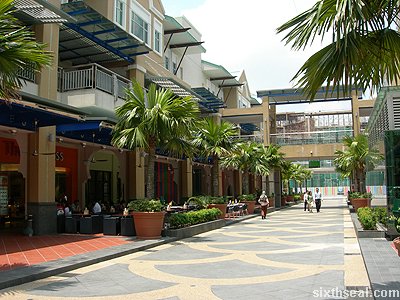 The palm tree lined street is a refreshing change from the usual
enclosed shopping centers around here. There are also transparent glass
walkways interconnecting the two courtyards at the upper floors of The
Street. I had lunch at the excellent The Bakery Moments (review
tomorrow) – a Norwegian bakery concept store that just opened its first
establishment here.

The Curve seems to have the potential to become a great specialty
mall like bsc in Bangsar. It’s small but cozy, and while it’s true that
The Curve can’t compete in size or secure mega anchor tenants unlike
the two massive neighboring shopping malls, it makes up for it with
quality specialty cafes, bistros and other eating establishments. I
like The Curve – it exudes a certain charm that large commercialized
shopping malls lack…