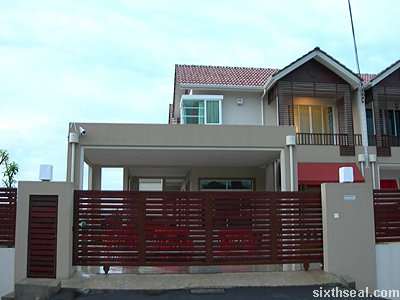 I went to Ainsley and his wife Michelle’s housewarming party at
their new place in CountryVale last night. It’s a residential area
located about 4 1/2 miles away from Kuching and the place is so
pristine, it’s amazing. They just moved into a large corner
semi-detached house and I received an invite to the housewarming (which
came with a much needed map ;)) with most of the Huygens Asia family at
their place, starting 7 pm. 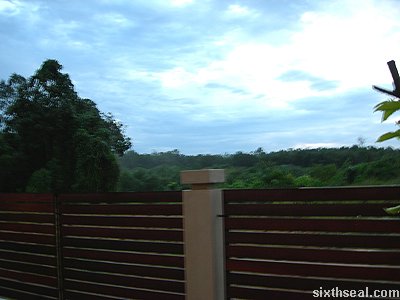 Ainsley (we work together) and Michelle managed to get a good plot
of land too – the view is full of dense foliage since there’s a jungle
located right beside their place. I went early with Kenny (another one
of my co-workers) and managed to see the view just before sunset.
There’s a shallow valley and miniature hills too – the place is serene. Lots of fresh air, good neighborhood, nice location – it’s a great place, Ainsley! 🙂 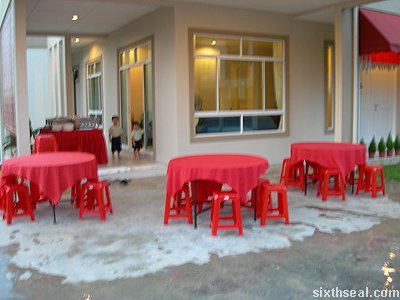 There were tables laid out on the front lawn for the guests – I
think we were the first to arrive, coz what we thought would be a 30
minute drive turned out to be much quicker, due to what I can only
attribute to Kenny’s excellent speed on the highway. I was
impressed…he drives with the same abandon that I do, except he
doesn’t get into…er, road mishaps, shall we say, as often as I
do….which is pretty often. Cars, trucks, defenseless old ladies, you
name it; I’ve accidentally mowed it down while driving. :p 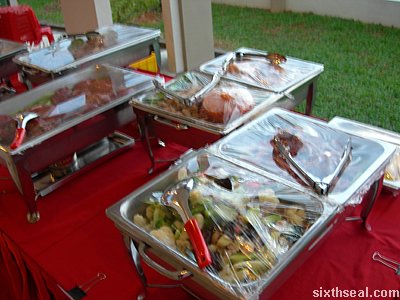 The food was prepared on another table and I managed to get a couple
of blurry shots of the fare…my apologies for the less than pristine
photos. Please forgive my Nikon 7900 – it indulged in various
benzodiazepines and had more than a couple of tokes from the peace pipe
before arriving, so several photos didn’t focus well. Myself, I went to
the housewarming party sober, I would never think to insult the hosts by attending a family friendly event without all my faculties intact. 😉 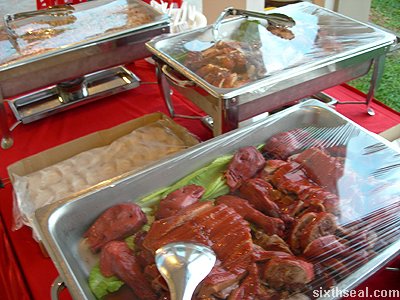 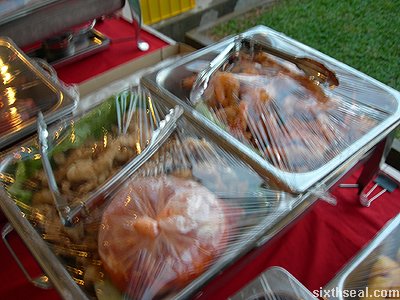 …it was enough to feed about 30 adults and children. I was starved
and I ate my fill, and so did most of the Huygens Asia family, and
there were still leftovers. It totally ruined my fantasy of eating
everything in sight during the munchies. 😉 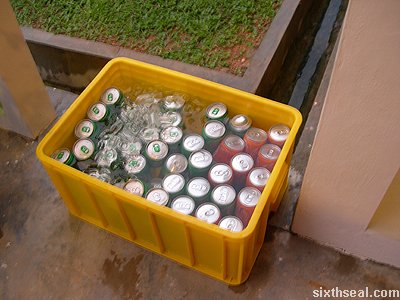 Lest we forget, there’s also a cooler filled with beer and soda at
the lawn. I did not know alcohol would be served, two thumbs up to
Ainsley for arranging that. 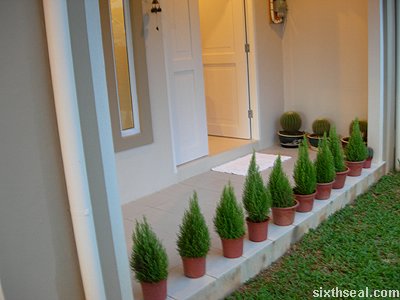 The front porch is lined with shrubs and huge cacti pots, which
leads to the front door. Everything is so clean and new, and I was
impressed that the place remained pristine despite the guests going
around. I don’t know how they do it… 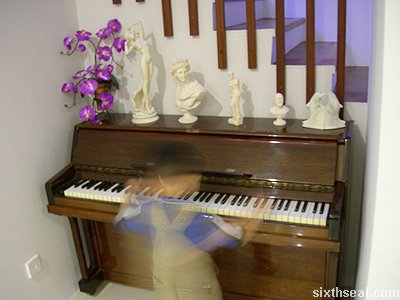 Ainsley was kind enough to give us a tour of his house – this is a
piano in a nook just off the first living room. There are two living
rooms…so I think this would be the guest living with the one at the
back designated as the family living room. I don’t know though, I only
have one living room and I’m sleeping in it. 😉 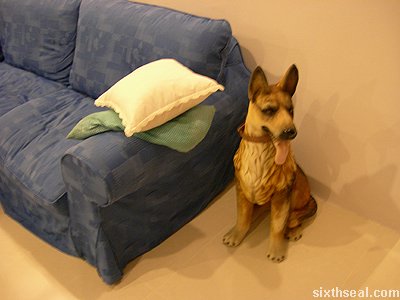 There is also a very realistic looking dog beside the futon (very
soft, the futon, not the dog). I thought it was real at first, that’s
the detail it had. It’s realistic enough to give home intruders reason
for pause, and if that doesn’t, the countless surveillance cameras
(some hidden) hooked up to DVR’s and video servers for remote
monitoring would. We are, after all, in the IP remote video
surveillance industry. 😉 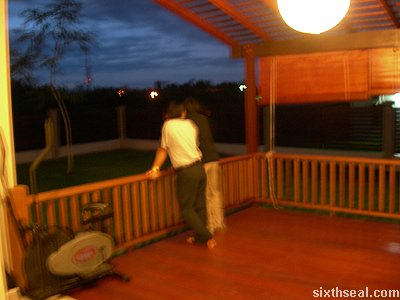 The back patio with transparent skylights would be an ideal place
for breakfast with the breeze and fresh air. It overlooks the backyard,
which is going to be installed with a fish pond. 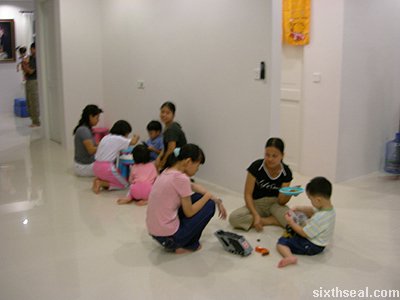 The family relaxation room was populated with children and their
guardians digging into the food, which gave me a new wave of the
munchies. There will be a projector screen TV installed here in the
future too. 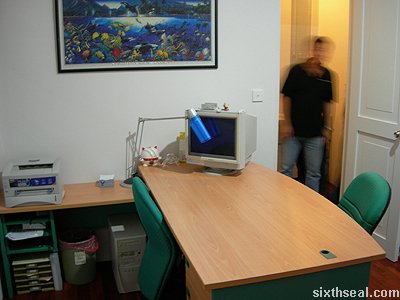 The upstairs rooms have all been fully furnished and include a
dedicated home office for Ainsley (shown above). There’s also a fully
equipped air conditioned entertainment room with a large TV and A/V
equipment in front of a sofa for his kids as well. Hey mom, how come we
never had one of them “entertainment rooms” when I was little? 😉 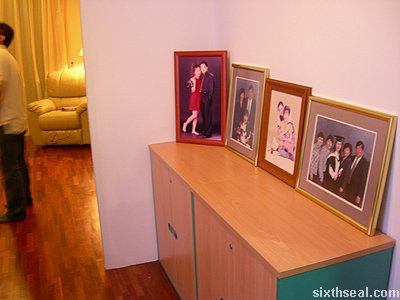 I passed by some of Ainsley and Michelle’s wedding (or was that engagement?) photos in the hallway… 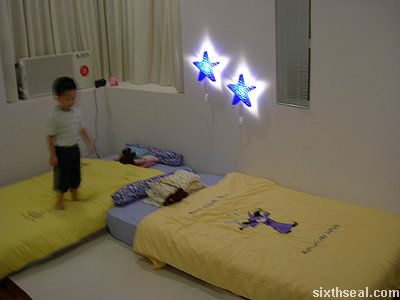 …which leads to their children’s bedroom. The starfish light decor
is very trippy – it flashes and pulses with different light
intensities, looks like a perfect trip toy. 😉 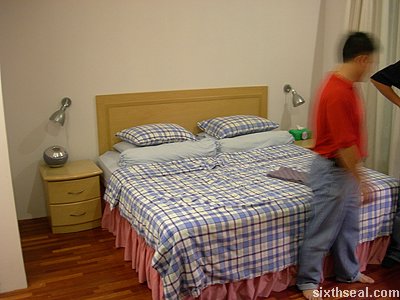 Here we have the master bedroom…it will be a one phrase
description since I feel like I’m violating their privacy already. :p
However, there’s a very interesting contraption beside the bed… 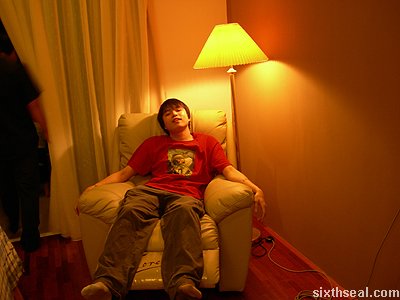 …a Lorenzo chair! I felt totally at home chilling out in this
Lorenzo chair…I need to get myself one of these – it’s perfect for
reclining in, with its contoured curves and padded sides. I mean, just
look at me! I’m totally chilling out here…in fact, I’m so relaxed,
I’ve let Cali surfer dude speak invade my language syntax! 😉 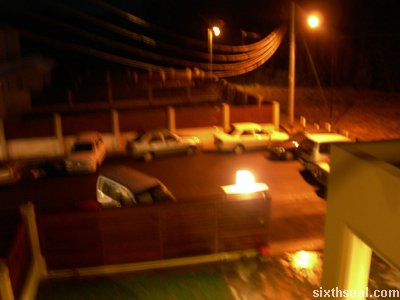 The rest of the invited guests decided to grace us with their
presence at this point, so we adjourned downstairs to get something to
eat… 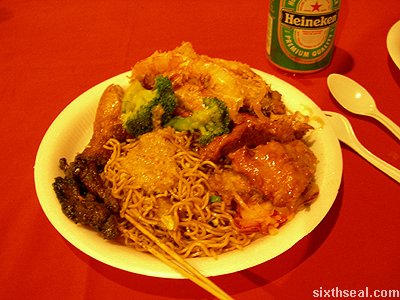 I think I had three or four rounds of food… 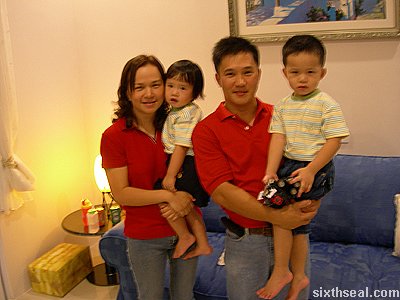 Props to Ainsley and Michelle for being gracious hosts! Thanks for having us! 🙂