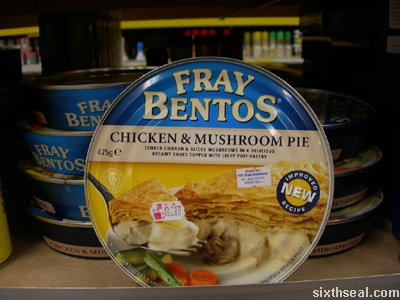 I thought I’ve seen everything, but I chanced across a Chicken & Mushroom pie in a flat can
on the shelves of the supermarket (!). It’s by Fray Bentos and the
product is called Chicken & Mushroom Pie. It retails for RM 16.80
and it’s made in England. 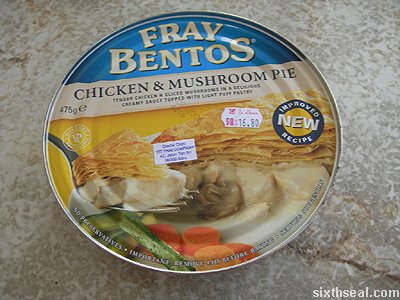 The can describes the Chicken & Mushroom pie as having a “New
Improved Recipe” and “Light Puff Pastry”. It’s supposed to contain
“Tender chicken & sliced mushrooms in a delicious creamy sauce
topped with light puff pastry”. I am doubtful that something that came
out of a tin will possess those qualities, but I decided to try it out
anyway. 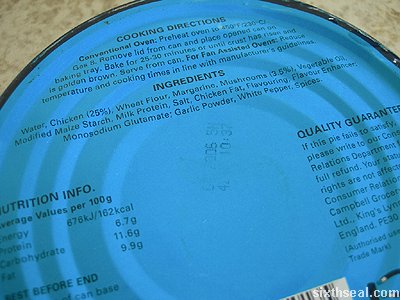 The instructions for the Fray Bentos Chicken & Mushroom Pie (in
a can) is pretty straightforward – just open the lid and chuck it into
an oven for about 20 minutes or so. It’s just like a microwave dinner.
😉 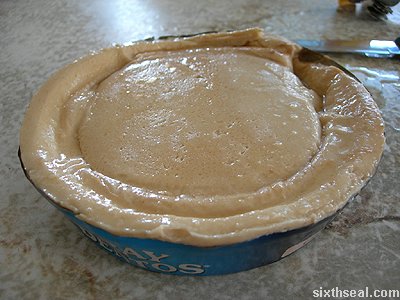 Unfortunately, opening up the can proved to be a bit of a
challenge…it took two different can openers, a knife and three cuts
(on me) before the can could be pried open. The pie looks interesting
once I managed to get the lid off though – it’s like a soggy mess. It
looks like Spam, even. 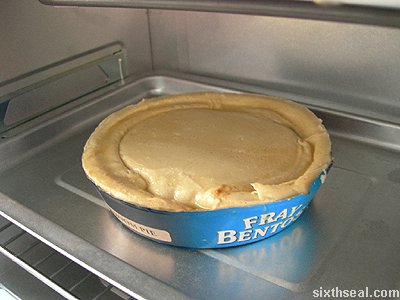 I was interested to see how this would turn into a Chicken and
Mushroom Pie, so the oven was preheated to about 180 degrees Celsius
and the entire open can was put into the oven with the timer set for 25
minutes (it’s a fan assisted oven). 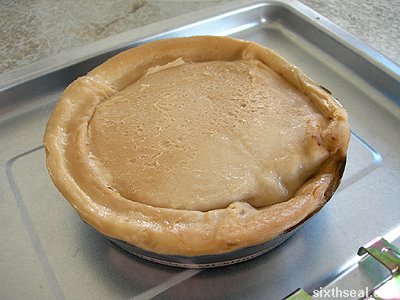 This is what it looks like after the 25 minutes were up. The crust
wasn’t “golden brown” yet and my girlfriend insisted that it’s not
done, but being the stubborn mule that I am, I insisted on eating a
couple of slices. 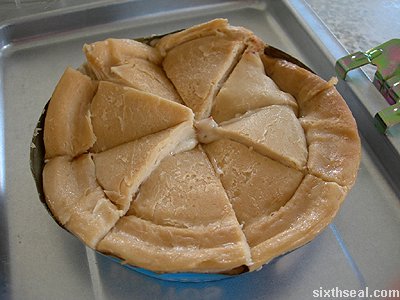 Thus, I took the Chicken and Mushroom Pie out of the oven and sliced it into 8 slices (like a pizza). 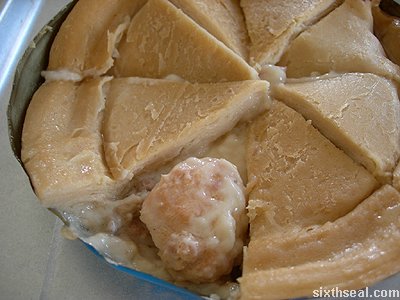 There are some generous chunks of chicken inside and the pie crust
was flaky, but just on the top layer. It’s sufficiently cooked IMHO,
and I ate two slices before putting it back into the oven for another
10 minutes (coz my gf won’t eat it in that state). 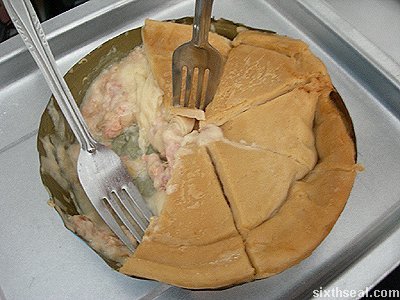 This is what it looks like after a total of 35 minutes in the oven.
What did it taste like? It tastes like a soggy reheated pie…out of a
can. :p

9 thoughts on “Fray Bentos Chicken & Mushroom Pie in a can”