The Adios Motherfucker (AMF) cocktail is a time honored (well, maybe
not, but saying “time honored” is as fun as saying “Adios,
Motherfucker”) one which usually is made up of:

I decided to go for something stronger and the bartender and Luconia
managed to cook up something even better. It’s a variation of the AMF
so I’m going to call it “Something wicked this way comes…” which
sounds pretty cool, but Cherie pointed out one major flaw in it:

Cherie: That’s a really long name, man. I can’t really say to a customer “Oh, do you want to try Something wicked this way comes”.

Anyway, this particular drink is made up of:

topped up with lager (beer) and Guinness Stout. It’s a bit stronger
than AMF due to the topping up with alcoholic drinks (beer and stout)
instead of non-alcoholic mixers (sour mix and 7-Up). 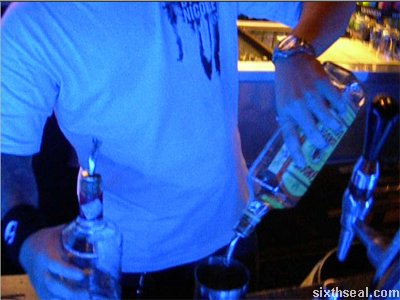 The drink ratio isn’t as important as the point of making a drink that will get you real drunk real fast. I had several Dormicum
tablets and STILL couldn’t sleep so I went and downed two of these
motherfuckers in one shot (it’s served in a Long Island tea glass) and
I basically got really fucked up. 😉

This thing is fucking toxic. It’s something wicked, alright…

Yeah, sixthseal.com is back and its as un-Malaysian as ever (albeit legally). 😉