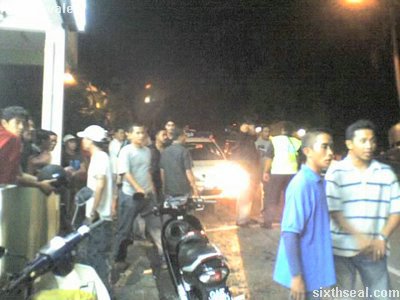 There was an incident involving a huge group of people which most people would have seen (another one of my co-workers was there too and no one knew what was going on) if you’re around the 7-11 outlet near Hilton in Kuching at around 2 – 3 AM last night (technically, this morning). It ended after several police patrol cars dispatched MP5 assault rifle armed officers to diffuse the public affray.

anyway we was out tonight, having ourselves a ball at a certain club in kuching when last calls came and we was left with nowhere to go. so it was decided that we would find something to eat, or something like that. trailing my 2 other friends’s vehicles, i was led to the road leading down to hilton. then everyone stopped and went to the side of the road. 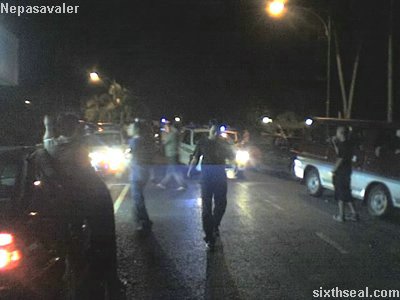 on the opp. side of the road was parked this wira in an unsightly manner (kuching 45 degrees style) and there was a huge crowd of malays mostly crowding the streets. from inside of the car me and my friend could hear shouting and the people was like having a mini riot or something on the streets. much like mardi gras without the drag. taking cue from the occupants of the vehicles in front, we went down to witness this strange and amazing event. not everyday do you get riots on the tranquil streets of kuching.

on getting down, i noticed a gold kancil parked in the middle of the road causing obstruction and basically shutting off our escape routes. having no options but to watch the chaos unfolding, we went to the safe haven of the sidewalk and joined a couple of curious bystanders. on the streets, people was running about shouting and a couple of them seems to be the catalyst for the whole even, chasing each other back and forth and trading shoves (in kuching i’ve never seen them punch, only shove). one guy who was obviously inebriated and deeply angry was lashing out at the kancil, kicking the side panels with much gusto. my car being parked just 2 metres away, i felt a slight tinge of worry. 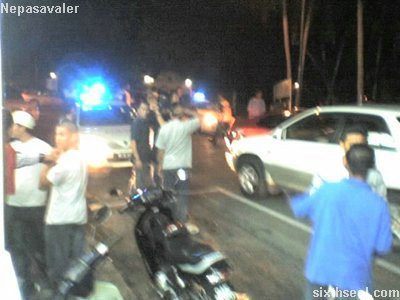 the shouting and chaos continued, until a police car turned into the road. the kancil made a quick exit (miraculous, nothing short of). and then the S&C continued. the police car had it’s lights on and everything going wooaaaahhhhwooaaaahhh and when it passed the spot in front of hilton carpark, one of the main offenders (mr. kick kancil) unleashed his fury on the patrol vehicle. i didn’t think he scathed the vehivle though, must have been adidas trainers those.

the first patrol car made a quick exit and he must have called backup for within a few minutes came like 3 patrol cars. a couple of CIDs and cops with mp5s emerged and it was still chaos with nobody knowing what was going on. a guy with a torn tee ran towards the cops, and general cussing could be heard. the crowd converged around the patrol cars and no, nothing like what happened in france. it was just general loud debates and then a couple of them went into 7-11 shouting and all that (in video).

the scene continued for a while, and then the fun was gone. everyone dispersed and an indian came over laughing saying no more fun when we was ‘interviewing’ the 7-11 staff. and that was that.

Thanks to Nepasavaler for the detailed narrative! Cheers! 🙂