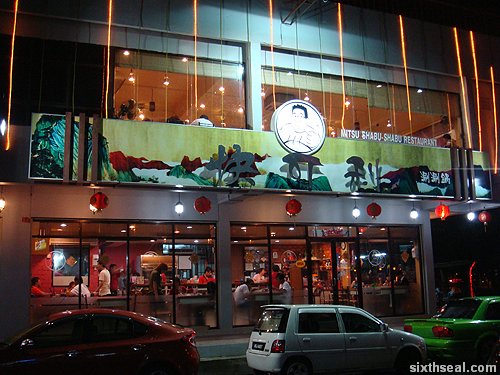 Mitsu
Shabu-Shabu Restaurant is one of the oldest and most successful Japanese
eating establishments in Sibu. Shabu-shabu roughly translates to “swish-swish” and is a Japanese variant of the hot pot. This makes it well
suited to local taste buds since the steamboat is already a popular
communal dining option over here. 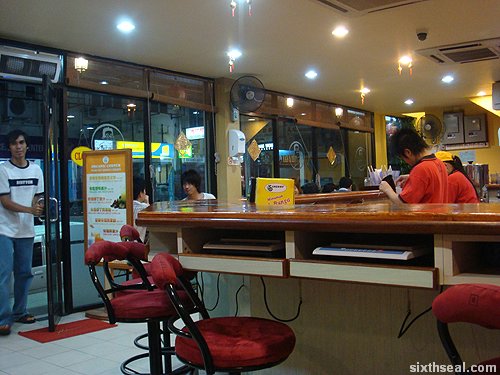 Mitsu
Shabu-Shabu is unique in a sense that all the seating arrangements have
individual hot pots recessed into the tabletop. The bar dining area and
tables all have personal hot pots. A table for four would have four
individual hot pots and a table of two would have, well, you know, two hot
pots. This must have made it a very popular destination during the Avian
flu scare a couple of years back when people jumped two feet back if you
even looked like you were about to sneeze. 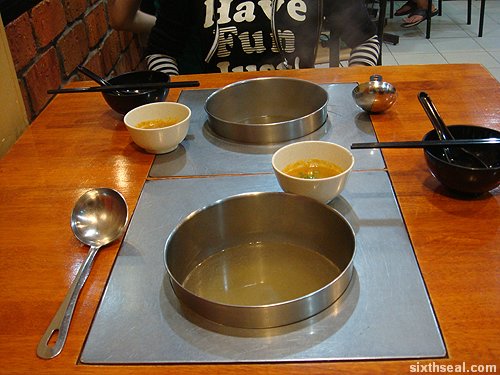 The proper method of eating shabu-shabu is to take a piece of the
thinly sliced meat and swish it around several times in the boiling soup
(broth). However, I noticed that it’s more common for the fine citizens of
Sibu to just dump the entire stash of ingredients lock, stock and barrel
into the hot pot. This method is more suited to the coarsely chopped
ingredients of a steamboat instead of the thinly sliced meats of
shabu-shabu. 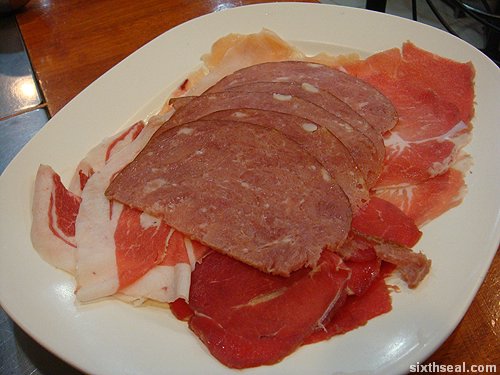 This is the Mitsu Mixed Beef
Meat Set (RM 25) which contains a selection of thinly sliced cuts –
tenderloin, rib eye, sirloin and even bacon (of the beef variety). 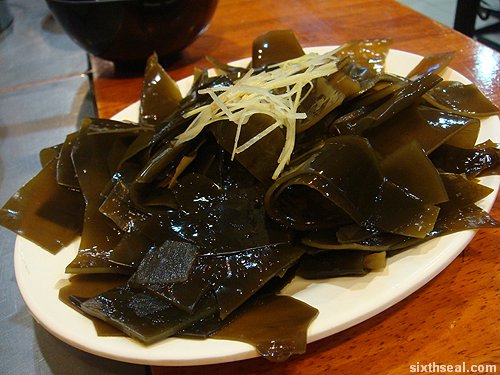 The main orders come with a dish of nori
(edible seaweed) which is something of a mandatory component of
shabu-shabu (or any other Japanese cuisine for that matter). 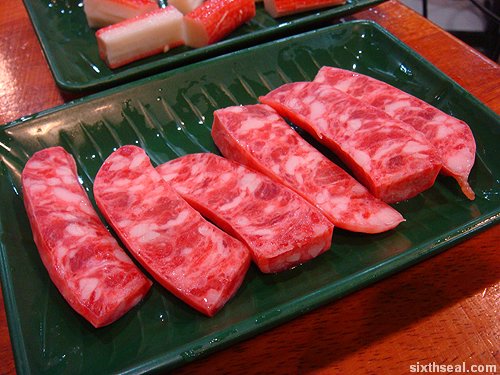 There are also a wide range of side orders from
the mundane to the obscure. This is Taiwanese pork sausage (RM 3). 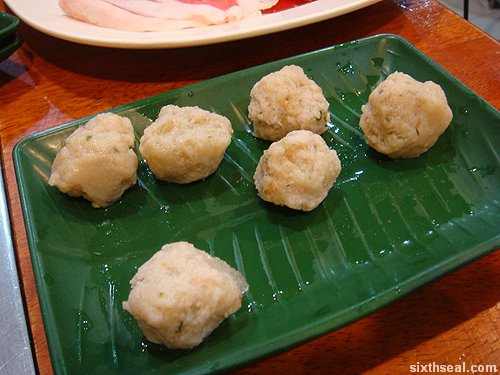 This is hand made chicken balls (stop
snickering) which is priced at RM 2 for six balls. 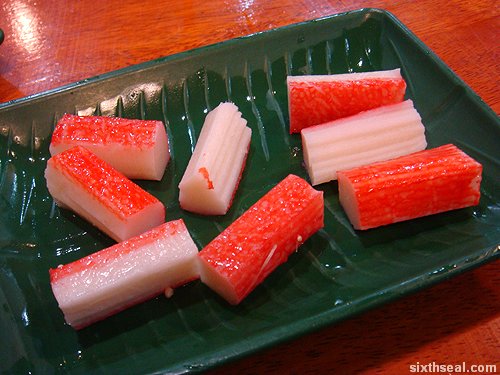 Crab sticks (RM 2) goes very well with hot
pots. It’s actually made of fish meat and flavored with crab (no idea how
they do that) and I love this stuff. 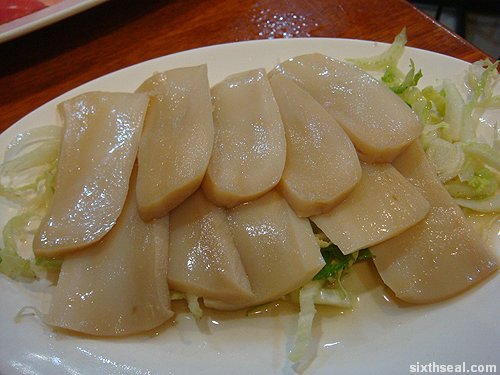 The
more exotic options include premium grade A1 Taiwan Abalone which is
priced at RM 13. 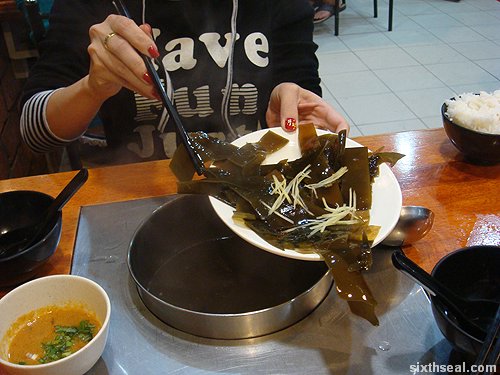 Faye is a big fan of
shortcuts so she dumped the entire plate into the broth instead of
swishing individual slices of meat around. It should be noted that she was
born and bred in Sibu. 😉 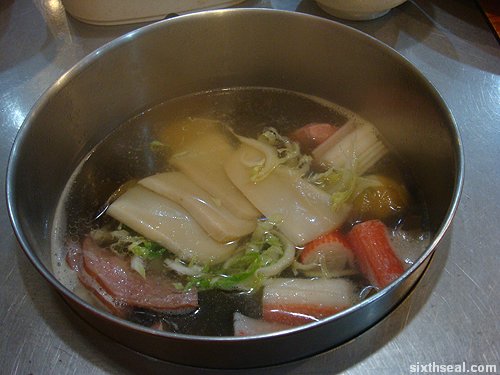 The poor meat
and vegetables (and even the abalone) was practically being boiled alive
in the hot pot. 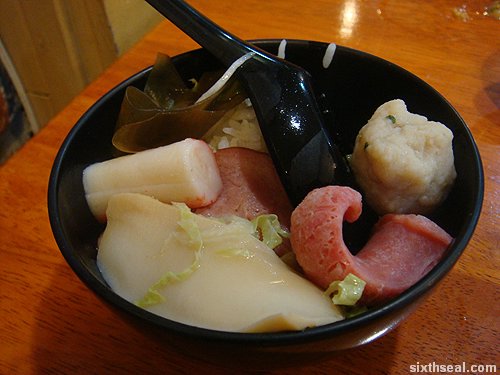 I quickly saved a couple
of them by scooping it up into a bowl. Shabu-shabu is eaten with goma
(sesame seed) sauce and steamed rice. 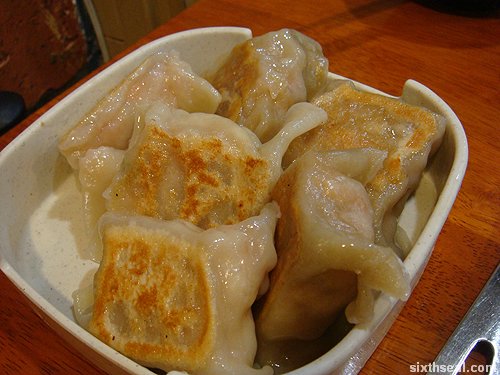 The
Seafood Dry Dumpling (RM 3.90) in Mitsu Shabu-Shabu is amazing. The gyoza
is filled with succulent prawns, squid, and fish before being deep
fried. 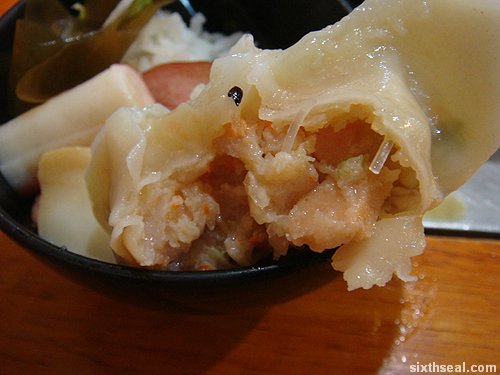 The flavor and moisture of the
ingredients are somehow preserved during the deep frying process,
resulting in a burst of flavor when you bite into one of these. Highly
recommended! 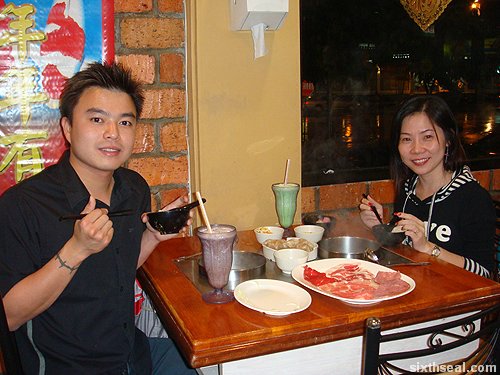 “What kind of restaurant
makes you cook your own food?” 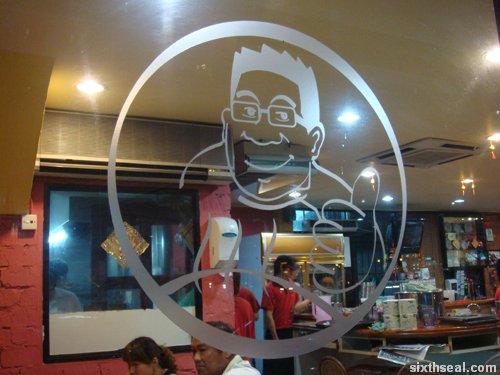 Mitsu
Shabu-Shabu Restaurant is open till late and adequately air-conditioned.
It’s a good destination for hot pots without being subjected to the
hyperhidrosis associated with steamboats eaten al fresco.