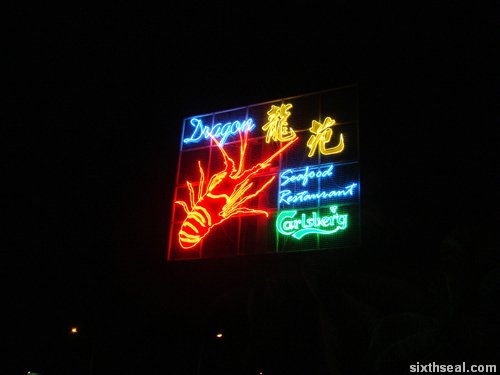 Dragon Seafood Restaurant is a popular destination for seafood about 15 minutes away from Miri. I went there with with a couple of friends to check out the famous seafood restaurant in Miri. There is a huge neon sign at the eating establishment, prominently located beside the road, so you won’t miss it. 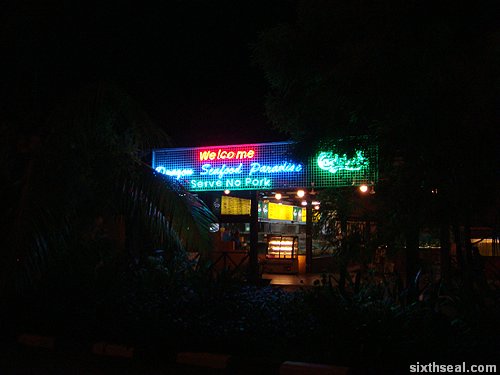 The actual restaurant itself is about 100 meters into the turning. The proprietor had the audacity to call it Dragon Seafood Paradise. 😉 It’s surrounded by palm trees and the structure is made of timber products which makes it very inviting. There was a bit of a cool breeze when we went there that night too. 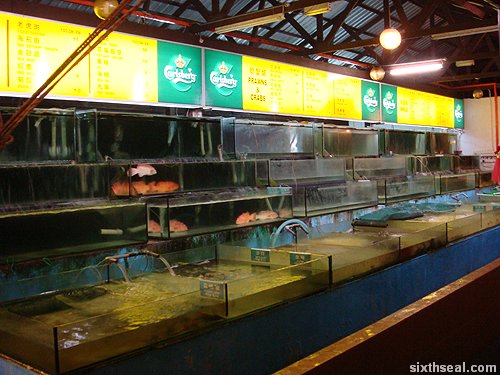 This is the signature aquariums popular in seafood establishments where the marine life is kept alive until the customer picks one. The chef then uses a net to haul the one you want before it’s cooked straight in the kitchen. There are various fishes, mussels, oysters, clams, crabs, lobsters and prawns on offer at Dragon Seafood Restaurant. 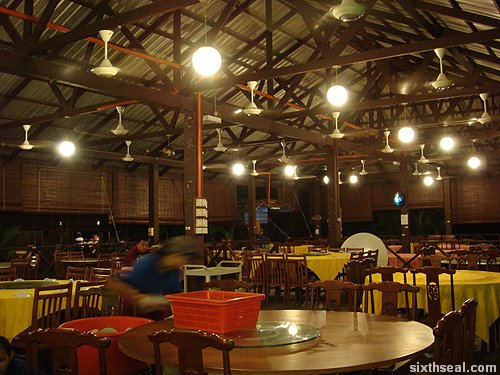 The interior of Dragon consists of a large hall dining area which can easily accommodate 300 people. There is no air conditioning at the restaurant, but ample fans bring down the temperature and the breeze coming in from the sea cools the place down significantly. There’s a lovely beach view due to the locality of the establishment too. 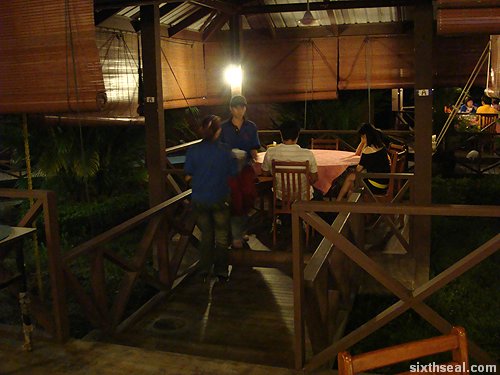 Dragon Seafood Restaurant also has several private dining alcoves which contains a single table and a wooden walkway leading to the hut. I noticed that this is one of the more popular options – probably coz the people wouldn’t want to mix with the proles at the hall dining area. 😉 There are wooden Venetian blinds on all sides of the wooden huts for additional privacy. 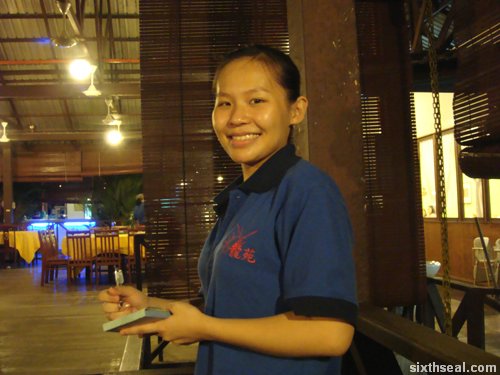 This is our waitress of the day. She recommended a couple of their signature dishes and was kind enough to pose for a photo for the blog. I was a little surprised when she mentioned that she blogs too (in Chinese). Interesting.. 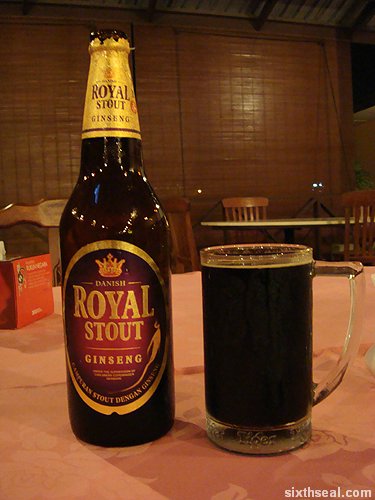 I think that seafood is best paired with beer (or stout) and I ordered Danish Royal Stout Ginseng which is manufactured under the Carlsberg group. Carlsberg sponsored the neon billboard of Dragon Seafood Restaurant – it’s in the first photo. This stout is rich and goes well with seafood. The addition of ginseng is a great idea as it contributes to the rich flavor of the stout. 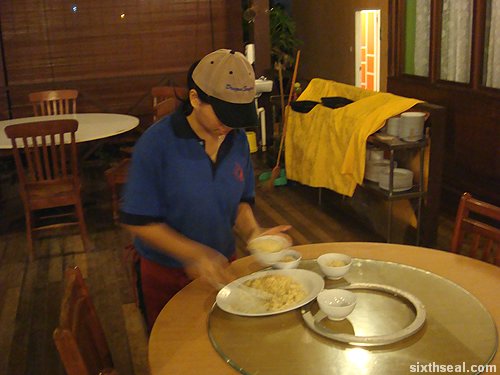 The first dish that came out was the Dragon Garlic Rice with Seafood. It’s customary for Chinese restaurants to divide the dish on another table into smaller bowls before serving it. This only applies to soup and rice though. The remaining rice is left at the center of the table for second helpings. 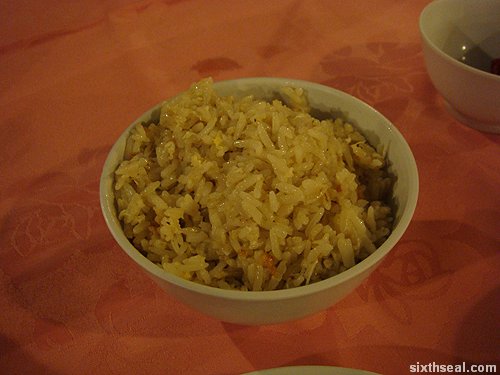 The Dragon Garlic Rice with Seafood tastes good. This is one of their flagship dishes that the waitress recommended in place of plain steamed rice. There are bits of seafood inside the rice and the garlic rice is done just right – perceptible, but not overpowering. It’ll still wreck all sorts of havoc with your breath though. This dish would give you some serious halitosis problems but it tastes great! 😉 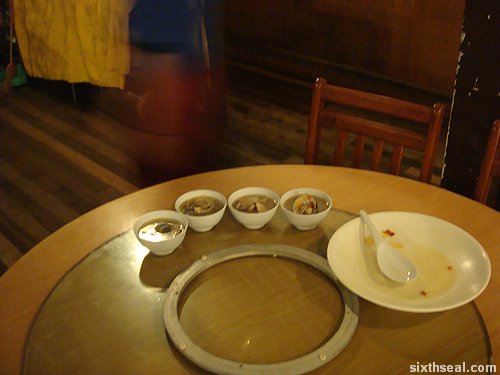 The next dish was the Seafood Soup. It was also divided on the adjescent table and divided into four (4) equal servings before the bowls were passed to us. 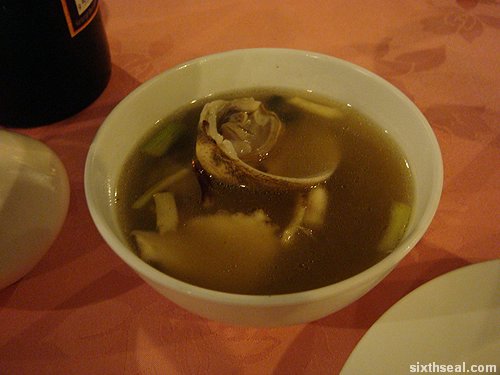 The Seafood Soup had clams, abalone and fish pieces. It’s more like a broth – the liquid is clear and infused with flavors from the seafood ingredients. 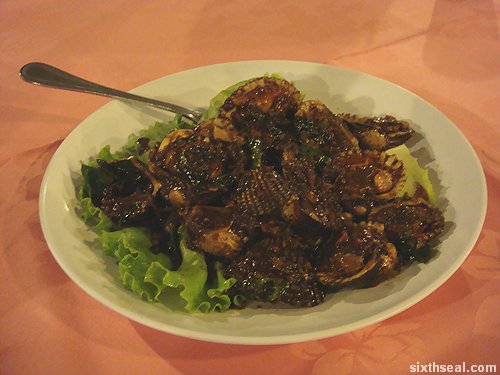 This is a clam dish cooked with a variety of herbs and spices. The clams are huge and different from the ones we get over here. It’s surprisingly tender and juicy too. The best thing about the clams is that it’s fresh, unlike the ones we get over in Sibu which tend to have a bit of an odor associated with it. 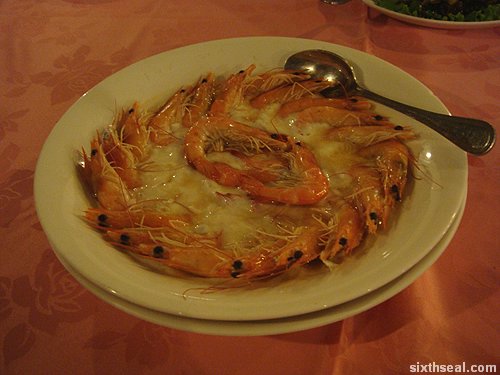 The next dish is Faye’s favorite seafood order – prawns steamed with eggs. The implementation at Dragon Seafood Restaurant is nice and the presentation is better than the regular restaurants. The prawns were tender enough to be eaten wholesale together with the shell. Well, at least that’s how I eat it, but then again, I’ve been told I have a cast iron stomach. 😉 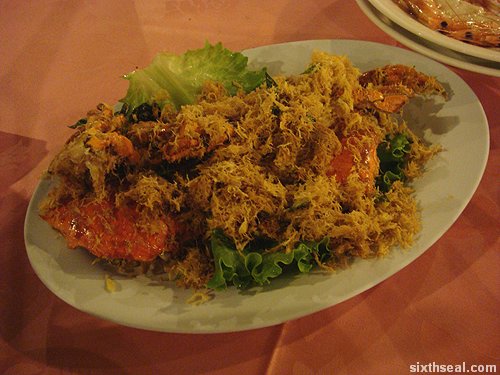 The final dish was butter crabs. The crabs we eat over here tend to be cooked with eggs or chilli but there is now an increasing trend of ordering butter crabs. The crabs are deep fried with butter to create fluffy buttery pieces. I love this dish, and I could also eat the shell (except for the huge ones) which surprised my dining companions. 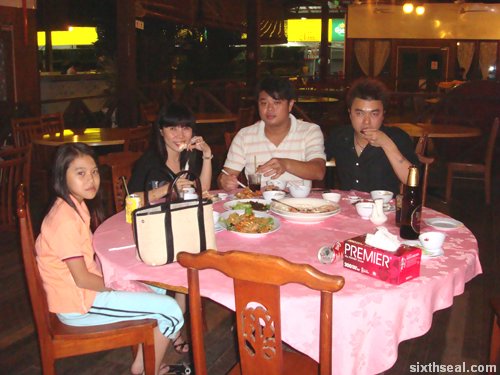 Dragon Seafood Restaurant is a nice
eating establishment that s
pecializes in seafood. The seafood is fresh and the service is attentive. It can be a little far from Miri town but it’s worth the drive.