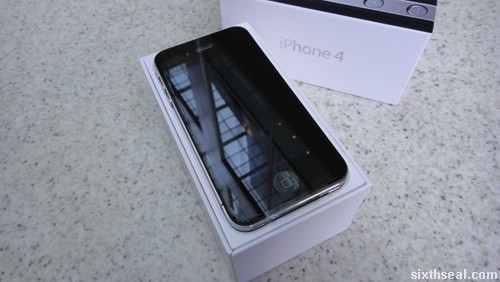 I’ll give you a bit of history about myself. I’m an early adopter – my first PDA was a Palm m505 back in 2001 and I’ve used Pocket PCs, Blackberry and Windows Mobile smartphone but never one with an Apple OS. 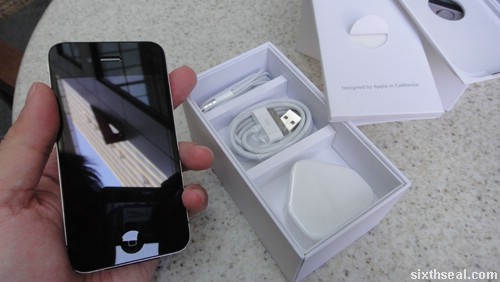 I was determined to let the iPhone 4 be my first induction into the world of Apple and all that it has to offer so during the Maxis iPhone 4 launch, I got one and tested it out. 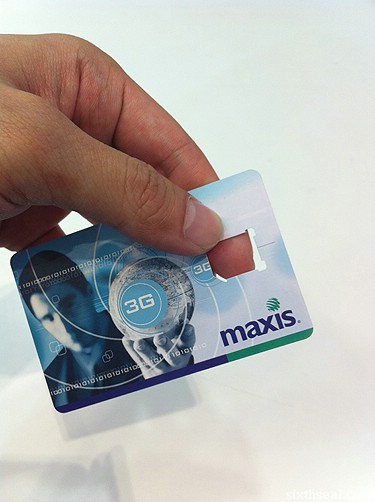 The iPhone 4 uses a microSIM, which is a bit of a hassle considering I have two Maxis devices. I switched to a microSIM for the review and used a microSIM adapter but in the long run I think I’ll get another SIM from Maxis. 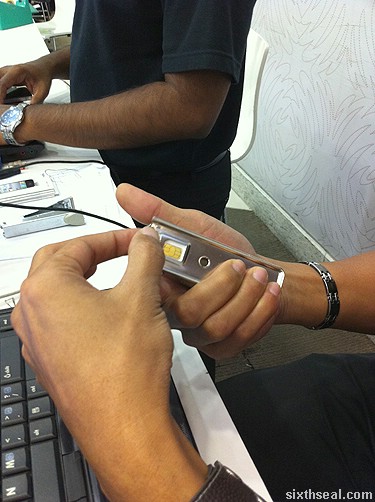 I saw someone getting his Hotlink SIM card cut into a microSIM at the Maxis Center. You can probably do it yourself but Maxis has the proper tool to get it down to size.

That’s one option if you don’t want to go for a microSIM swap. 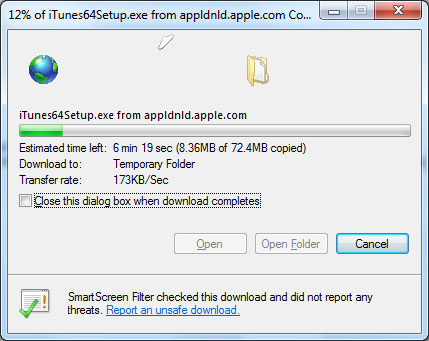 The first thing I did when I got everything up and running is to download iTunes and do an upgrade to iOS 4.1. It has a whole host of features ranging from a new HDR photography setting to video uploads straight to YouTube. I was surprised at the ease of a core upgrade – it’s just a click away. This review is done using an iPhone 4 running iOS 4.1. 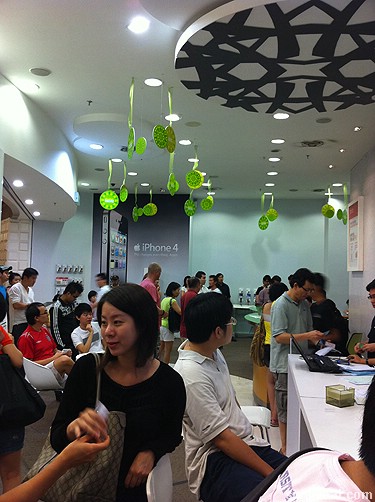 Anyway, I have heard much about the HD video recording and camera capabilities of the iPhone 4 and it didn’t let me down. You can tap the screen to focus when taking photos and videos.

I like the crisp video recording and the easy to use camera (which boasts 5 MP with LED flash). It’s also easy to use and great for the times when you don’t want to lug out another digicam. All the photos in this post are taken using the iPhone 4 except for screengrabs and the ones which features the iPhone 4 in it (obviously). 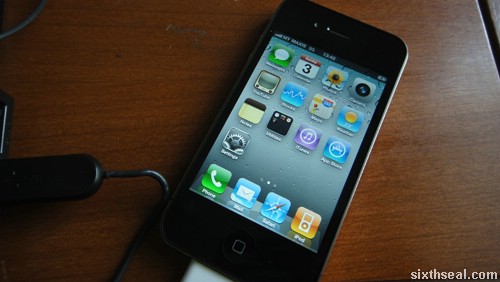 There is also a geotagging feature which is very nifty for us but I imagine it’s not something members of Al-Qaeda would appreciate very much.

You can opt to turn it off though. 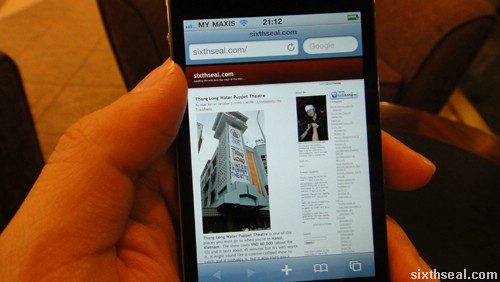 The iPhone 4 also has Retina Display which truly showcases the high resolution 3.5″ screen. It’s not just anti-aliasing but a true testimony to the rich and crisp display. You can zoom in to photos, games and eBooks and everything will still look awesome! 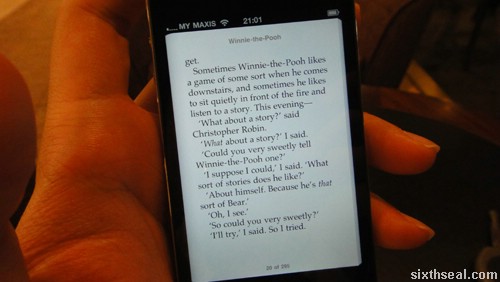 I don’t need it that much considering I’m not lacking in eyesight but it’s a useful feature to have when someone sends you a photo in an email with a high resolution photo of their friend and you want to…er, take a closer look, shall we say, at her features. 😉 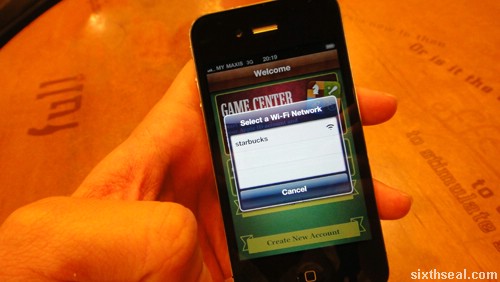 The other feature I really liked which is lacking in all the other smartphones I’ve used is the auto WiFi detect feature.

The application that impressed me the most is FaceTime. I would even go so far as to call it the “killer app” of the iPhone 4. You know how the Blackberry has BBM? Well, this is like a souped up BBM that goes way beyond text and into the realm of real time video calls! 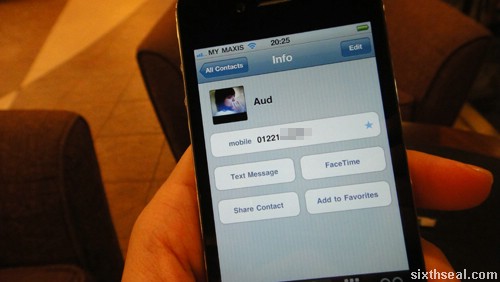 FaceTime only requires WiFi to work so you won’t have to go on roaming when you’re out of the country (unlike BBM). If you’re travelling and you have a work related call or just want to show your friends the place you’re at, use FaceTime! It’s free!

The iPhone 4 has two cameras like most video call enabled smartphones. However, what differentiates FaceTime is that you can instantly switch from the front camera to the back one with a tap of the screen to show the person you’re calling where you are. It sounds like a no brainer but it totally blew me away! 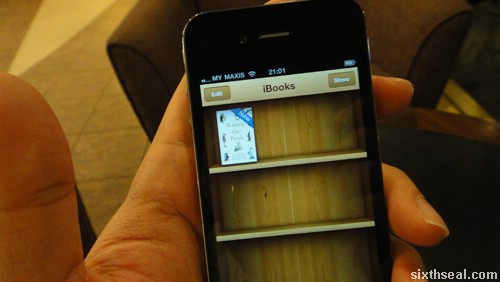 I’m a newbie to the iPhone as I mentioned and what (pleasantly) surprised me is the ease of which you can purchase applications and books. There is no need to muck around and sync stuff or manually enter your payment details. Your credit card details are stored securely via iTunes and you can just tap and purchase on your iPhone 4!

It is also rather dangerous for me since I’m quite the impulsive shopper. I just tap and buy and the next thing I know I’ve got more apps than I need and a morbid fear of my credit card statement. 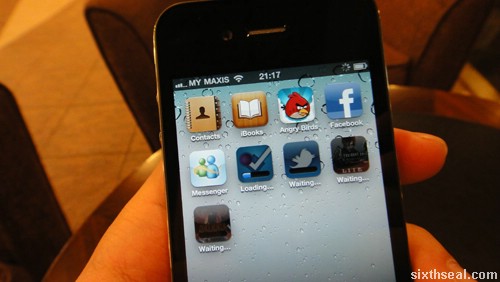 However, most of the essential applications are free so just grab those and you’ll be ready to go! Twitter, Facebook, foursquare, Messenger and more is just a quick download away so you’ll be able to communicate with your friends whenever, wherever.

I like how some of the applications have more features on the iPhone 4 compared to other smartphones. 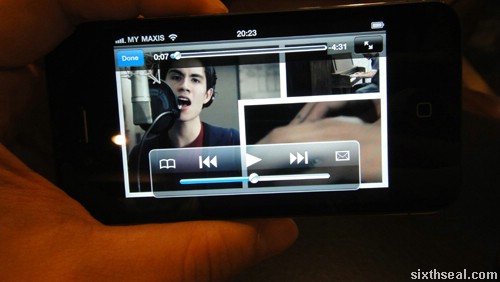 YouTube works very well on the iPhone 4 due to the high resolution screen and I didn’t have any of the so called antenna issues while making calls so it’s all good to me! 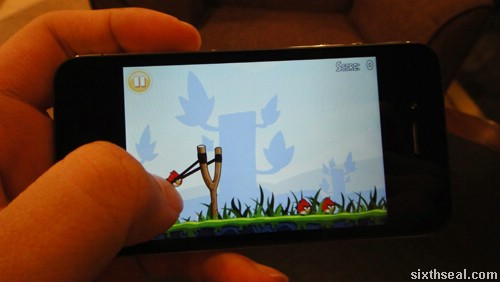 I love the games they have on the iPhone 4 too! =D 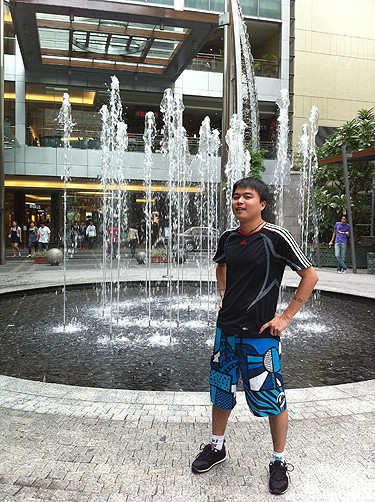 It is a device that looks good (hey, it’s an important factor for some people). The sleek and slim design is aesthetically pleasing and you’ll be tempted to put your iPhone 4 on the table just to get admiring stares from people. * 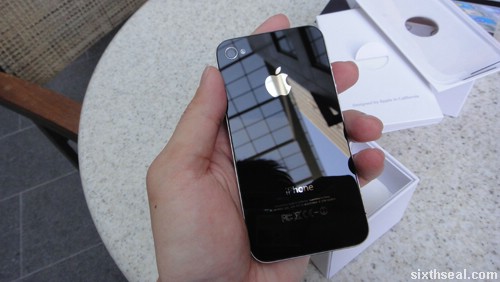 The iPhone 4 is the epitome of Apple’s philosophy – a user friendly phone that packs a lot of technological features bundled into a sleek and sexy device. I’ve been using it since I got it at the Maxis launch and I’m lovin’ it! 🙂

167 thoughts on “My experience with the iPhone 4”