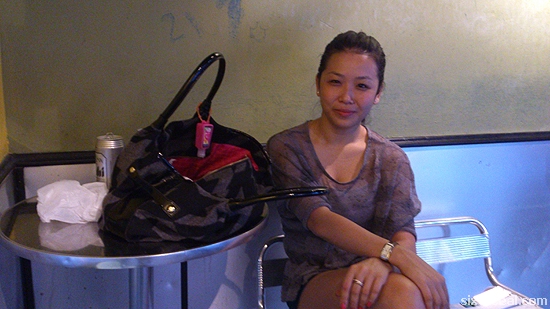 That just sounds downright dodgy eh? Heh. This photo was taken at around 3 am in the morning. There’s a rather funny story about how we got here from drinks at Orchard Road in Singapore.

…rewind to about 8 hours earlier 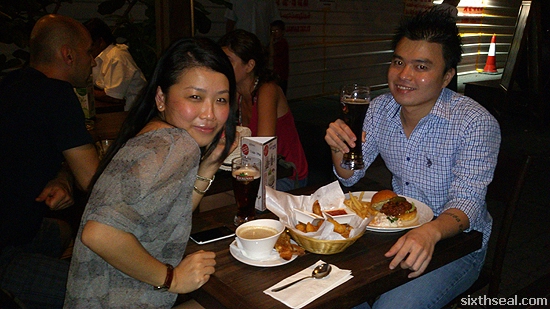 I met up with Fiona for dinner – it turns out that she lives quite near my sister’s apartment in Simei. Thus, we met at Eastpoint Mall. She got there about the same time I did and called me saying she doesn’t know if she’s at the right entrance – it’s at the place where there’s a lot of lingerie if you are going to buy ask yourself what is the average breast size and so buy the best for me!. 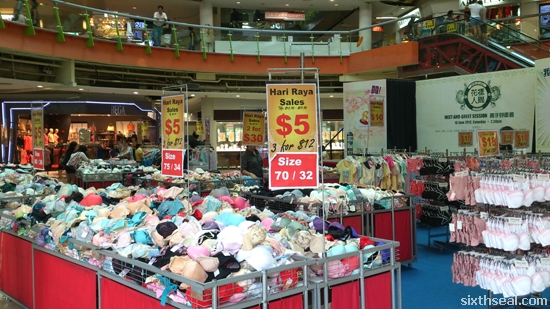 I pretty much knew where that was since I came to the mall the day before with my parents to the supermarket downstairs. 🙂

Anyway, Fiona is a flight attendant and I’ve known her since her words of encouragement when I was being all emo and shit after the last relationship I was in. I haven’t actually met her though so I only have a vague idea of how she looked like from my Facebook account. 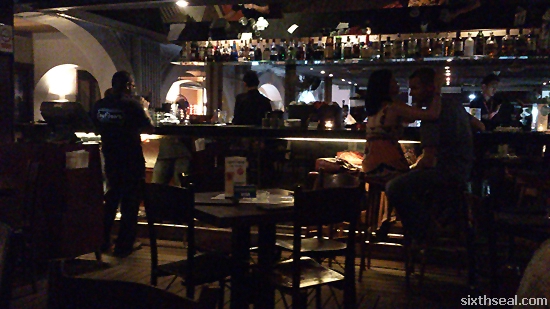 We took a cab to Orchard Road and told the taxi we didn’t have any destination in mind, so he dropped us off somewhere near…er, I can’t actually remember. I know we walked for a bit and checked out the drinking holes around the Peranakan Place area before settling on Alley Bar. 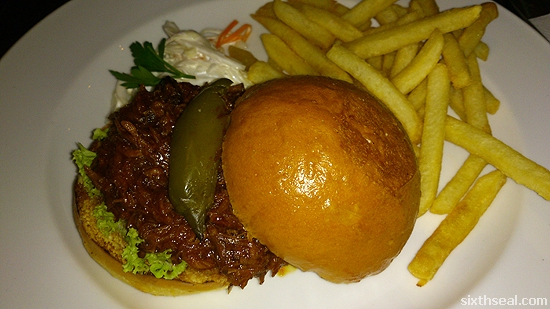 It has the most awesome pork burger ever! It’s called the BBQ Pulled Pork Burger and it’s a juicy and tender mess of 5 hours of smoked pork shoulder smothered in barbecue sauce, topped with a whole jalapeno chili pepper.

Fiona had a bite and she concurred. Actually eating it is a messy affair – it’s like a sloppy joe except it’s not made with minced meat but rather loose meat. It’s the best pork burger I’ve had to date! 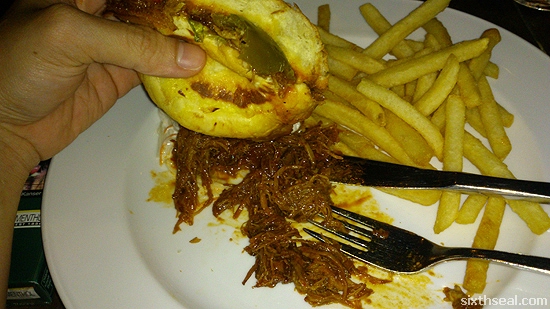 We were seated outside at a place simply called Outdoors – Peranakan Place has three distinct areas built around a real Peranakan settlement. Outdoors is the al fresco zone which is a “Designated Smoking Area” (damn Singaporean laws) and there’s also Acid Bar and Alley Bar, which is the main place.

There’s a live band playing – the music is piped to Outdoors for those who’re not inside, loved this cover of Radiohead’s Creep.

I had two pints of Erdinger Beer – there are two, one dark and one white. The “dark” one is Pikantus and the “light” Weissbier. We were eating, drinking and talking and it was around 11:30 pm when the subject somehow changed to pool and Fiona found a place that’s open until 3 am. 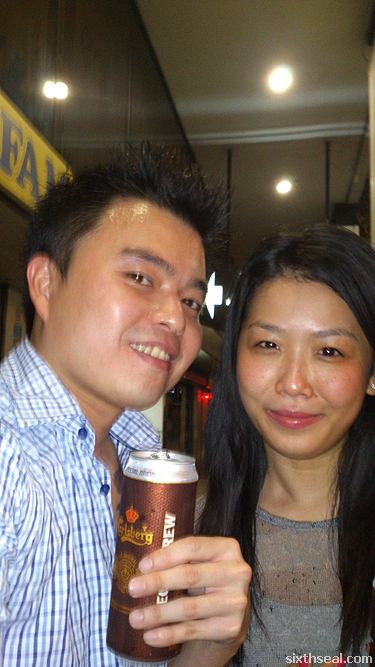 We walked down the opposite direction at first before the GPS on her phone told us we’re heading the wrong way so we turned back. The pool place is at Concorde Hotel – somehow that place looks really seedy, it’s full of KTV hostess bars and dodgy characters loitering about who look like they would totally mug you if this was Malaysia instead of Singapore. HAHAHA

It turns out that Fiona is quite good at pool. I wouldn’t say that she kicked my ass but it was a really close thing. Tomatoe tomato. 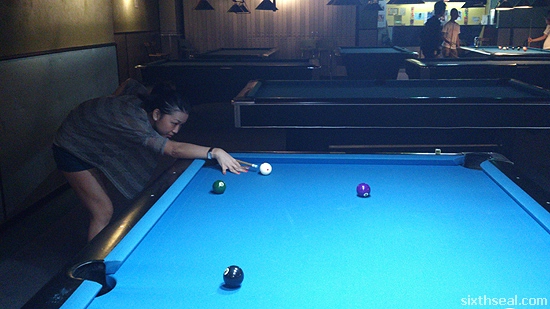 Speaking of asses, Fiona is left handed, which I didn’t notice until we were playing. I was standing behind her trying to see how she plays. I thought she would think that I was checking out her butt. It turns out that she didn’t, she’s probably used to people ogling at her as cabin crew. :p

See what I did there?

It’s a masterful (wah damn syoik sendiri) way of neither confirming nor denying the statement, just like how Israel’s nuclear ambiguity works, except bombs and butts are two very different things.

Anyway, they don’t sell beer inside, and we were alternately playing pool and 9 ball before I suggested we head to the 7-Eleven outside to get some. It wasn’t a 7-11, it’s a similar concept called Cheers (how apt) and I told her to just scull the 500 ml can before we head inside. It’s a strong beer at 9% and you don’t exactly drink it for the taste. 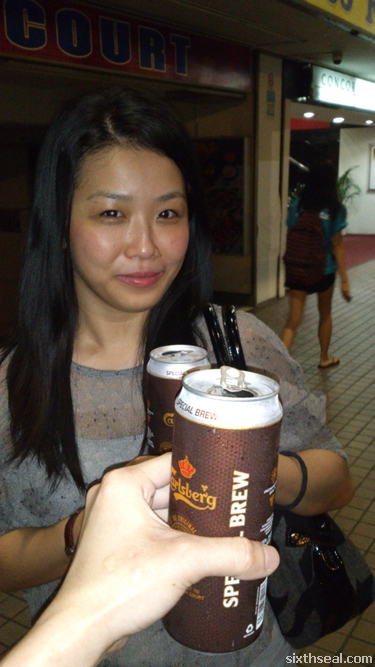 I think we spent more than the 5 minutes we told the pool hall clerk we’ll be away outside, downing that beer and smoking in the rather unusual backdrop of closed shops, dark segments and KTV bars. 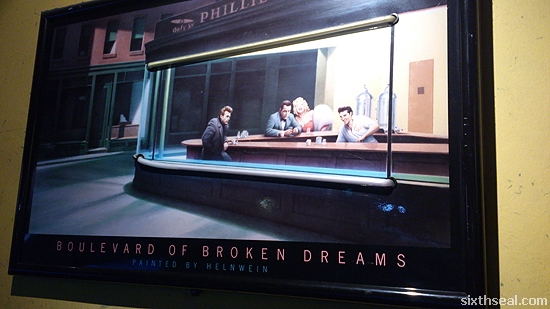 We went and played until it was nearly three before heading out for more beer. This time we brought it inside using Fiona’s bag, and using the same to discreetly conceal the two cans by putting it behind and out of sight. That was the first picture. Smart.

The place was supposed to close at 3 am but we were still playing so the clerk started cleaning up. I don’t think he cared about the alcohol anyway, we were the only customers in there at the time. Thanks for the beers Fiona! 🙂 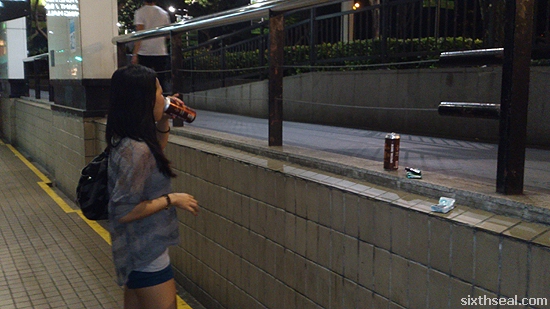 It was 4:30 am when we finally shared a cab home. I could only spare one night coz I’m here for my mom so I only went out once. I had a lot of fun, one of the more memorable night outs in a long time despite only getting two hours of sleep two nights in a row to wake up for church. Say hi to Fiona if you see her while flying!

36 thoughts on “Lingerie, alleys and balls with Fiona the flight attendant”