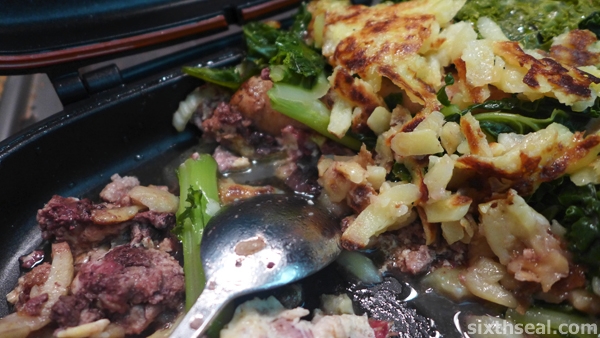 This is my attempt to do a cottage pie with lots of pork inside a pressure pan with a Rosti topping instead of mashed potatoes. I think it turned out pretty good despite the medley of ingredients – that’s what makes it work! 🙂 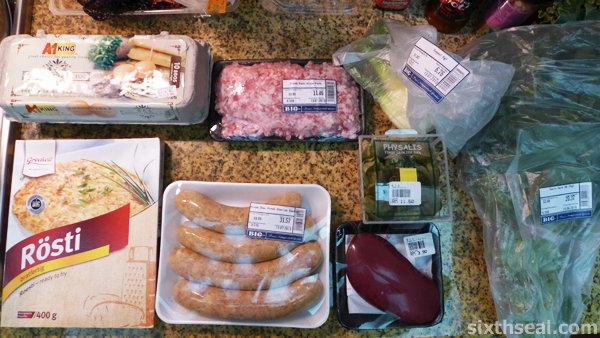 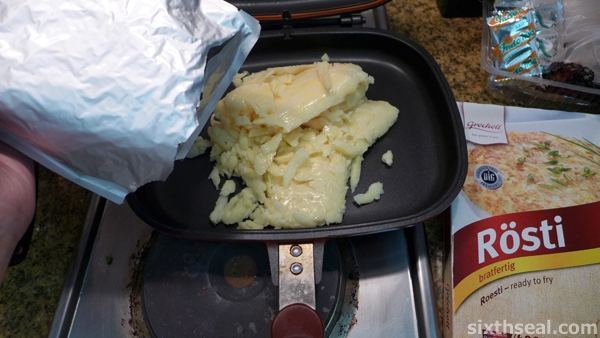 I made the Rosti topping first. It’s a Swiss potato dish that comes out flat. It consists of sliced potatoes and herbs and you can make your own but we bought this packaged Rosti that had just enough to fill the pan. 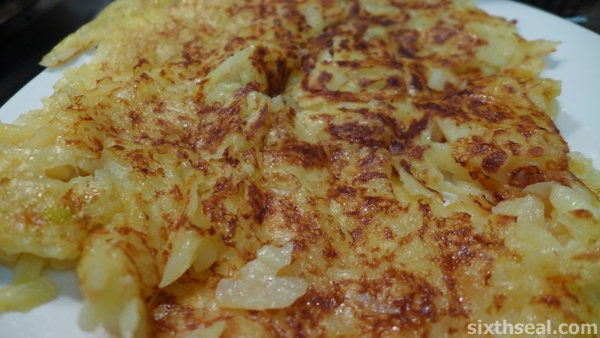 I needed it to fill the pan coz it’s supposed to be a cottage pie – like a Shepard’s pie, the Rosti needed to cover all the ingredients underneath. I pan fried it until it was cooked and set it off to the side while I made the other ingredients in the pie. 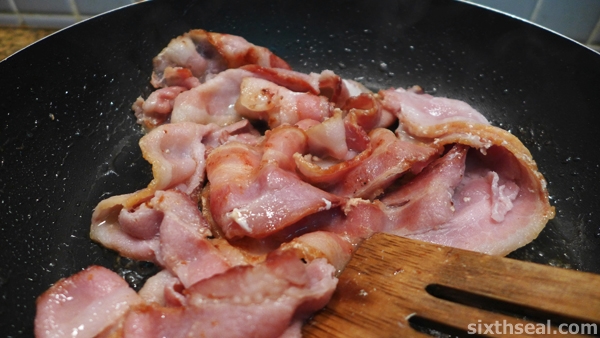 Next up was the bacon. I fried about 12 rashers of streaky bacon so I ended up with about 3 heaped tablespoons of fragrant pork oil. 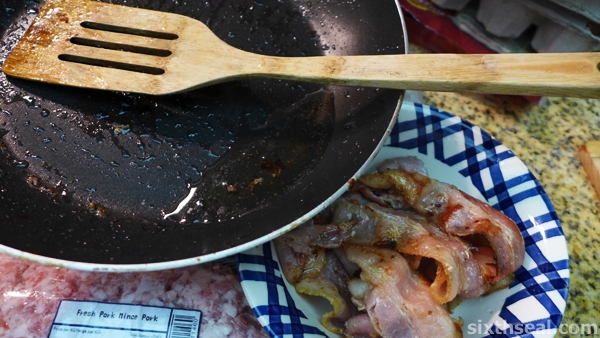 Check it out! All this yield from just a dozen rashers of bacon. 🙂 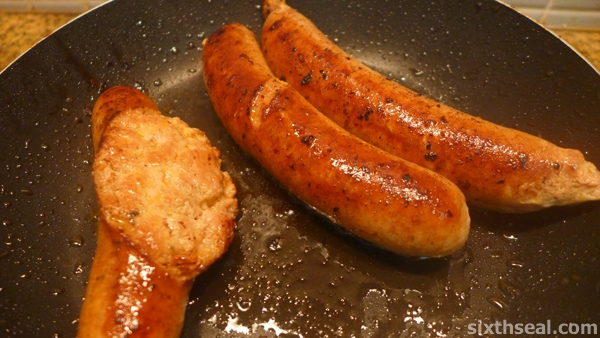 The oil was used to fry up the fresh Chorizo sausages. I chose the fresh Chorizos as opposed to the cured sausage coz I didn’t want the flavorful sausages to overpower the taste of the pie. 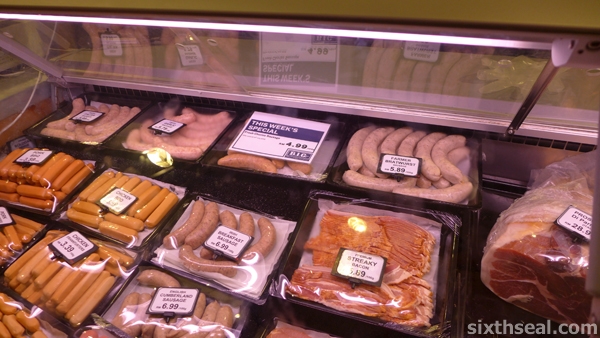 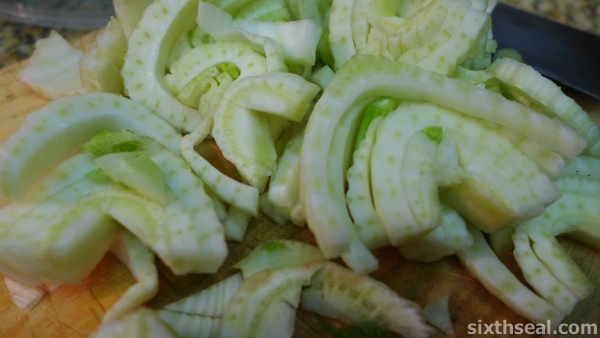 Next, I cut up the fennel to small pieces and set it aside. I learned how to prepare fennel from a YouTube video and wanted to add it to the pie. Again, set this aside. I didn’t need to cook this so everything that needed to be cooked was given the heat treatment then set aside and the raw ingredients were just set to one side to be combined later in the cottage pie. 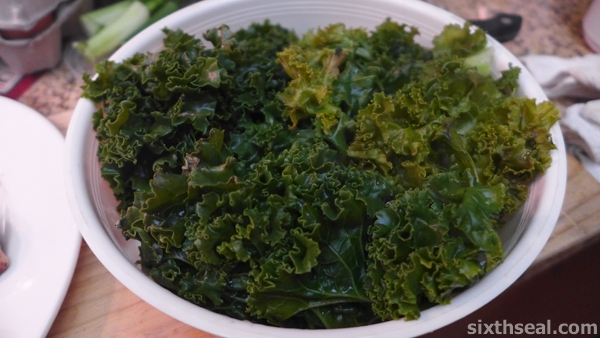 The curly kale was steamed while I was working on cooking the Chorizo sausages. Steamed kale is the best way to prepare it coz it retains all of it’s nutrients. It tastes delicious too! 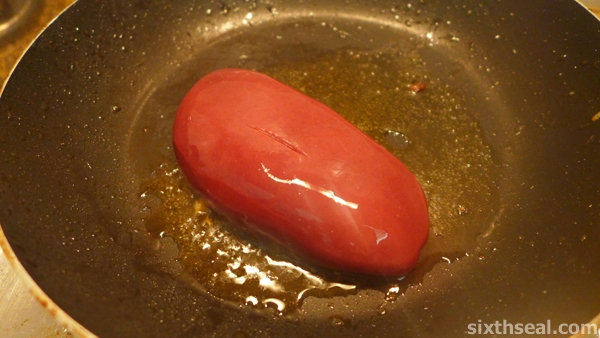 I went on to cook the whole pig kidney. I didn’t slice it up or do anything fancy – it was just chucked into the frying pan with the remainder of the oil from the bacon fry up and then cooked for a bit. 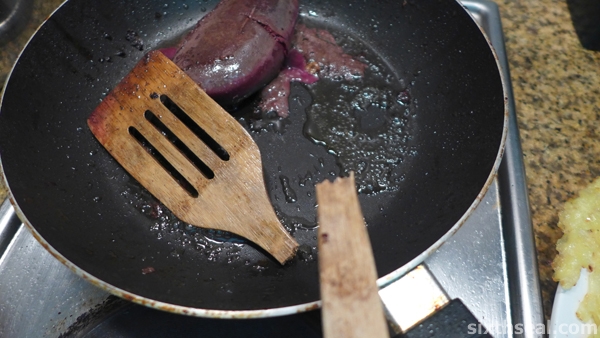 It was a bit of a challenge to do this coz I forgot to take it out of the freezer and I actually broke a spatula while trying to fry it evenly! 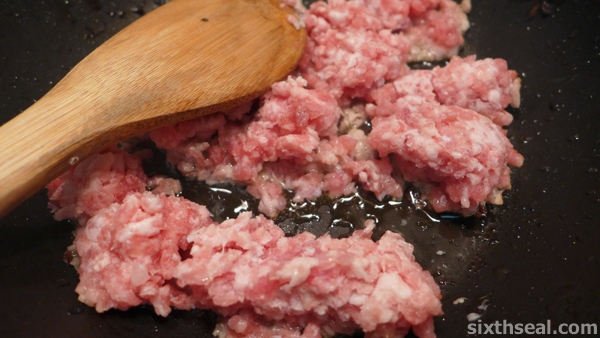 After replacing the spatula, I took about a pound of fresh minced pork and fried it. There was still bacon grease at this point! 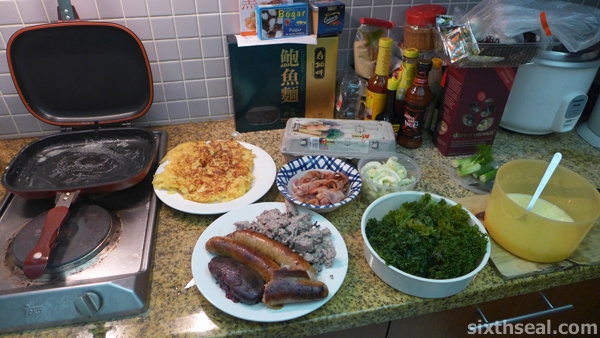 Now that I had everything I wanted to cook prepared and waiting set off and ready for the final combination. This is everything that goes into the Rosti cottage pie! 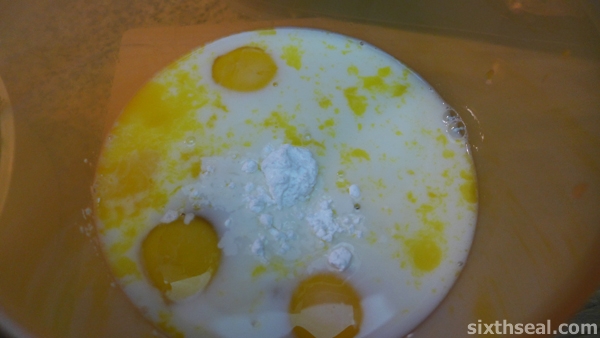 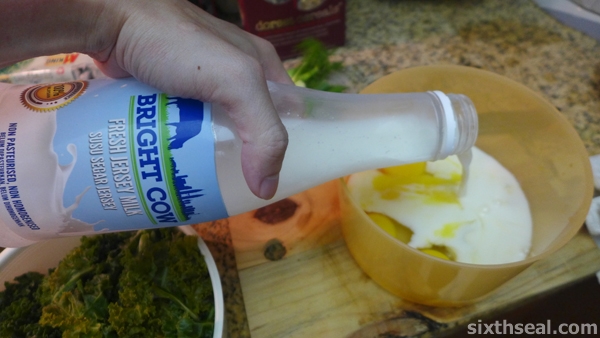 …before topping the mixture off with raw milk. This is an awesome find. It’s unpasteurized and non-homogenized milk. It’s supposed to be heated up before drinking (due to health concerns) but it tasted just fine from the bottle. Every bottle tastes different too coz there’s no homogenized treatment! I love this milk but it’s really *expensive* at about RM 9+ for 1 liter. 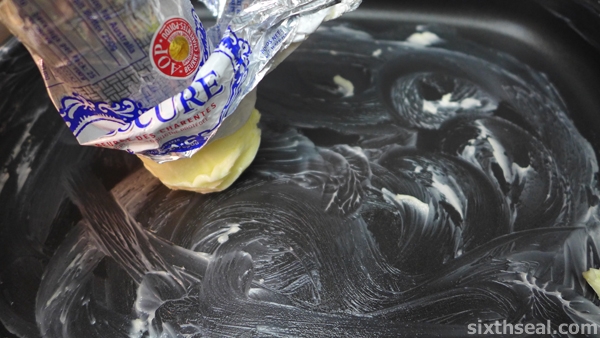 I also used a long tube of butter and greased up the surface of the non-stick pressure fryer. 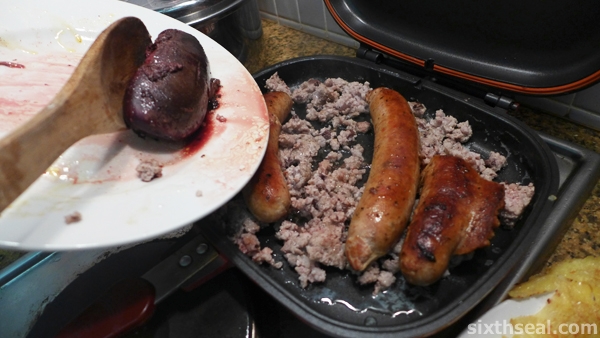 I then dumped everything except the vegetables into it – Chorizo sausages, bacon, minced pork, kidney. 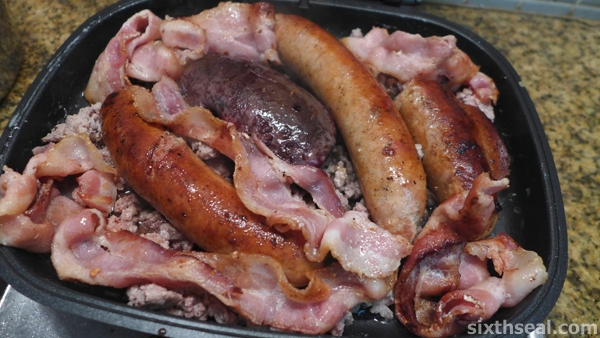 The egg + fresh milk + flour + baking powder mixture was poured to cover all the meat inside. 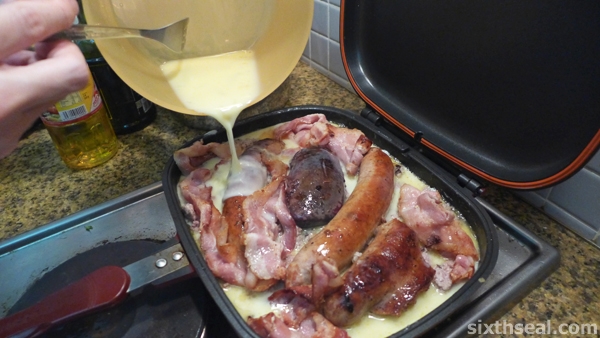 This was cooked for about 3 minutes and right before the egg mixture solidified, I put the pieces of sliced raw fennel into it. 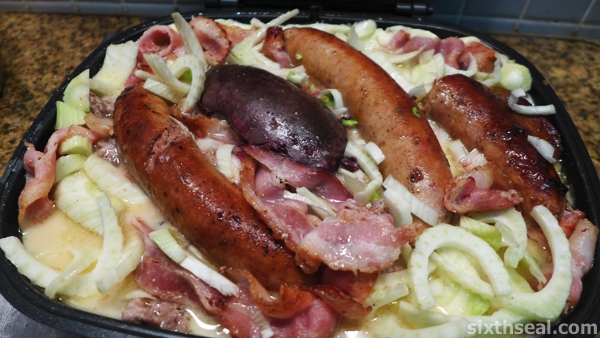 I then closed the pressure pan again and let it cook until everything was done. 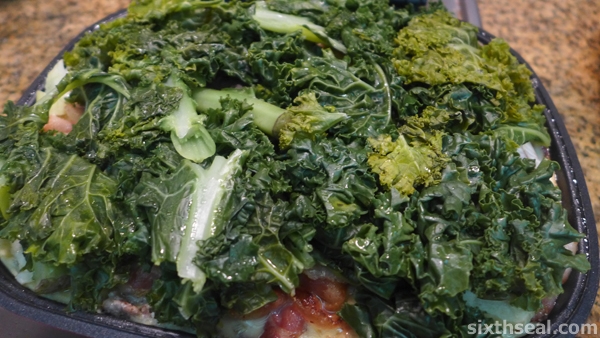 The steamed curly kale was added on top and then the pressure pan closed so that it’ll retain the pie shape. 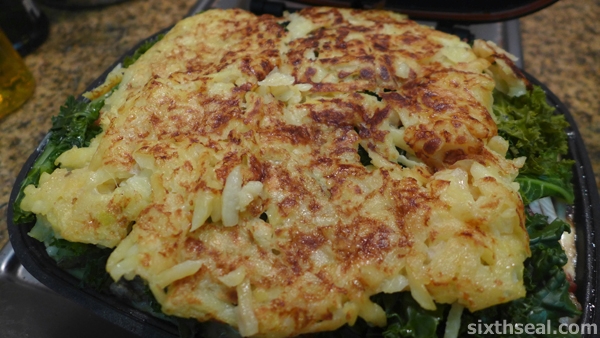 I left it for a couple of seconds before opening it again and sliding the cooked Rosti for the topping. It was left for another minute so the general shape of the cottage pie would be firm. 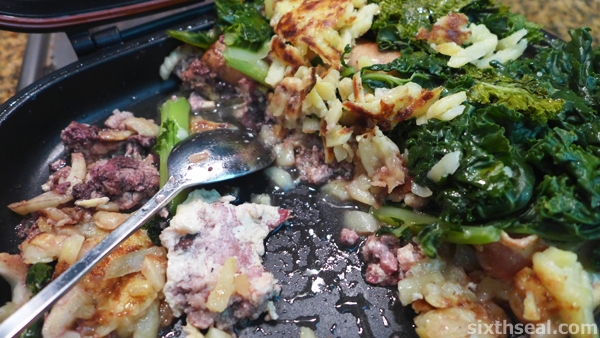 I served this just like a regular cottage pie. It tasted really good! The fresh Chorizo sausages and bacon added a lot of flavor to the pie. The minced pork filled it up and the generous bits of fennel and the curly kale topping made this into a full nutritious meal. 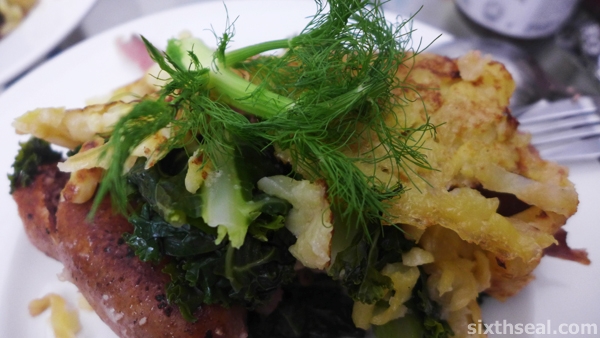 I think my Rosti cottage pie with fresh Chorizo sausages, bacon, minced pork, fennel, curly kale and kidney was quite awesome! My better half even ate more than her usual serving! 🙂