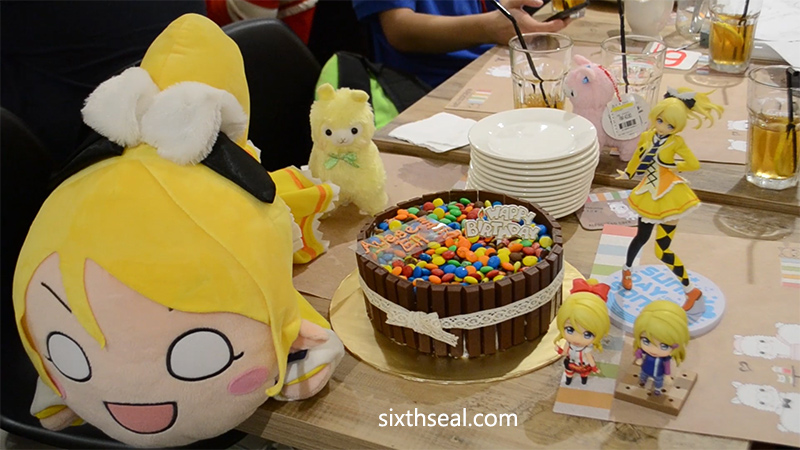 I know, it’s early. Elichika’s birthday is actually on the 21st of October but the Malaysian Love Livers celebrated it early last Sunday at Alpacasso Cafe @ AEON, Midvalley. I’ve always seen people on reddit celebrating various waifu birthdays and I thought it sounded like a lot of fun. I’ve just never seen any locally until I met Anson via the COSFAIR event where I filmed the MilkyWay girls. It might sound strange to celebrate a 2D anime character’s birthday but it’s actually a lot of fun to hang out with like-minded people and share something we’re all interested in. I think the fellowship comes first, the character’s birthday is just the pretext of meeting up. That’s the best way I can explain it to someone who doesn’t understand why people do this.

I’ve never quite gotten into Eli Ayase (the character) but I do like the seiyuu (voice actress). Nanjou is one of my two “best girls” (an anime term denoting your favorite) – the other being Pile (voicing Maki). I even started listening to fripside lately, the songs for A Certain Scientific Railgun are pretty good.

I just finished editing and putting together subtitles for the video of Eli’s birthday celebrations with the Malaysian Love Livers. I know my Chinese isn’t very good, and some of you might be surprised to learn that Mandarin is in fact my first language – I just can’t read or write. I also can’t speak it very well especially when people start using harder words so the subtitles might not be 100% accurate. I’m a little puzzled why I don’t understand the harder words too since I spoke Mandarin until I went to New Zealand to do high school at 15. 15 years is a long time to pick up a language! I think it’s mostly coz I never immersed myself in Chinese culture – I don’t listen to Chinese songs etc so I never had any reason to go beyond simple conversational use.

I still wanted to do the narration in Chinese though coz I like the idea of bilingual videos. However, I encourage you to turn on CC for English subtitles since they’re probably more accurate and conveys what I mean better. I wrote the text in English first before attempting to translate it verbally into spoken Mandarin and needless to say, it took a lot of takes.

Someone even brought a Kit Kat + M&M custom made cake for Eli’s birthday! We were the ones to eat it though. Haha.