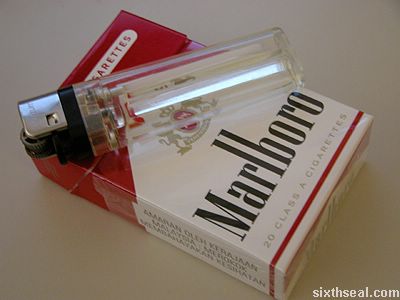 I didn’t know what lead to it, but the four of us started to walk
together and talk like old friends, joking around and everything. The
events during the school sports day started to bore us, so Ah Boon
suggested that we head off to smoke. Smoking! It was unheard of in my
limited social circle, which consisted mostly of “good” people, when I
was back home. I was apprehensive but attracted as well so I went along
even though I haven’t started smoking then. I was interested to try
though, but parental conditioning made me turn down the offer of
cigarettes by Ah Boon.

I was only 15 at that time as my birthday had not passed yet. I
still remember what I asked when Ah Boon, Tom, Aaron and Chen lighted
up. I said, aren’t you worried about lung cancer? Boon had a strange
answer – he didn’t mind dying early as long as it’s an enjoyable life
and smoking is one of life’s greater pleasures. I even remember what
everyone smokes – Ah Boon favors Dunhills but would go with Mild
Sevens. Tom would only smoke Dunhills or this Japanese brand of
cigarette that has one word – “kaze” for wind in the front. Aaron on
the other hand doesn’t care for anything except Davidoffs.

We walked around Church Corner, where my house and the high school
is located. There is dairy shop right there that has this dodgy looking
but nice guy who sells cigarettes and adult magazines to anyone, even
if you’re in school uniform. 🙂 It’s not your run of the mill Playboy
and Penthouse magazines, he carries the hardcore mags too, and always
wraps it in a black bag when selling to minors. Heh. The legal age to
purchase cigarettes was 16 at that time in New Zealand, but 1996 also
saw a legislation change that made the age limit 18 instead of 16.

I remember a funny incident that happened during the day of the
legislation change. I had started smoking later, and there was a very
strict but nearer dairy opposite my shop. I was unable to purchase
cigarettes till the day I turned 16, and I proudly displayed my Student
ID as prove of age and bought a pack of cigarettes…and the law
changed a scant week later, to which the strict but near dairy owner
went “Hah! I know you can’t be 18 coz you just turned 16 a week ago! No
cigarettes to minors.”.

That forced me to walk to the further but lenient dairy at church
corner. The four of us hung out once in a while, mostly in school, but
I was still going out more frequently with Sam and the others then.
Besides the drama production practice, we sometimes go to this youth
group, which is an interesting mix of half innocent kids and half not
so innocent teenagers. Cannabis was a common drug then, one tinny
(foil) goes for NZ$ 20 and it has about 1 gram or so of weed.

However, I have still not smoked nor taken any drugs at that point.
A lot of my friends are users (on Sam’s side), but I had read that
drugs are bad mmmkay, so I just passed the joint along whenever someone
has weed, which is quite frequent. The availability of cannabis and LSD
was to high school students was surprising. I was interested in
chemical and plant substances due to reading a lot about it and wanting
personal experience, but I was still not comfortable about even smoking
weed then.

My first cigarette was at this all nighter youth group function
where several vans full of people went Go Kart racing, then adjourned
to an indoor water park, before going to a laser tag game and then a
ball at some far away horticulture place before ending the night with
two back to back movies. I remember one of the movies I watched was
Mars Attacks! It was an all day till the next morning event, and it was
during the ball that I first started smoking.

There was this girl chain smoking the whole night, even making the
driver make stops to buy more cigarettes. Everyone calls her Kitty.
She’s from my school as well, but one year younger than me and I
remember Abba’s Dancing Queen playing during the ball and I was
standing beside her and she asked me if I wanted a smoke. I thought
about it and reckoned that since I was interested to try, now is a good
time as any.

We shared a cigarette and she laughed at my inability to inhale. 🙂
She taught me how to properly smoke a cigarette, not just holding the
smoke in the mouth and exhaling, but chasing the smoke down with
another intake of breath so it gets into your lungs. I wouldn’t say
that I liked the taste of tobacco, but it was a memorable experience
and the song that played during that time still reminds me of that day.