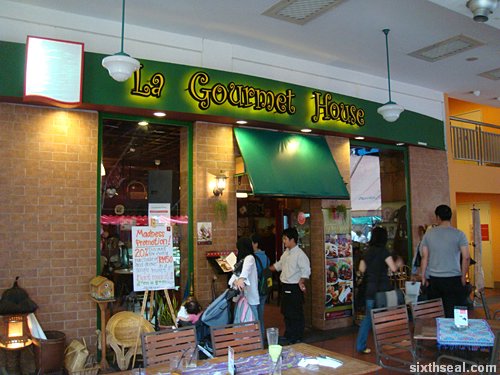 La Gourmet House is a Mediterranean restaurant located at the Curve. I was actually planning to go elsewhere but there was a heavy shower (not the golden type, the kind that rains on your parade) so we took refuge at the place. I haven’t heard of the establishment before but I reckon the “Buy 4 bottles of Tiger and get 1 free” promotion was quite alluring, so we decided to sit down for lunch. 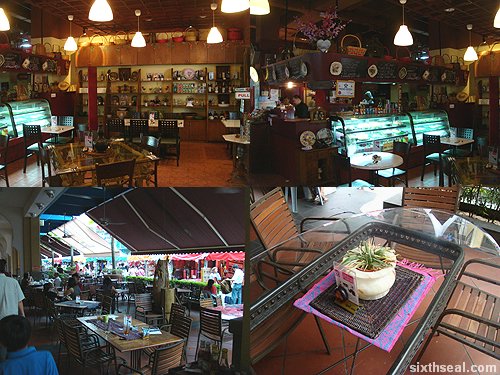 La Gourmet House claims European, Mediterranean and Spanish influences in the cuisine, creating a homely fusion of sorts. The interior seating arrangements are adorned with various Turkish (to my untrained and uncultured eye) fixtures and some of the tables have intricate designs. The al fresco dining area is thankfully protected from Mother Nature by a canopy system and is plumed with throw rugs. 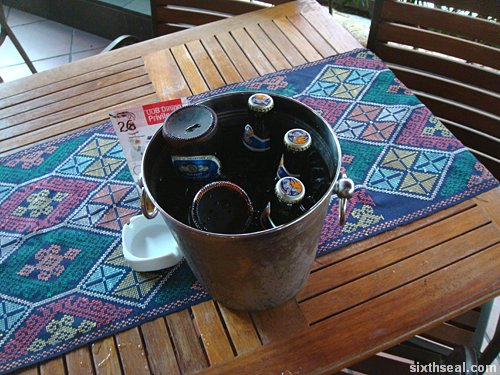 The beer is not the cheapest at the Curve (some places offer RM 32++ jugs) but it’s a pretty good deal at RM 48 for 5 bottles of local beer. The other beer they serve sounds German in origin and it’s priced at RM 22 per bottle, so I assume it’s an import. The ambiance of the place is great, very laid back and casual, with excellent service to boot. 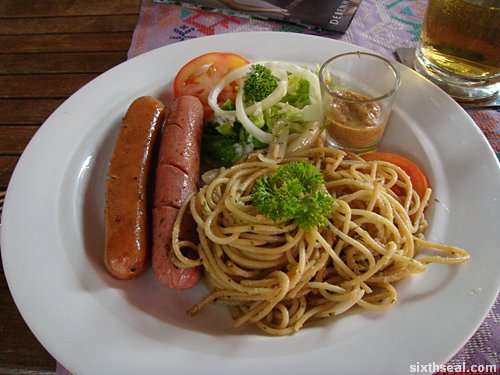 I had their signature dish – Anthony’s Sausage and Pasta (RM 25.80). It’s a pasta dish with your choice of two (2) sausages, tossed with balsamic and olive oil, mozzarella cheese and walnut pesto. I chose Chorizo (a Spanish sausage) and the German bratwurst. The dish is served with sauce on the side – a mixture of mustard and something else my unrefined palate couldn’t identify. 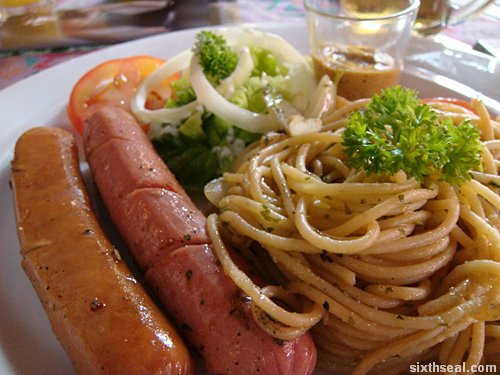 The pasta is done al dente and it absolutely delicious! Unfortunately, it was a little of the cold side when it got to our table. I wouldn’t discount the weather (it was raining) as a factor for the rapid cooling of the dish but it just didn’t taste as good as it would have, had it came out piping hot. The sausages are flavorful though, and I like the fact that you get to choose the types of sausage you want. 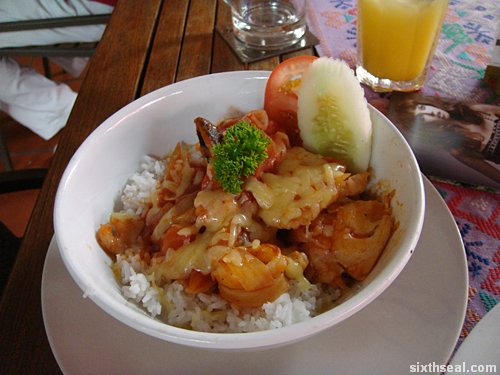 My girlfriend opted for their set lunch, dubbed “Gourmet Value Meals” at La Gourmet House. She had the Baked Seafood (RM 15.80), which comes with either juice or tea. The Baked Seafood dish is served on a bed of steamed rice (!), which I thought was quite unusual. We expected the entire dish to be baked e.g. topped with cheese before being baked in an oven. 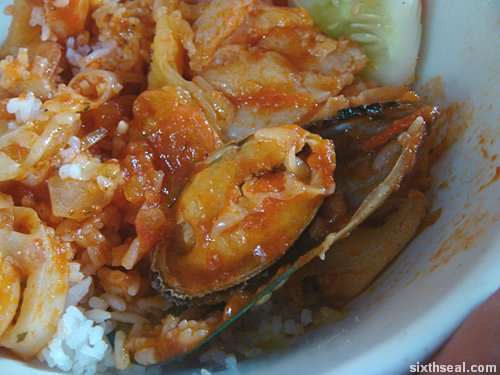 There were a few premium ingredients in the dish – mussels, prawns, fish and other miscellaneous marine life, enough to justify the price…but it just didn’t taste quite right with steamed rice.

I also ordered an appetizer – the Stuffed Bell Pepper (RM 23.80) that is marked with a little chef’s hat indicating a house specialty. The starter further intrigued me by the “Subject to availability” tag line appended to it. It’s filled with aromatic chicken mortadella and served with the chef’s special sauce. There are two peppers – one red and one green, each sliced in half and stuffed. 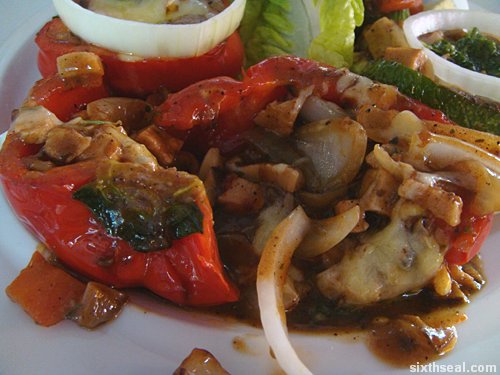 Unfortunately, this appetizer (dessert?) came only after we finished our meal, and it was cold when it came to the table. I didn’t quite understand this, as we were the only ones there besides another family that just got seated. I imagine it might have tasted better had it been warm at least, but in its current condition; it just didn’t do the dish justice. 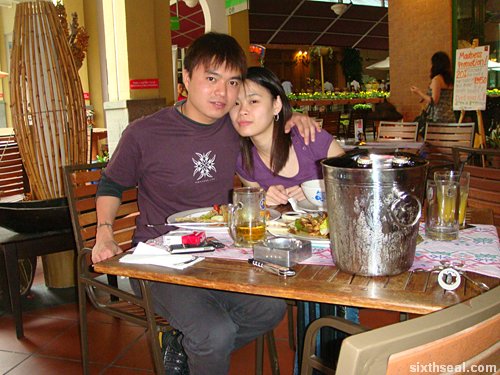 La Gourmet House at the Curve has a lot of potential, but it seems to be plagued by kitchen logistical glitches that manifests by cold dishes arriving at your table. The 4+1 beer promotion is also supposed to come with free tapas, which we didn’t get, and I didn’t realize until I looked at the bill today. I can’t attribute that to bad service (it was good, and quite attentive) so I really don’t know what’s going on there. I will go again for a second review a couple of months down the road and see how it goes. Cheers!