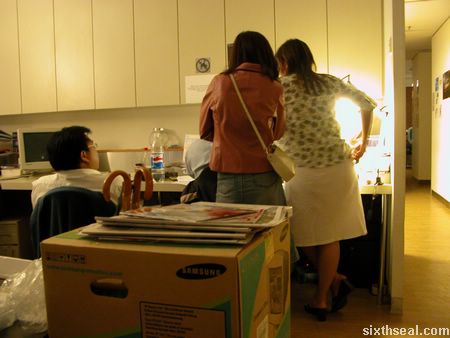 XM Malaysia midnight club (bound by a common project) – Ivan, Wai
Hing, Shirley, Suzanne, Huai Bin (me). Kelvin and Ganesh were also
around but not working on the same project.

It’s past 12 am in the morning and I’m still at the
office…together with about 6 other people, working on the Sony
Malaysia’s 30th Anniversary project. I just realized that I am an utter
hack today, I took ages to finish the main page and that’s not even
going into coding for dynamic responses on certain triggers. The main
page was just HTML and tables (I fucking hate tables…) and CSS and
yet I was slaving over it for most of the day. Granted, I was having a
borderline paracetamol (APAP) poisoning (don’t ask) and was throwing
up, having abdominal cramps etc but that’s no excuse… 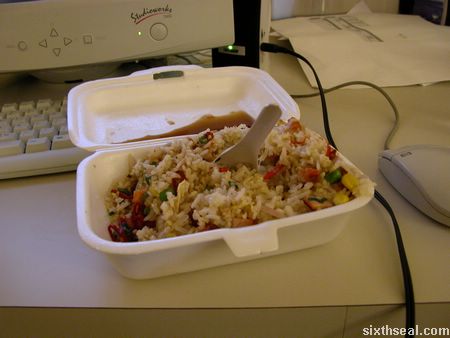 Dinner was provided though…

The point is…I took ages to do something simple, and that is
really depressing…the images from creative were like jigsaw puzzles,
I can’t write a good table to save my life and I even had to send
Yahoo! messages to Grace [pixelphobia.net] (who claims to eat HTML tables and CSS for breakfast) to ask her how to float text on top of static images…

I am still at the office and if there’s a single word that could sum up today it’s omgwtfbbq.

I really need to update my skill sets but that will have to wait, forgive me for not replying the comments today, work awaits…