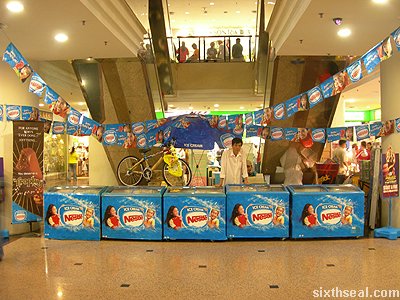 Nestle has a range of “premium” ice cream under the Trophy brand which is considered a poor man’s Magnum [sixthseal.com]. They are running a two day promotion at Wisma Sanyan in Sibu to promote the Trophy ice cream, in particular its latest strawberry flavored Trophy. 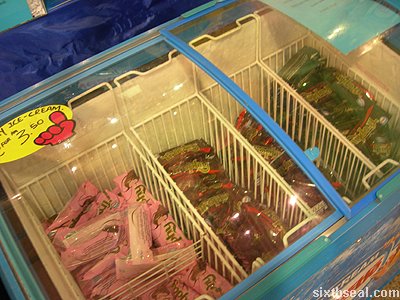 I was at the shopping mall with my gf just now and decided to get an Almond Choc Ace Trophy and the new strawberry flavored Trophy. The Trophy ice cream by Nestle is based on the concept of Magnum ice cream and comes with the cringe inducing tagline “You deserve a Trophy“. *groans* 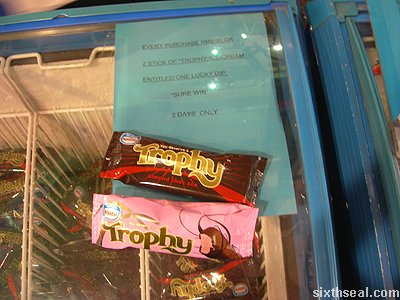 The promotion is anchored to an instant draw prize collection (or “Sure Win” as they so eloquently dub it) for every purchase of RM 5 worth of Nestle ice cream OR two Trophy ice creams. Our Trophy purchase entitles us to one “Lucky Dip”. I was so excited I nearly creamed my pants, pardon the pun. 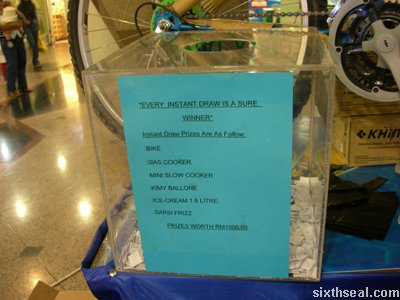 The list of prizes in the instant draw box starts from a Mountain Bike and ends with a Sarsi Frizz in descending order of monetary value. The last three items are Nestle ice cream products. The entire promotion boasts a payout amounting to the grand total of RM 1,000!!! Talk about big budget promotions! 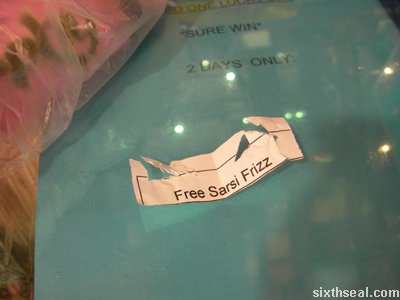 I wasn’t surprised when I stuck my hand into the “Lucky Dip” box and came up with Sarsi Frizz. The box probably has Sarsi Frizz printed on almost all of the little pieces of folded paper. It’s one of the lowest priced Nestle ice cream products – a frozen ice water stick vaguely tasting of sarsaparilla. 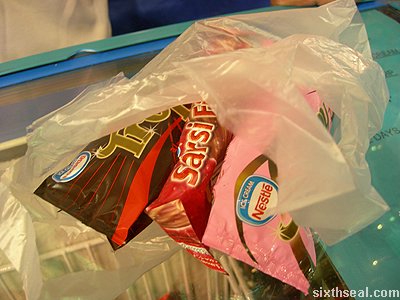 Oh well, it’s better than nothing…

P/S – My apologies about the sarcasm laden post. I just bought a Nintendo GameBoy Micro on an impulse and I can’t wait to check it out. I’m not a big fan of consoles or handhelds but it looks so amazingly small that I couldn’t help getting it. It’s cheap enough for impulsive purchases and yet packs enough value for a few hours of fun. Full review coming up soon on sixthseal.com. 🙂