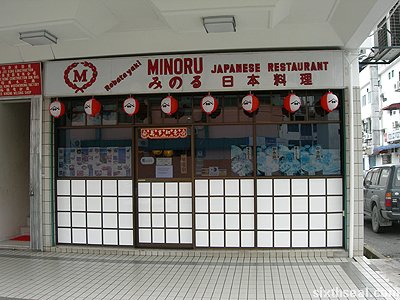 Minoru Japanese Restaurant is an authentic Japanese cuisine eating establishment in Kuching. It is supposed to be the best place to go for authentic Japanese food. It’s located in Rubber Road and it’s a cozy corner lot, relatively unknown, but a gem of a place if you find it. 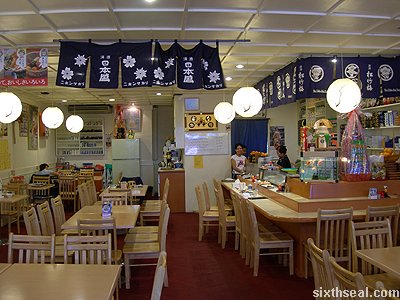 The interior of Minoru Japanese restaurant is furnished in classic Japanese decor and there are various seating arrangements to accommodate patrons as well as a sushi bar area where you can watch the sushi chef prepare the orders. 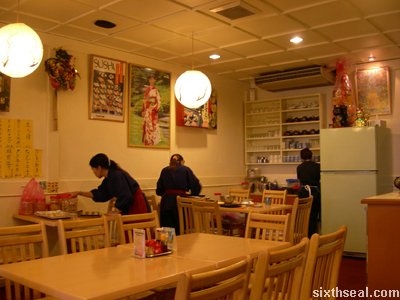 The service at Minoru Japanese restaurant is excellent – the waitresses are accommodating, friendly and attentive…probably coz we were the only ones there. 😉 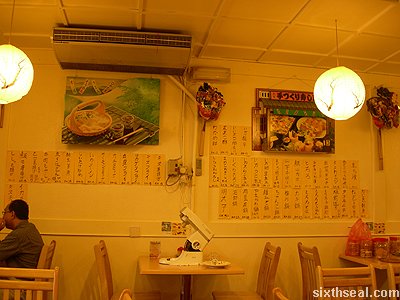 There is a menu plastered on the wall with Japanese writing which I can’t make sense of and I don’t know why it’s there since probably 0.0035% of the population here actually can read Japanese. 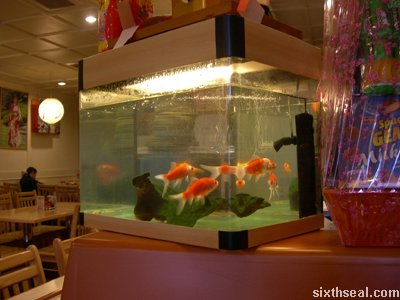 I went there with Cherie before she left for Melbourne in the afternoon and the place exudes an ambience of serenity. There is a fish tank at the bar seating area (which used to have piranhas) – it’s very tranquil, perfect for a quiet afternoon lunch. 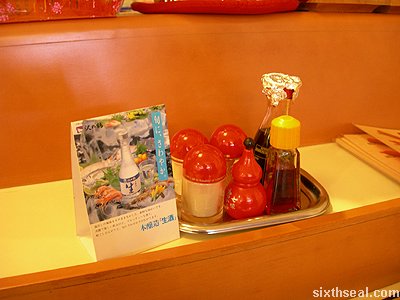 There are various condiments interspaced with sake place cards every meter or so on the bar seating area. The condiments are all imported from Japan, unlike other “Japanese” eating establishments. 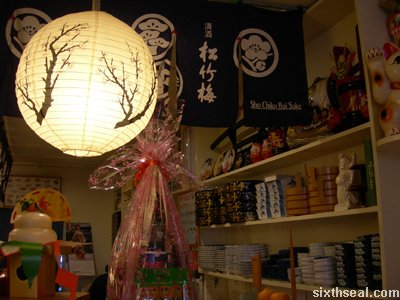 The view from the sushi bar into the area is decorated with lighted paper lanterns and the area behind it is full of Japanese paraphernalia. 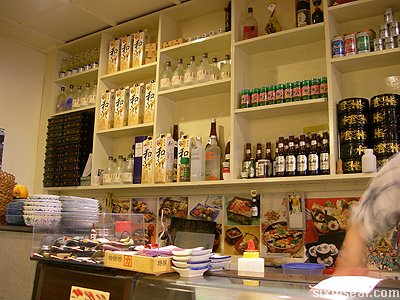 There is a wide selection of sake and shochu (including the ones in the cardboard boxes – love them) and naturally, Asahi beer in bottles, cans and mini cans. 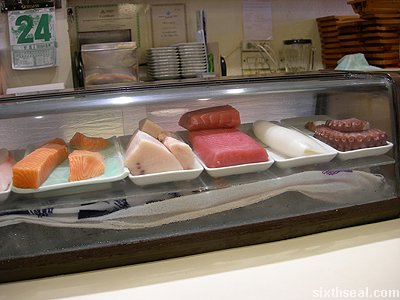 The sushi bar has a transparent glass counter at eye level with the fresh tuna and octopus as well as other provisions…all air flown in from Japan. 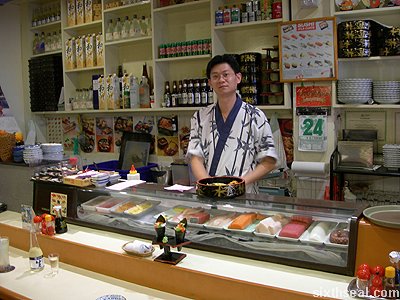 This is the sushi chef behind the counter. Minoru Japanese restaurant also serves fugu (puffer fish) but the dish is seasonal. 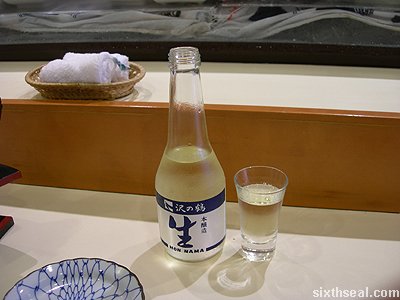 I ordered Hon Nama sake (RM 35) which can be served either at room temperature, chilled or warmed. It comes with a shot glass so I decided to take shots instead of savoring the sake coz I have an alcohol problem I didn’t want to be pretentious. 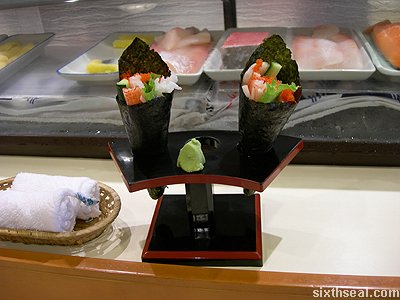 This is the California Roll (RM 20) which Cherie recommended. It’s really good! Unlike other establishments, the Temaki is filled with all sorts of premium ingredients right down to the bottom of the roll. It’s a must have if you’re going to Minoru. 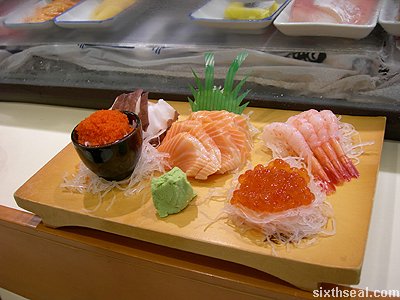 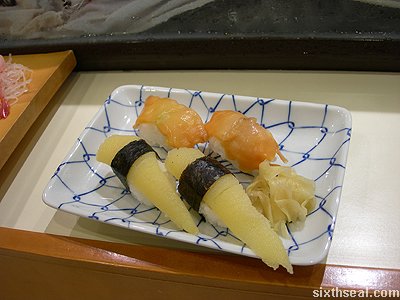 We also ordered Akagai sushi (RM 30) which is rare in Kuching. It’s fresh ark shell. The other one is Kazunoko sushi (RM 25) which is herring roe. 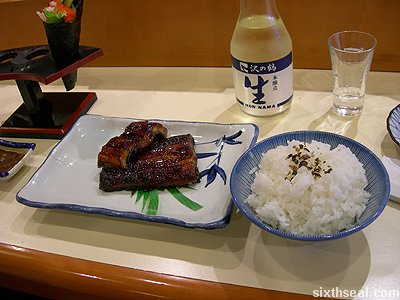 The Unagi (RM 25) with rice topped with seasoning (RM 2) tastes great as well. I can’t resist eel with rice; it’s what I used to eat in Melbourne. 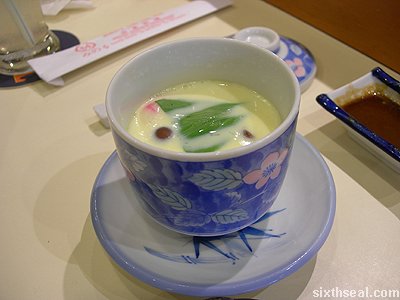 The Chawan Mushi (RM 6) in Minoru Japanese restaurant is good as well…it’s full of ingredients inside. 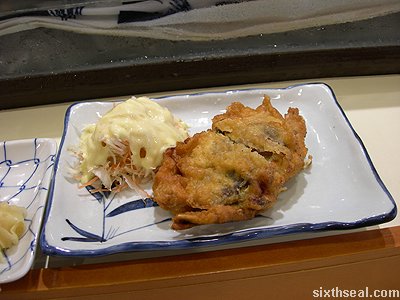 This is the soft shelled crab (RM 16) which we did not manage to finish coz it’s obvious that we ordered too much food. 🙂 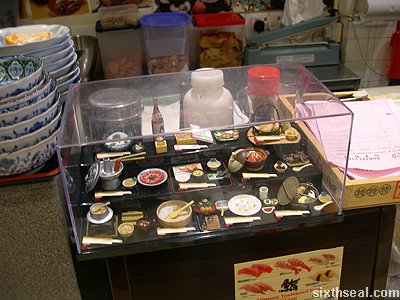 The most interesting décor in Minoru Japanese restaurant is this glass encased selection of miniature dishes that the establishment offers. The bill came to about RM 300+ which is reasonable for authentic Japanese cuisine. 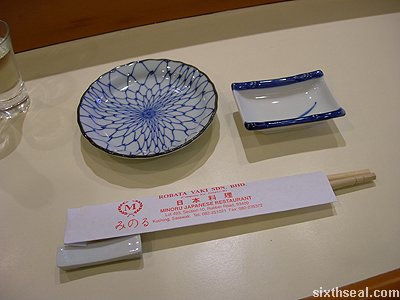