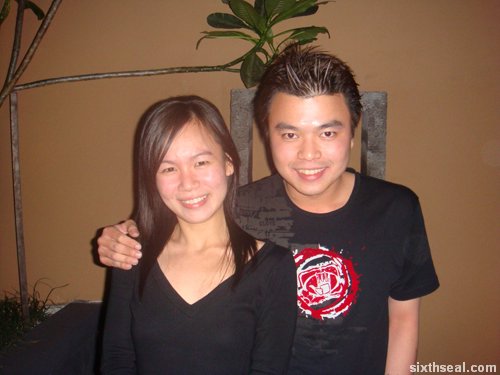 I seem to have earned (?) myself a reputation for being something of a playboy, from the feedback I have been receiving from friends and coworkers as of late. It seems that this is solely due to the amount of photos of different chicks, I’m sorry, I mean females I have on the blog. I’ve been asked not to put up certain photos from girls with boyfriends for fear of being tarred and feathered by their boyfriends and from being labeled a “sixthseal.com chick”,

I should be quick to claim that most of the girls are my friends and the arm over the shoulder thing is just a manifestation of the “buddy buddy” thing. I do it with both guys and girls, and no one comments about the male photos. I had a discussion about this with my boss just now and the case of Tony Fernandez with his arms around two flight attendants came into play.

Now, since he has his arms around them, he’s obviously fucking them, or that’s what the general public thinks (over here in this small town anyway). I think it’s nice of him to do the “chummy” thing with his cabin crew. It’s just how people look at things.

I have had a lot of comments that I must be a player due to the number of chicks that are featured on my blog, but it should be noted that most are just friends.

What do you think?