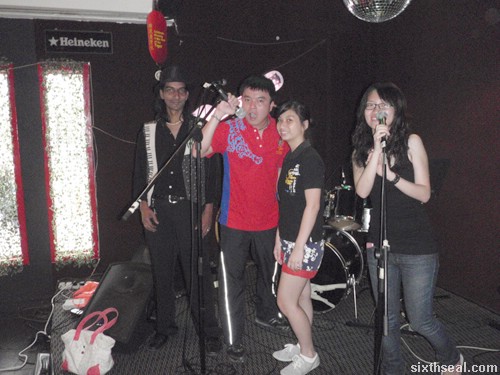 Big house, 5 cars, the rent charged? I think most guys wanted to be in a band when they were teenagers. I sure did. I grew up listening to Green Day, Rancid, Offspring, and the other OC punk scene bands. I’m a huge fan of Araya of Slayer too – he has mad bass skillz. I tried to pick up the guitar when I was 15. A friend of mine actually taught me how to play Smashing Pumpkin’s Zero (can still memorize the chords) but that’s the limit of my talent.

I thought that I’m just not musically inclined, but with hindsight I realized that I just didn’t put in enough effort. We had a band going in Christchurch (did my high school that year in NZ) but I never got to play coz I’m not good enough. However, I do enjoy the jamming sessions and I’ve always wondered how things would turn out if I really gave it the good ol’ college (or high school) try and kept practising. 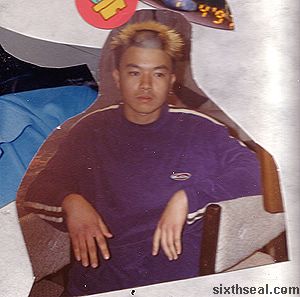 This was me back when I was 15. Damn, I look the part right? Very rocking if I may say so myself. 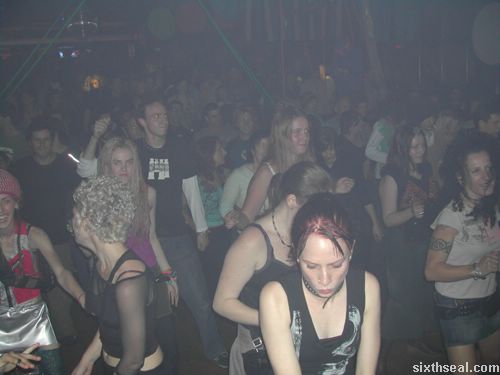 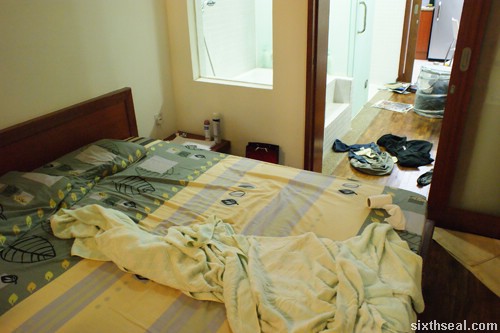 Yeah, I know a thing or two about thrashing rooms. Heh! 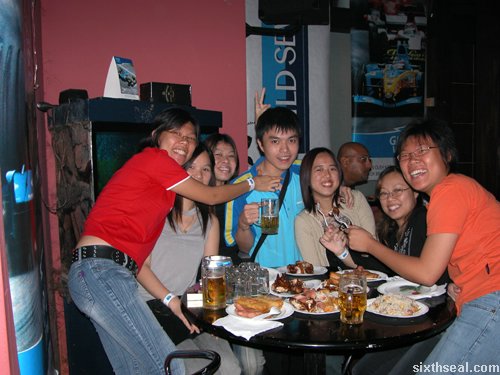 Imagine the groupies you’ll have and the fans throwing their panties at you at your concerts! Think about the ridiculous stuff you can put on your contract rider – M&Ms with all the brown ones taken out, Alaskan King Crab air flown in, Fiji mineral water and all that ludricous crap. 😉

Right. Since I’m a little too old (going to be 29 soon) to be starting a band, I can always pretend – a “what if” scenario: 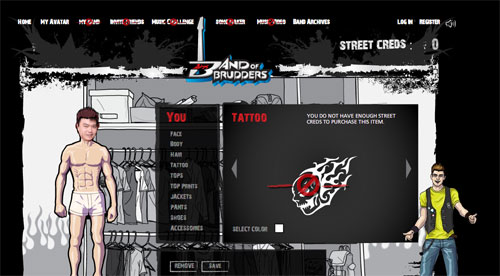 Band of Brudders allows you to indulge in your rock star fantasies by creating a band with your fans and customizing it. You start at your house and you can change your hair, body, clothes and even shoes (Jeff wears Birkenstocks).

This is not how I actually look like, I’m not that buff, it’s called “artistic liberty”. I also wanted this flaming skull tattoo but I don’t have enough Street Creds so I need to earn more. I’m nearly au natural coz I’m scared and angry, so I went to take a shower (coz that’s what people do when they’re scared and angry). 😉 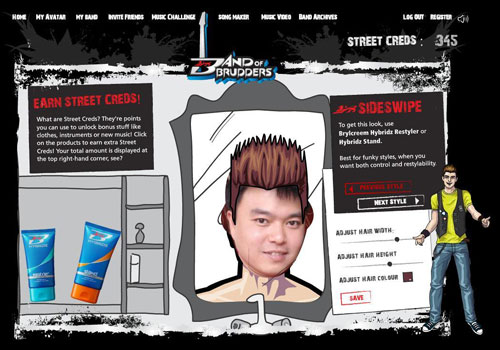 Okay, all kidding aside, I can be whoever I want to be so I’m donning a hairstyle that would probably get me a warning letter at work. 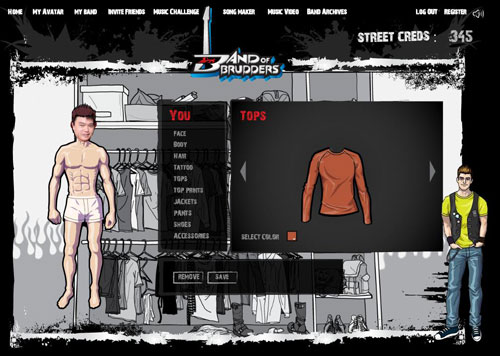 This is my virtual wardrobe! I can change everything and best of all, it never needs to be dry cleaned and it’ll never crease. I’m sure you all know about my ongoing run-ins with my laundry service. >.<

There is no ‘I’ in band – even Slash can’t form a band solo (although he tried, kinda, sorta, with his album Slash’s Snakepit) so you’ll need to invite two of your most rockin’ friends to join you in your musical endeavor.

Anyway, after all that is done you need to play the guitar, keyboard and drums before you can proceed. Now, this I can do – it’s like Dance Dance Revolution. Believe it or not, I used to play DDR at the arcades. Heh! 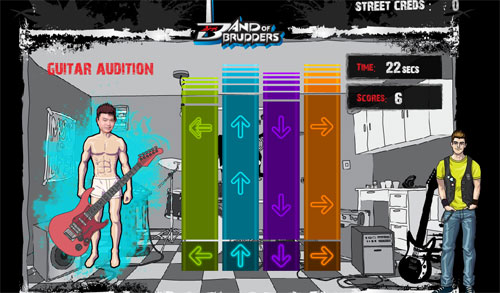 Stages are progressively unlocked as you explore the Band of Brudder site – there’s a driving game where you have to pick up your friends (use your Street Creds instead – this is a tough one), mixing your own song (downloadable as an MP3!) and making your music video (downloadable as an AVI!) until you hit the big time. 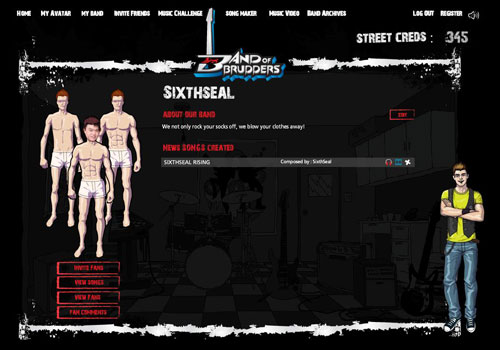 We not only rock your socks off, we blow your clothes away!

Check out my underwater music video! It’s easy to create an MV – much like Windows Movie Maker, just click and drag. We’re not wearing any clothes since it’s really hard to swim while jamming 30,000 fathoms beneath the ocean. The musical instruments still work though – like I said – artistic license! 😉 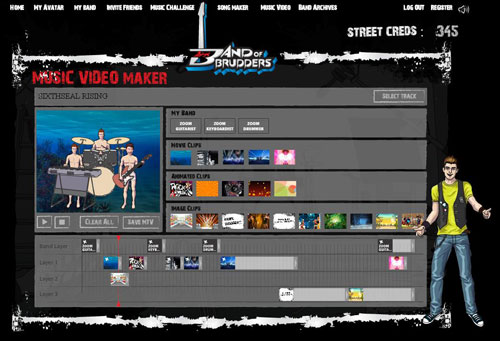 Your debut single from Tune Studio and your MTV from Spotlight Film Studio will be rated by all. Try and get to the Top 10! 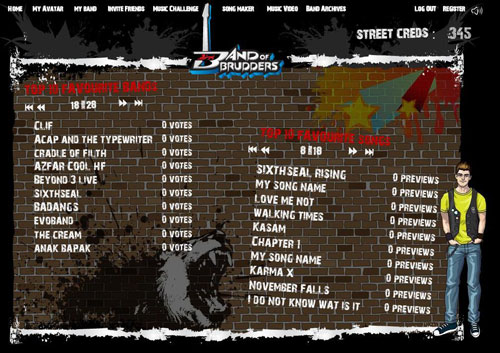 I currently have 0 votes and 0 views. WTF? Our band very 1Malaysia okay! We have a lead singer who used to have a drug problem (hey, it’s part and parcel of the rocker lifestyle!), one Kadazan female from Sarawak and a local girl! Support a bit, ya. Local artists are never going to make it big without grassroots backing. 🙂

Oh, and if you’re wondering how to earn Street Creds, it’s by clicking on the Brylcreem deodorants and facial wash! 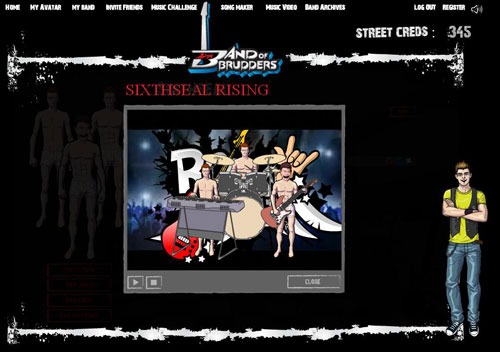 Check out my Band of Brudders (okay the other two are female – fresh026 and KaYe – but hey, equal rights and all). 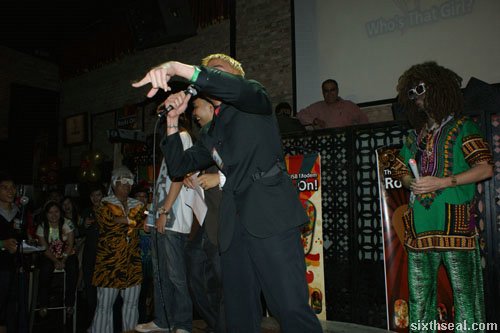 I got my first real six string, bought it at the five and a dime. Played it till my fingers bled, it was the summer of ’69.