I went to the city today to sort out the Flemington shooting range
booking. I’m going tomorrow afternoon at 2 pm straight after my last
exam. Will be keepin’ it real G style and post some photos tomorrow to
boot. 😉 Anyway, you know how Pepsi came out with Pepsi Twist? It’s
normal Pepsi with a slight lemon taste. It’s only available in KFC for
the time being. Well, I was grocery shopping at Coles the other day and
saw that Coke has something similar. I don’t know which one came out
first, but here’s the Coke version:

I prefer the Coke version. Pepsi tastes too sweet to be thirst quenching
unless its watered down with ice cubes. Diet coke is my drink of choice.
Anyway, I’ve noticed that the KFC chicken here are absolutely miniscule.
The drumsticks are half the size of the Malaysian counterpart, if that.
It’s only slightly bigger than the Ayamas frozen mini drumsticks. While
having 3 pieces of chicken will make me feel bloated in KFC Malaysia, here
it just made me feel slightly full. And that’s the ultimate 3 piece meal
with the Picnic bar, bun, fries and mashed potatoes. 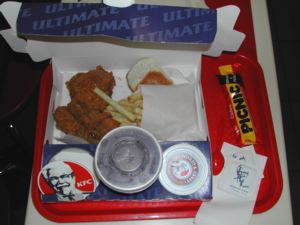 Well, I took a lot of pictures while I was in the city today. I’ve been
getting the dreaded “System Error” that plagues most Nikon digicams. I
figured out that it only happens when the zoom lens have not been
retracted properly for some reason. The remedy is to manually push (not
too hard) on the zoom lens, so that it is ‘docked’ again. You shouldn’t
touch the actual lens with your fingers, just apply pressure on the side
if you have this problem. Anyway, I’ve been doing a bit of gadget shopping
too. I went the the really cheap computer hardware place opposite
Melbourne Central. Picked up a

Surecom self powered 4-Port USB Hub EP-1004P for A$45. I saw this
Wacom tablet going for slightly over A$100. I don’t draw, but I felt a
nearly uncontrollable compulsion to buy it. Just because. Good thing I
walked out of the store before I did. Heh. I did notice that the first
thing that the Quick Start booklet of the scanner says is “Scanning of
certain documents, such as bank notes (snip) may be prohibited by law and
may result in criminal and/or civil liability”. Oh? I had already scanned
a crinkly 50 dollar bill and was about to post it with some quip about
printing it but on second thought, that might not be a good idea.

Anyway, here’s a complement to yesterday’s POTD. I found this today while walking
to the bus loop.

Rumble of the Peters: A 3-Way, all out, no holds barred, “no need
to keep the dinner warm honey, coz I ain’t coming back” cage match. 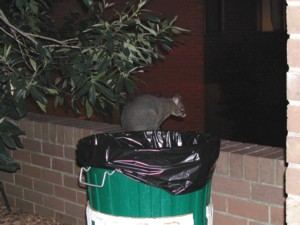 Generally regarded as the crowd favorite, this little critter can run fast
and has pretty sharp claws to boot. 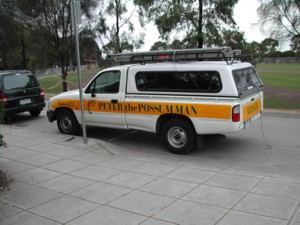 Not much is known about this bloke, but I hear he catches possums for a
living.

Because of the speed his vehicle is capable of, there are no known
photographs of this menace to the roads. Question mark picture taken from
CRpuzzles [crpuzzles.com]. 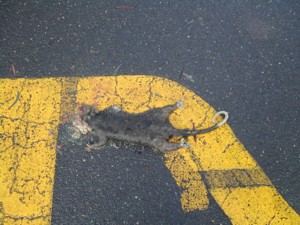 Peter the Speed Racer Wins! (with a total knock out)