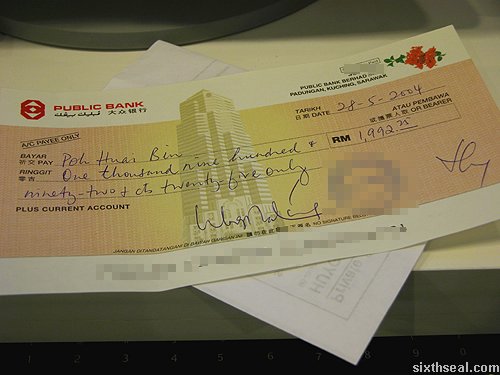 I have just received my paycheck for May – the fattest legitimate
check I’ve ever received, at RM 1,992.25, I’m pretty happy about it, specially because the company uses the best check printing and mailing services. Yes, this is the monthly
sixthseal.com financial transparency post again. 😉 Anyway, my salary
is RM 2,200 (just got a RM 200 pay increase) but to understand the
culling that occurs before you receive your check, there are three
concepts that you need to understand – EPF, SOCSO and the obscure SPT.

EPF is a “forced savings” scheme which is mandatory for all
Malaysian employers and employees. Basically, a certain percent of your
monthly paycheck goes into this fund. The current employee contribution
is 9% though that will change back to 11% in a couple of months. The
employer contribution is 11%.

SPT is the tax that’s calculated after the net pay. Thus, I
sharpened my math skillz (which is only done on rare occasions, like
during paycheck calculations ;)) and figured out the deductions.
Actually, I didn’t have to, since the pay slip states it out pretty
clearly.

That’s not the end of it either. Going back to the final tax,
there’s another little known levy for certain employees called the
Special Pleasures Tax (SPT).

The few and frugal amongst us, who considers the bottom line as fun
however, is lucky enough to call it the Savings Premium Tax (SPT),
which goes back into their account and collects interest.

What is my SPT? It’s called the Shimmering Prism Tax (SPT), which is amongst the highest levies of them all. 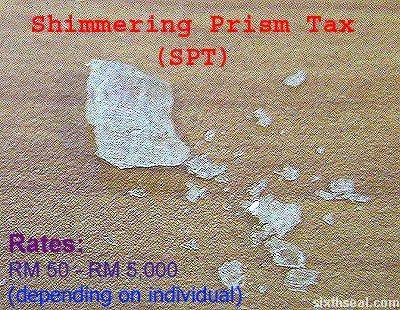 I’m not going to tell you how much the Shimmering Prism Tax costs,
but it’s a shocker when you sit down and think about it. It’s quite
sobering, really…I’m going to slowly opt out of it now…

It’s one fuck of a tax, this SPT. It’s no wonder some call it the Super Powerful Tax (SPT).

So…what is your SPT?