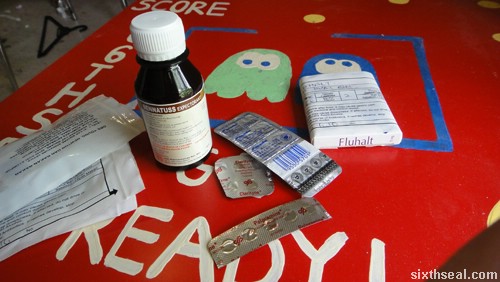 I’m currently coughing my lungs out, running a fever and feeling like crap due to this flu that I caught. It’s a good thing I followed my doctor’s orders and did not fly to Melbourne coz:

1. I might get quarantined (which won’t be fun)
2. This is just going to get worse (and she was right)

That was just the start of the flu, it’s been getting worse since then. I can’t eat anything coz I have no appetite and I’ll just throw it back up and my body aches everywhere – even in places I didn’t know exist! 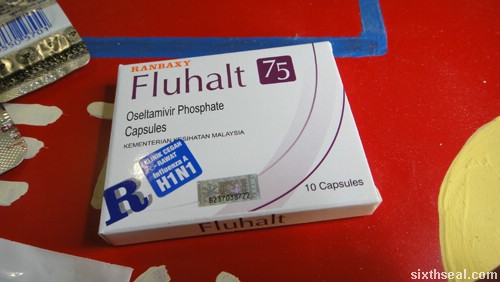 I’m also being prescribed Tamiflu (generic oseltamivir made by Ranbaxy called FluHalt) as a precaution against H1N1. Photo taken using Sony Cyber-shot TX-5. I like this one, even though it makes me nauseous, it really helps in the body aches.

I hope I don’t have H1N1 though – that’s like so passe. It would be interesting if I was Patient Zero in a new influenza subtype from rats (kinda like the black death) from my rodent eating activities. 90% mortality rate and all that. Now that would be something new.

I flew back to Sibu on Saturday and was surprised to see the sheer amount of people donning masks at the airport. I presume this is to avoid getting infected with H1N1 but I find the lack of basic knowledge about the efficacy of face masks appalling.

You can’t prevent someone from passing H1N1 to you by wearing these. They are perfectly healthy people, mind. It’s more about not transmitting it to others by containing particles when you sneeze or cough.

Either way, it’s the wrong kind of mask. This kind won’t make an iota of difference.