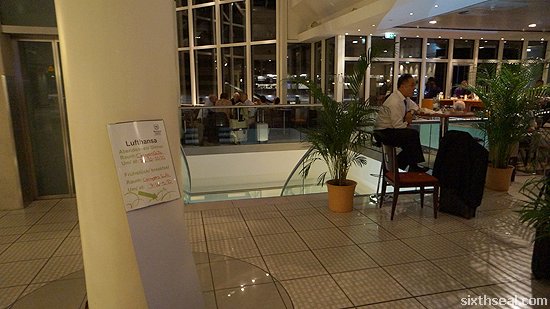 This is quite a funny story. Not LOLOL funny but an interesting experience coz I like to take things in stride and things like this happen. I had a flight cancelled due to fog in Melbourne when I was in uni. Hey, it’s an adventure to me. 🙂 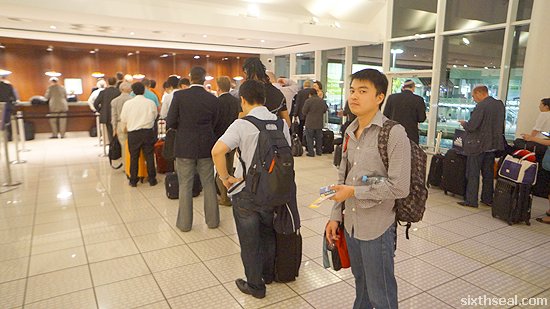 Everyone boarded an hour ago but we could not take off – at least we got updates from the Euro 2012 Germany-Italy semi-finals match from the pilot, sorry for your loss Deutschland, I supported your team…coz we were in your country and it’s a fine one. Heh.

Anyway, when we finally managed to get airborne, we ended up taxiing above Frankfurt coz there was a sudden influx of inbound and outbound air traffic. That’s when we knew we couldn’t make the connecting flight to Bangkok…and sure enough, we only landed way after that flight has departed. 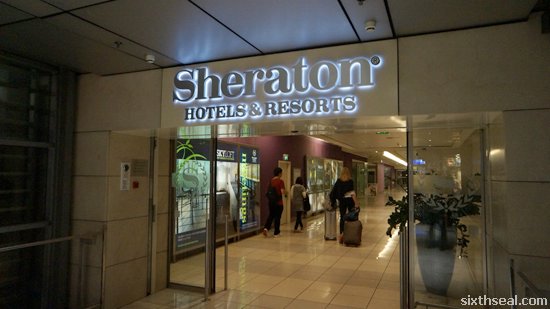 Lufthansa issued us a free night’s stay at Sheraton Frankfurt Airport Hotel and 30 Euros in “credit” which turned out to be dinner. This is dinner: 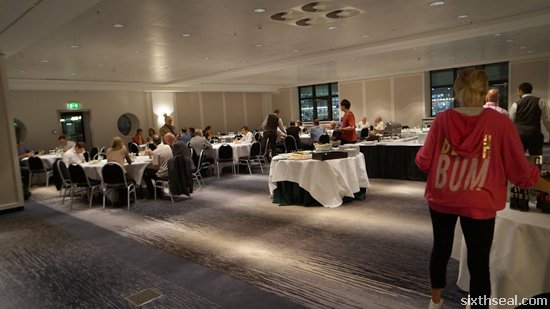 There were heaps of people trying to get on a flight – any flight – so one of the staff advised us to get some rest and come back the next day. There were over 200 people on the waiting list after midnight! Thanks for queuing up and checking Nigel! 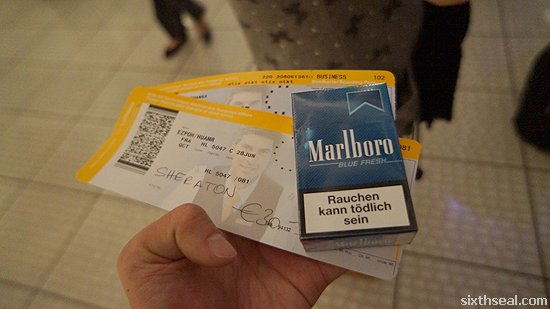 I had packed my cigarettes into my check-in baggage so I had to get another at the airport – it’s 5 Euros, which is almost double our price, but with a long flight ahead and no bookings yet, you gotta have that nicotine hit. 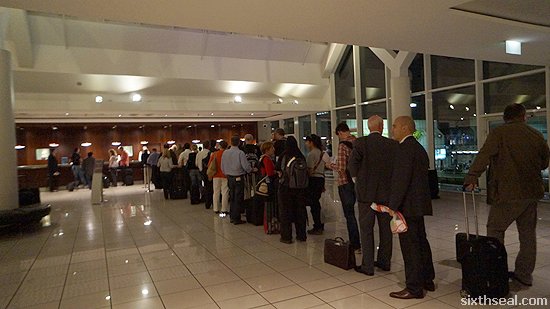 We went to the hotel and found out that the queue there was quite impressive too. This is where all the cabin attendants stay – it’s connected to the airport so that was good. The queue was still there after we finished dinner. Mind, this is only the Business and First class people so imagine how many people in total which was affected.

I had my notebook and bought 24 hours of WiFi from Sheraton for 19 Euros (about RM 76) using my credit card. I didn’t know how long I would need to wait, and I ended up wasting it coz I crashed at 2 am and woke up at 4 am to go line up at the airport. Oh well. 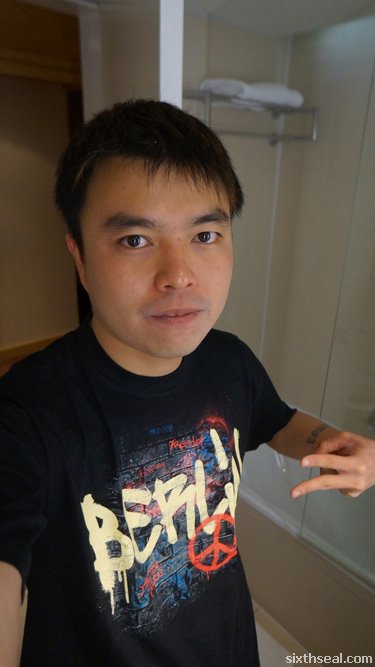 It’s a good thing I had a souvenir t-shirt of the Berlin Wall so I could change my shirt at least before heading to the airport. I didn’t even unpack coz I fell asleep after the long flight delays. 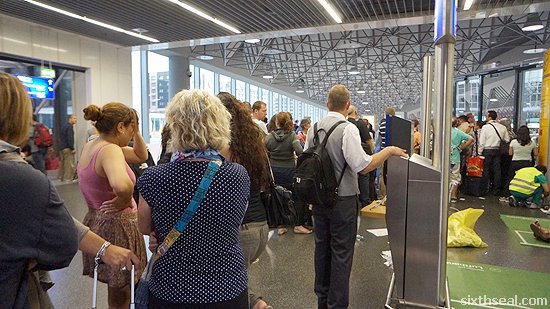 I waited in line for hours before one of the Lufthansa staff saw my ticket and brought me down. I managed to get a confirmed ticket – a husband and wife team with us went through India at 12 pm and Nigel also managed to get the 3 pm flight that I was on. 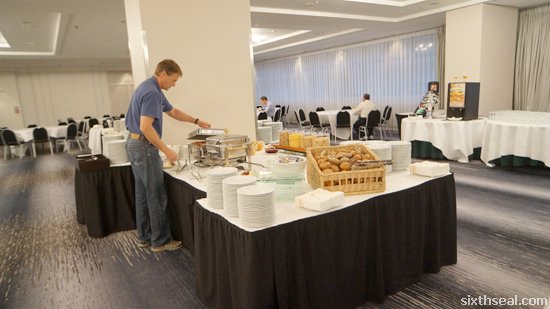 The reason for splitting up is due to the sheer amount of stranded passengers so we couldn’t stay together. There just wasn’t enough seats. The grounding of the Frankfurt airport really affected a lot of people – several thousand people stayed at the airport (Economy) or the Sheraton in Frankfurt (Business and First). 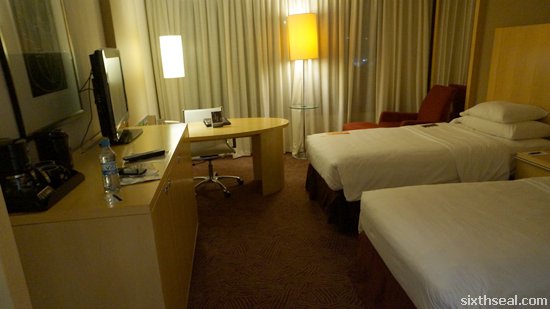 You know what the worst thing was? No one could retrieve their check-in baggage! There’s a rule that it has to stay at the airport or something to that effect. I’m pretty sure I’ve broken the record for wearing the same underwear, jeans, socks and shoes. I could only change my shirt. I can smell myself from 200 meters away. Heh.

I’m also staying awake on willpower and coffee alone. I’ve drank more than 15 cups in the past 24 hours. 😡

I’ll have to wait for a while before I’ll know if my flight back to KL later is 100% confirmed. I’m the only one left here coz there were just too many people needing to fly to various parts of the world.

It’s a good thing the Thai Airways Royal Lounge in Bangkok has a shower room so I could use their fresh, fluffy, wrapped towels and brush my teeth and freshen up. 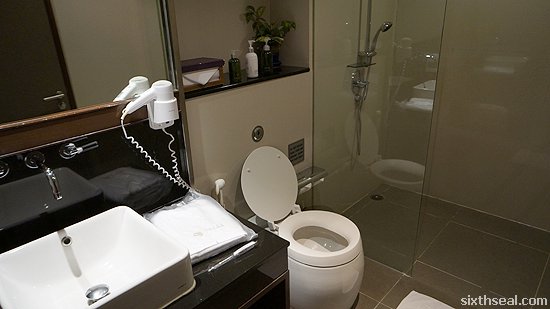 Thanks for booking us on Business Class, Volkswagen Malaysia – that really helps when stuff like this happens. 😀

I’m still wearing the same clothes from several days ago (except for the t-shirt) but that shower really freshened me up. I can semi-write coherently while being extremely sleep deprived. Heh.

Now, I shall go back and check if my outbound flight is confirmed. I need to go back today. I don’t even know what “50% confirmed” means. *shrugs* 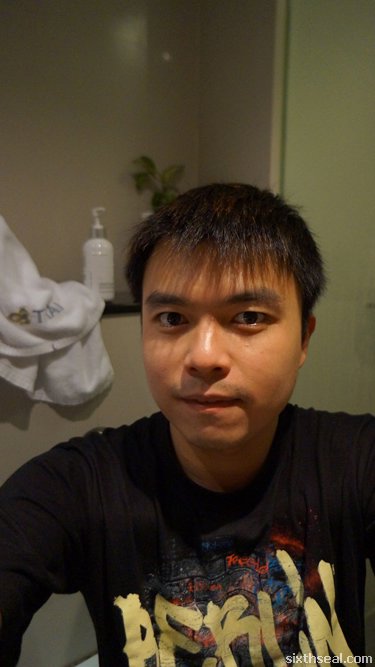 I have finally arrived in Sibu at 10:10 am today. I couldn’t take the
Sunday flight out coz the fog grounded all of the incoming planes, which
were routed to Sydney. After a 2 hour wait, the airport cancelled all
remaining flights and put us up at the
Rydges with dinner and breakfast
vouchers and a cabcharge coupon (lets you get on a cab for free). The
hotel is in corner Exhibition St. and Lt. Bourke Street. Right in the
middle of the city…I would have thought they will put us up at the
Hilton opposite the airport. Heh. Rydges is not a bad hotel nevertheless,
I think its a layby hotel for cabin crew coz there are heaps of them
walking around. I got a suite with a king sized bed all to myself. Not bad
at all, although I would have preferred to fly out on Sunday. Well, there
were two flights out of Melbourne on Monday, the 3 pm and the 11:50 pm.
The MAS people said they will try their best to put us on one of those two
flights. I didn’t get to go on the 3pm coz I have a connecting flight that
couldn’t be made with the 3pm, so they assigned me to the 11:50 pm one. Oh
well. I didn’t do much though, just slept through the night and woke up at
9:30 am to line up at the MAS counter and grabbed some breakfast after
that. I slept most of the afternoon as well. Heh. MAS paid for two nights
at the hotel, but I had to check out at 9 pm to catch my flight back. The
flight was overbooked so good thing I was there earlier. Anyway, I
couldn’t get the pics up coz I don’t have image editing software at my
home computer. Will pick up a warez CD of Photoshop on my way back later.
Feeling tired now…nearly had an accident just now too. Those damn brakes
need to be changed.