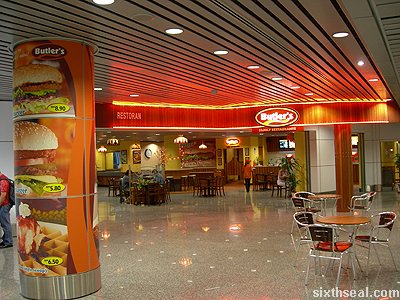 Butler’s Family Restaurants (with an ‘s’
apparently) is located near the arrival hall of KLIA (Malaysia’s
international airport). My flight arrived one hour early and Air Asia
does not serve meals on their flights so I decided to grab some
breakfast here before I head out of the airport. I’ve passed by
Butler’s Family Restaurant more than a few times but never did feel the
urge to sample their food offerings. 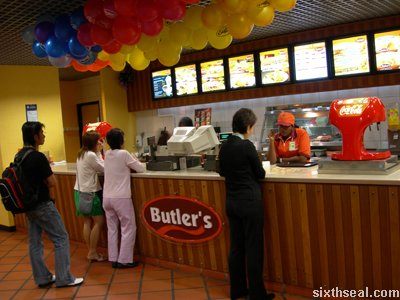 Butler’s was not exactly bristling with patrons when I walked in. In
fact, I’ve never seen the place even partially full in all my flights
through KLIA. Nevertheless, I was undeterred by the lack of clientele
and ordered from the breakfast menu. Butler’s Family Restaurant serves
breakfast from 5 am – 11 am. 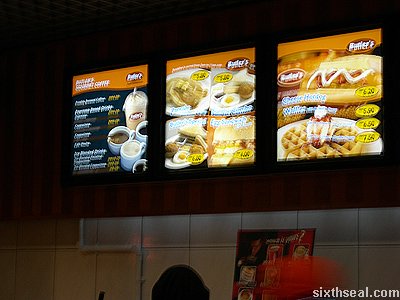 I had the Butler’s Special (RM 6.80) which took ages to arrive
because (and I quote) “the order number was obscured by your notebook,
so we didn’t know you still have outstanding orders”. No apologies,
just a matter of fact statement. I told her that I could count the
number of people in Butler’s on the fingers of one hand, and I couldn’t
understand how an order could be missed. She just reiterated the
obscured order number and told me it’s on the way and left.

I don’t know where they hire these people, but they should not be in
customer service. I had not had my morning coffee yet (and that’s not a
good thing), so I walked over to the counter and asked for the manager,
who apologized for the waitress. I was pretty irate though, and the
manager probably sensed this, and offered me a drink while I wait for
the Butler’s Special to be served. Thus, I had coffee on the house, and
all is forgiven. 😉 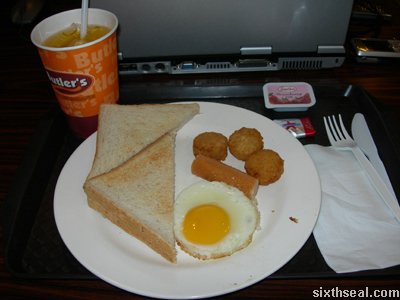 The less-than-stellar service aside, I can’t recommend this eating establishment with a good conscience though. Butler’s Special
isn’t anything special at all…the dish comprises of a sunny side up
egg, hash browns, a sausage, toasted bread, butter and jam. It was
supposed to have a muffin as well, which the waitress forgot and made
me have to go back again. I don’t like having to make so many return
trips just to get food and I made that very clear when I went for my
muffin.

The muffin wasn’t even good…it was dry and stale…

I appreciate the manager’s efforts to make things right, but the
food is deplorable and the service non-existent, so please, if you
happen to pass by Butler’s Family Restaurant in KLIA – keep walking! 😉