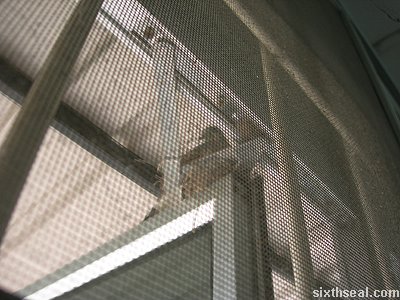 There is a bird nesting outside my window again. I know it’s nesting coz it’s been sitting there on top of its eggs for several days now. It did gave me a look of alarm (at least, that’s what I think a bird would like when alarmed) when I stepped up and took a photo of it behind the screen.

This bird has been making me sick (not figuratively, literally!) since it’s perching on top of where I sleep. I received a lot of flak when I removed its nest (though in all likelihood it’s not the same bird, just the same species) in Season I [sixthseal.com] but I wonder, given the H5N1 avian flu and all that, would I receive the same barrage of disapproval this time?