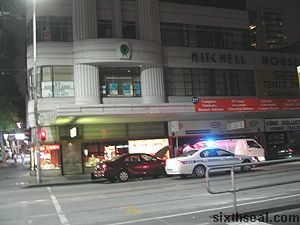 I just came back from Moomba. Saw this while crossing the road on
Swanston Street. There was this police car beside a red car and an
Asian family were talking to the police. The red car seems to be
their’s and apparently someone removed the whole front bumper of their
car and put it by the side of the road on the sidewalk! 🙂 It looked so
funny, so I snapped a photo of it. It’s a pity for the folks it
happened to though. Hmm, there seems to be a higher than usual police
presence in the city, probably due to the Formula 1 and the Moomba
Festival. Well, I’m going to write about Karen’s birthday @ Dion first
and then Moomba so expect those later in the night. Meanwhile, look at
these photos. Not something you see everyday. 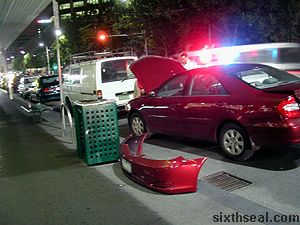