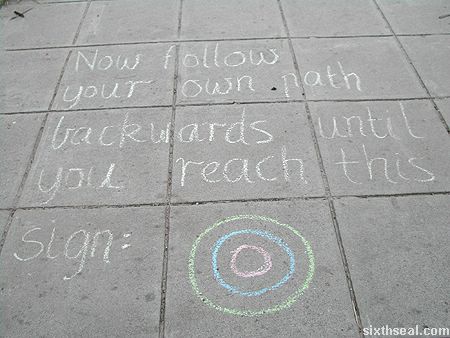 I saw this ad on the floor while walking on the Clayton campus
today. It’s for the regular poster sales they have at the campus
center. Very enigmatic…

Anyway, I just got a call from an Optus representative offering to
upgrade my phone set. It sounded good until he mentioned the 24 month
contract. I told him there’s no way I can do that, coz I’m graduating
in June. Well, he said I’m due for an upgrade (probably part of their
new customer service to reduce churn) and offered me A$11 free call
credits per month for 12 months. There’s a catch though, if I leave
within 12 months, I have to pay A$55 and even my poor math skillz tells
me that’s not good value considering the fact that I’m graduating in
June. Okay, their anti-churn techniques are very sneaky indeed. Oh, and
churn is the industry term for customers switching over to a
competitor’s network. Now, I bargained for a 6 month term of A$22
credits but of course he couldn’t make that happen. Haha! I pushed for
the ‘yes’AnyPhone plan, which I really want to get on coz of the 30
cents for 10 minutes calls to landlines and mobiles. It’s very useful
when using a calling card at night. Unfortunately, that requires me to
change my plan to a A$55 dollar a month one, with A$55 call credits. It
sounded okay at first, but wait, being on that plan will increase my 30
second charges by 6 cents. Of course I declined. Oh yeah, something
funny happened at this point. The rep was looking at my details and he
was wondering how I got on a government plan. Heh! My current plan has
really cheap per minute rates and it’s charged every 30 seconds (more
cost effective) and I need to pay for usage only, so it’s not actually
a plan. He puzzled over it and asked me how I got on this rate which is
meant for loyal customers in the government and large organizations.
Well, to tell you the truth, I don’t know. I stopped pushing for
upgrades after that, none of them sounded appealing to me. I also don’t
want to lose my current rates, although it’s very possible that the
reason I’m getting these rates is due to a mistake on Optus’s part. I’m
already on a loyalty government plan with cheap per minute rates? I
don’t mind at all. 😉