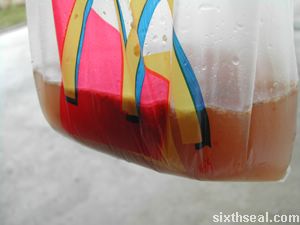 Pictured above is a plastic bag containing a portion of the things I
regurgitated today. There is another fat, dark plastic bag inside (at
the final bag below)…that’s also full of vomit. If you look hard enough
you can see a half eaten Fish Filet from McDonald’s (ate there again
for the Sega mini handheld game promo – got two, whee!). I could not
eat anything the whole day and drinking water only made me regurgitate
seconds later. It’s quite tiring really, all that throwing up business.
Especially when you vomited everything from your stomach – I was
basically making uncontrolled dry heaves. 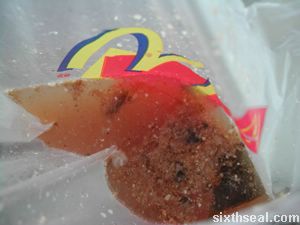 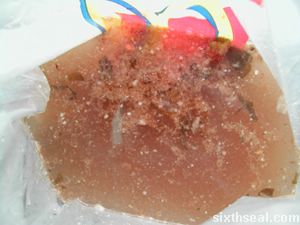 Another close up of the bag of puke. 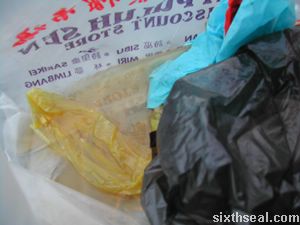 The final big bag of puke. Note the yellow transparent color at the
bottom – I didn’t have anything else to throw up so up came the stomach
acids…

Anyway, I went to see a doctor just now and specifically asked for
an anti-emetic injection – which usually prompts “Oh, so you’re a med
school student”. It seems that a lot of the doctors here assume that
only med students know those words. I use medical terminology not to
sound pretentious – just to be concise. Anyway, out came the nurse and
told me to lie down. I declined and asked for it in the arm because I
wanted to take a photo of it. Unfortunately, that nurse is faster than
a speeding bullet – my digicam barely went through its start up
procedures before she was done. In and out in a second. Bummer. Anyway
it was an IM (intramuscular) injection that only left a tiny red mark: 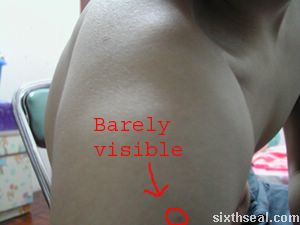 But this nurse is truly fucking clueless and the doctor was looking
the whole time and didn’t make any comments so he’s fucking clueless by
proxy too. The nurse didn’t swab me! This is such a basic
hygiene method employed even by IV drug users that one would expect a
GP to know, but apparently not. Hmm…are there any lawyers out there? If
I get septicemia, endocarditis or something like that, am I eligible to
file a lawsuit? Of course, if (a very big if) something happens
and the courts decide in my favor, I will keep half of the profit, some
will be used to run a contest on sixthseal.com, and I’ll donate the
rest to a good harm reduction organization. Hehe! Seriously though,
some HR organizations are tax deductible, so it would be good to do it,
if you support the idea behind it that is. 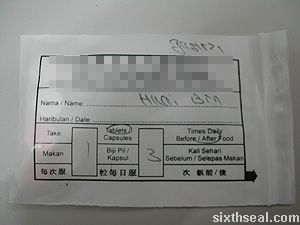 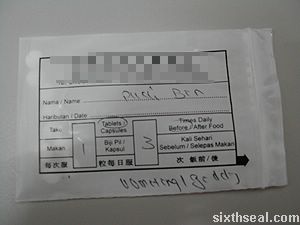 Well, here are photos of the medication I received – one is supposed
to be an anti-emetic, while the other is for gastric. True to the
practice of most of the doctors here, the actual name of the drug is
not written, only what it’s for (the symptoms). It’s coz we patients
are stupid you see, we’ll never understand and know what it is, if they
wrote the name of the drug instead. Anyway, now I have to search RxList
and see what it is, which would be pretty damn difficult as one of them
has no detail, just a single score. 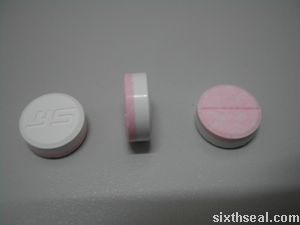 “Gastric” pills
YS imprint on the front, single score on the back, beveled edges on
both sides. 1/4 of the pill is pink while 3/4 is white. It smells like
candy. 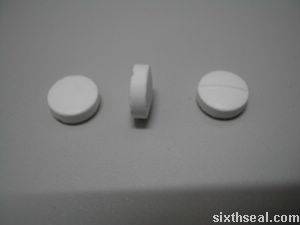 “Vomiting/Giddy” pills
Single score on back, no detail on the front. Plain white tablet without beveled edges.

Well, I’m sure that they don’t have any recreational value (unless
stopping you from vomiting counts, heh) but it would be interesting to
know what they contain anyway, just in case it’s contraindicated
against something I’m taking in tandem. Oh, you want to know something
interesting? The pills labeled “gastric” looks a like like this (except
for the color):

I just got back from dinner, I’ll make a couple of posts and reply all the comments in a while.