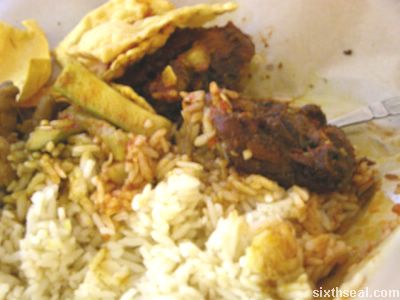 I went to take away some chicken rice just now and somehow got
breast meat in addition to the drumstick I requested. I don’t even like
breast meat. The incident happened when I squeezed through to the
cashier’s place. To do that, you had to go through the existing queue
for chicken rice. “Excuse me!” I said, and lifted my hands to utilize
the “wedge yourself through by force” technique and got to the
cashier’s. I started pulling out RM 1 bills from my wallet, when
suddenly, I felt someone staring at me. She was wearing office attire,
probably mid twenties, with…well, decent (for the lack of a better
word) assets for someone of her physical build.

The realization dawned upon me that in my attempts to navigate the
human maze in the cafeteria, I had inadvertently initiated
inappropriate physical contact between my left hand and the
abovementioned person’s mammary appendages for about 3 seconds. I
realized that my outer left hand had slid across the chest area of the
unfortunately positioned woman, thus affecting not just one, but both of the extrusions in question.

It must not have seemed like an accident to her, because the look on
her face could only be described as “consternation”. It wasn’t
“appalled”, thank goodness, nor was it “shocked”, just mere
“consternation”, with an unasked question hanging above her head.
“Sorry, I didn’t mean to do that”, said I. “No, no, it’s okay”, said
she.

However, I noticed that she had her arms firmly crossed against her
breasts when I was about to exit the area, presumably to avoid a repeat
of the previous incident.

I walked out behind her, just in case. 🙂