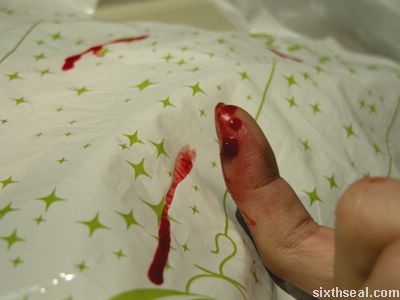 Okay, I had this big bag of trash with me when I came into work
today. When I say big, I mean huge. The plastic could hold one man
quite comfortably, if he’s willing to go into the fetal position.
Whether it’ll hold his weight or not is another matter, but I
digress. Anyway, this bag had 4 smaller bags inside, all filled with
trash. Don’t ask me why, some thrash is private you know…

Back to the bags of fun, I opened the big bag and stuffed the first
of the smaller bags into the DBKL garbage cans opposite the building
where I work. This one went in relatively easy since it’s one of the
smaller ones. I went to the next one and shoved the bag into the can.
If you’ve seen one of these things, you’ll notice that it’s no mean
feat – the holes are very small…

All is good though, two down, two to go. I crossed the street and
went to one of the cans further away and jammed one of the large ones
into the trash can. It wouldn’t go in. A homeless man looked at me
greedily, probably to see what it was I stuffed down. I don’t want
anyone prying into my trash so I glared at him and went to the next can.

I stuffed it in. It wouldn’t budge. I used brute force to jam it in,
and it slowly…gave…way…and then I noticed that I seem to have a
laceration somewhere because I could feel blood dripping. No, that’s
not good. I’m already dehydrated, I need ALL the blood I have or I’ll
probably pengsan [pengsan.com].

No, I didn’t just pimp that site for fun. Er…maybe I did, but
anyway, I realized all too late that the particular bag I was trying to
get rid of is the one that contains Sharp Things. Anyway, I was pretty
pissed at it by this time and really jammed it in…and gave myself
another cut. Not to worry though, the Sharp Things are mine and at no
point did the laceration or Sharp Things come into contact with the
thrash can’s germ filled side.

However, I naturally did not appreciate being given a subcutaneous
incision for no good reason, especially when I’m dehydrated. But at
least that’s 3/4. I looked at plastic bag #4. It’ll never fit in, it’s
physically impossible. Well…yours truly isn’t exactly stupid, so I
took plastic bag #4 out and emptied most of it’s contents into the
original giant plastic bag and stuffed THAT into the next garbage can.

Actually, a single sentence does not do the act justice. There were
plenty of grunts, maneuvering, crude levers, back support, standing
back and analyzing with the little pats here and little ruffles there
method to make it go in. It took about 5 minutes and 10 profanities
before it was finally in. If anyone had seen me then, it must have
looked like I was humping the DBKL garbage cans. That’s the effort I
had to make to stuff it in – by giving it a counter weight on the other
side.

Now there’s this last one, it’s a Myers bag, festively decorated,
not too dodgy except for the blood stains, so I took that into the
office. I unlocked the door and was confounded with a problem…my
right index finger is bleeding. My right index finger is the one I use
to authenticate myself with the biometrics scanner. I didn’t want to
authenticate myself with an open wound, in the interests of my fellow
coworkers.

No, I don’t have any dangerous pathogens. I just have a high level
of civic consciousness. Oh, and also, doing that would introduce
bacteria and other nasties into my wound. 😉 It’s bad to touch anything
with an open laceration, especially for hypochondriacs like me. All is
not lost though – I remember my thumb (which was clean) was another one
that I could authenticate with. It just never did work for me before
though…

I tried anyway. Nope. Nope. Verified! That’s just on the third try –
praise the Lord! 🙂 I went in and took a photo of my finger and then
went out to dispose of the final bag. This was one of the bags that
have an open, unsealable top. I noticed something that should have been
in my backpack – a bank draft for RM 2000 from one of my bank accounts
in Kuching, which I never got around to transferring to my main one.

There you go, a little anti-climatic, granted, but that’s how my cut
finger saved me RM 2000. I went to wash my finger and wanted to put a
Band Aid around it, except I wouldn’t be able to authenticate after
that, so I just wrapped a clean tissue and used my thumb (which worked
again – whee!) to get in.