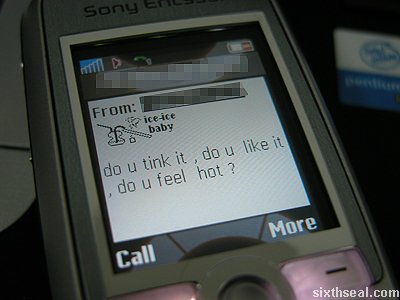 It started out as a plan. I would make full use of the public
holiday and stay up to write a flurry of posts for the blog, which has
been somewhat neglected this week coz I had a lot of work to do. I had
come up with ideas, great ideas! (well, it sounded good at that time).

I would first give the readers a sampling of the more bizarre SMS’s
I’ve gotten (with the sender’s number taken off for privacy, of
course)….

…followed by a BK post, the Melbourne convocation series I never finished (!!!), and perhaps even a food review if I had the time.

There was going to be a planned avalanche of the written word. It would be post-o-mania! 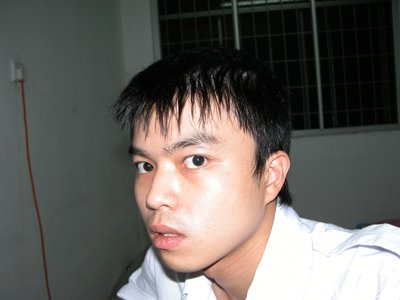 Hey, I look up too the task, don’t I? Hell, I was fucking set for 12 full hours of writing!

Right. The windows on my place…it’s…hmm…quite…well…sturdy, yeah, that’s it, I meant to say that the windows are really quite sturdy, with grates across to boot! You know, gotta keep people out and all that… 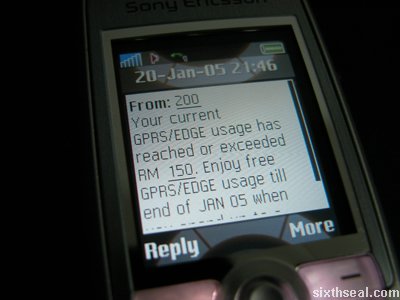 Going back to the original thread, I could justify a push for the
maximum monthly RM 199 monthly Digi prepaid GPRS ceiling charges. I’m
already at RM 150 (got the RM 100 usage notice two days ago) point and
there’s still 10 days left in January. It’ll be good, since I just got
a RM 80 (eighty dollars – the highest I’ve ever received!) bonus credit
payout from the Oct-Dec 2004 reload period, so I can piggyback on that.

Great, now you’ve got me thinking about how I reloaded an average of
RM 266 each month without realizing it. The Digi prepaid reload loyalty
program credits back 10% of the total value of credits purchased and
used in each quarter by the customer (me). It’s a great way to keep churn rates low, IMHO!

I, for one, welcome our new demon-worshipping,
blood-sucking, customer-behavior-pattern-model-analysis-exploiting
telecommunication overlords!

Oh, I remember now…I’ll just extrapolate and from the past 24 hours…

I bought a RM 100 prepaid 016 (Digi) card and topped up my credit
yesterday afternoon. The credit balance seems to have been mysteriously
truncated into a single digit. I dare not let my thoughts dwell too
long on what manner of evil is capable of making two figures disappear a scant two days after I loaded another RM 100 reload card.

It simply wouldn’t bode well for my sanity if I deliberate even
further into the phone call I made a few hours ago to my friend who
owns a cell phone shop to get him to reload RM 30, RM 30, RM 50 and a
final RM 50 for a total of RM 160.

He didn’t have RM 100 denominations and I needed RM 150 to be safe,
so I asked for one RM 100 and one RM 50, but he only had the RM 50 and
RM 30 denominations, so we made do. One of the benefits of having a
friend who owns a cell phone shop – reloading is just a phone call away!

I didn’t even need to get off my ass, which, come to think of it,
feels rather numb. No worries, it’s probably due to the fact that I’ve
been sitting on this chair since early last night without much in the
way of movement. I guess you didn’t need to know that, but still, just
to put things in context…and er, where was I?

Okay, so I do run up high cell phone bills…15 cents per minute for
the friends and family package notwithstanding. Throw in the verbal
diarrhea that usually results from being tweaked and there’s a
dangerous combo for you. :p Well, that explains it then. There’s the
reason for the emergency call to reload…I let it run down to RM 60+.

Long story short, I talked a whole lot of nothing to a bunch of
people in different states (and one different country, to boot). I
can’t say I didn’t enjoy it, I did, and very much so. I like writing
and talking while tweaking. I usually opt for the former since its more
productive, but given distractions…well, you better hope I don’t call
you up in the middle of the night and attempt to hold a loud and
animated conversation, all the while goes off in tangents and assuming
that you’re enjoying it too. Pray that day does not come. 😉

Excuse me, I digress yet again…

Well, back on topic, in case you didn’t know, I don’t have a net
connection at home (long story), so I just use my SE K700 as a GPRS
modem. I was set! I took a few photos. I even had some choice ones from
this anonymous quack (in a well meaning way, I’m sure) who keeps
sending me “Words of wisdom” type SMS’s. I’m just going to switch
windows and make a brief update to my contacts list…

…and before I knew it, I found that the quick
single-address-book-entry detour I took turned into a full fledged
re-ordering, re-categorizing, re-entering, just plain fucking obsessive
reorganization, nay, overhaul of the entries until I got
everything into alphabetical order, grouped by state, and re-edited to
make sure all the entries have the same spacing between cell phone numbers…and I found out that 10 hours had passed. 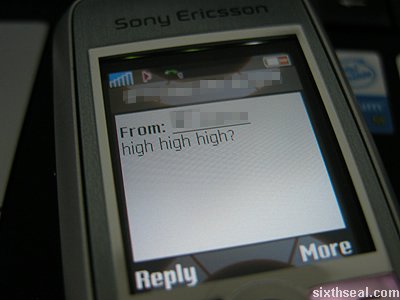 Not anymore. I was, but I blew it on the stupid address book. Now
I’m coming down hard and I have just written a single irrelevant post…

Oh well, at least I have a really organized contacts database now. :p