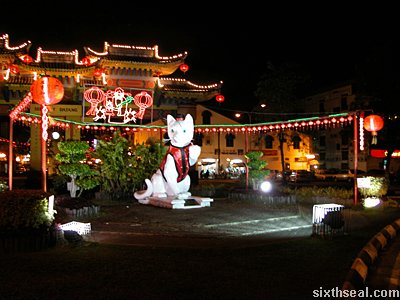 This is a picture taken just now at the landmark Jalan Padungan cat
statue. It’s wearing CNY clothes, so I decided to pull up beside it to
get a shot before the clothes are taken down. The locality of this
Kuching cat statue is right beside a roundabout, but I figured that it
would take all of 5 seconds to take a photo, so I just got out in the
middle of the road.

This is the same flawed logic that got me an obstruction of traffic
ticket (which is still outstanding) while I popped into the local
7-Eleven “for a couple of minutes”.

I did manage to take several shots of the festive cat statue in less
than 30 minutes and walked back…to see the car engine still running,
with the doors closed and locked. This didn’t look right, but it took
another 5 seconds to realize that I’ve somehow locked myself out of a running car parked in the middle of a busy roundabout at night.

My first thought was to break the driver side window, figuring that
it wouldn’t cost as much as the other windows to regain access to the
locked car, so I wrapped my hand with excess shirt material and
forcibly hit the window…

…which didn’t even produce a hairline crack. That’s a good thing
in hindsight; coz the shattering glass would probably necessitate a
quick trip to the hospital.

I looked around and found a fire station about 50 meters away.
Salvation! The Fire and Rescue Department would have something heavy to
break windows with.

I walked over and told the amused firemen about my predicament. The
head was aghast at the fact that I wanted to break the window to gain
quick access (had to meet someone) and offered to jimmy the lock for
me. I’ve thought about that too, but I haven’t really had much practice
doing it, considering grand theft auto wasn’t one of my career path
considerations…

Thus, the firemen trooped down to the roundabout. Imagine the sight
of about 13 firemen gathering around a car to force the lock open. It
was a sight to behold, I imagine… 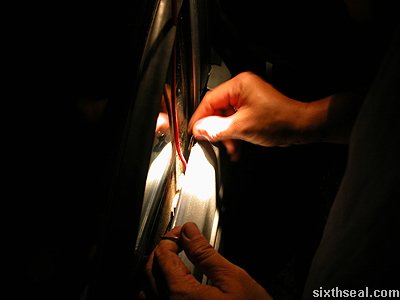 It just took 2 minutes for them to flip the lock and open the
passenger side door. I thanked the firemen and offered to buy them a
drink, which they accepted.

I learnt how to break into a locked car in 2 minutes flat today. Thanks firemen! 😉