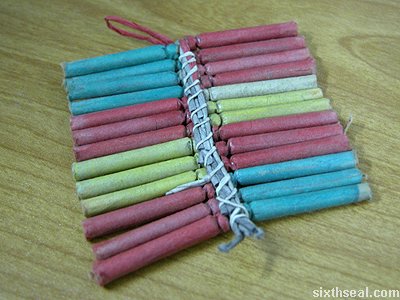 You might be aware of the existence of this variety of firecrackers
from China. It’s available in singles in a box slightly larger than a
cigarette pack. The firecrackers inside are short versions of the long
ones they traditionally let of at the stroke of midnight and these ones
are also used during weddings – the car entourage rolls down their
windows and let the firecrackers off right as the procession goes to
the restaurant (that is, until firecrackers were banned).

Well, one of my friends got some of these and we were playing around
with them on Saturday night (or Sunday morning, rather) after a night
of drinking and some Other Stuff (TM). I had one of them and was about
to get off when one of my friends called me and threw one at the cars
in front of my place, setting off the alarm, making me have to haul ass
upstairs so the neighbors won’t call the police. Asshole. 😉

Anyway, I realized that I still had one of them, and decided to
explore the dynamics of indoor firecrackers when lit in a confined
space (scientists prefer to refer to it as “a room”). 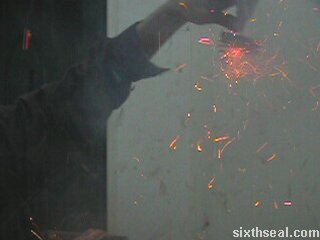 Okay, okay, so it’s not research, I was not very sober from three different things and I just wanted to have a lark. 😉 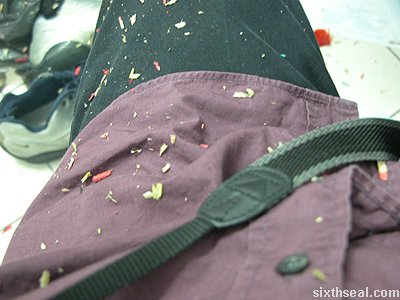 Ahh…*contented sigh*…nothing beats the smell of firecrackers in the morning. 😉